Bitcoin sinks below $19,000 as it breaks cycle peak record 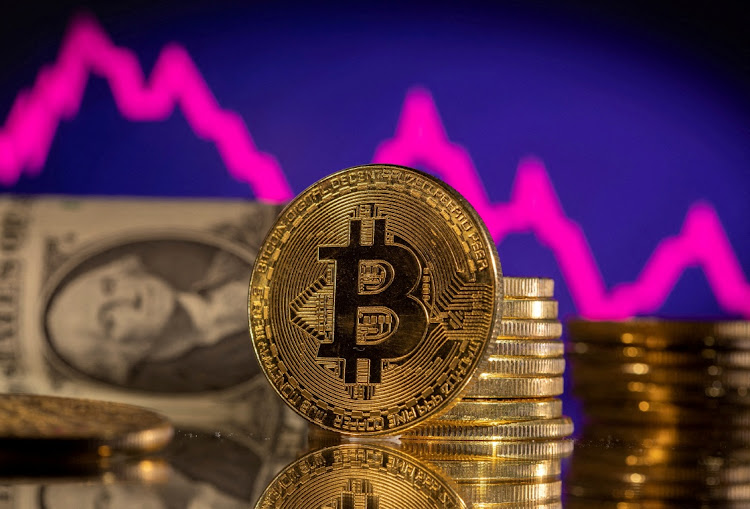 Bitcoin dropped below $19,000 for the first time since December 2020 as evidence of deepening stress within the crypto industry keeps piling up against a backdrop of monetary tightening.

The largest digital token by market value tumbled as much as 9.2% to $18,740 on Saturday, marking a record-breaking 12th consecutive daily decline according to Bloomberg data.

Ether breached $1,000 and dropped almost 11% to $975, the lowest since January 2021. The two bellwethers of the crypto market are both down more than 70% from highs set in early November.

“Global macro uncertainty combined with spectacular blow-ups in the crypto ecosystem has caused prices to fall at a rate that has surprised investors,” said Kunal Goel, a research analyst at Messari.

The latest leg-down pushed bitcoin below $19,511, the high the coin hit during its last bull cycle in 2017, which it reached at the end of that year. Throughout its 12-year trading history, bitcoin has never dropped below previous cycle peaks.

Alt-coins were no exception to soured investor appetite in the wake of bitcoin’s fall, with every token on Bloomberg’s cryptocurrency monitor trading in the red. Cardano, solana, dogecoin and polkadot recorded 24-hour falls of 8.3% to 12% on Saturday, while privacy tokens such as monero and zcash lost as much as 11%. 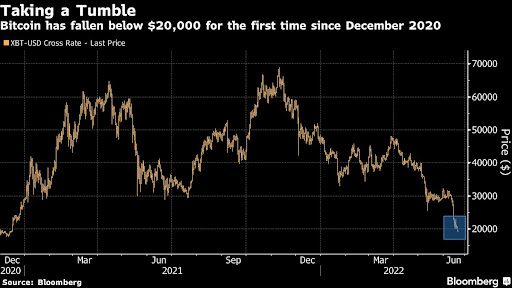 A toxic mix of bad news cycles and higher interest rates has been deleterious to riskier assets such as crypto. The Federal Reserve raised its main interest rate on June 15 by three-quarters of a percentage point — the biggest increase since 1994 — and central bankers signalled they will keep hiking aggressively this year in the fight to tame inflation.

“Investors are continuing to position defensively following last year’s liquidity-driven digital asset bull market,” Alkesh Shah, head of crypto and digital assets strategy at Bank of America, said in a note on Friday. “Though painful, removing the sector’s froth is likely [to be] healthy as investors shift focus to projects with clear road maps to cash flow and profitability versus purely revenue growth.”

Adding to the mood, crypto hedge fund Three Arrows Capital suffered large losses and said it is considering asset sales or a bailout, while another lender, Babel Finance, followed in Celsius’s footsteps on Friday. Even long-term holders who have avoided selling until now are coming under pressure, according to researcher Glassnode.

“After Celsius, the focus last few days has been Three Arrow Capital and Babel Finance.” said Teong Hng, CEO of Hong Kong-based crypto investment firm Satori Research. “Su Zhu, the founder of 3AC seems to be missing in action, after purportedly suffering huge losses due to huge drop in crypto this round.”

Stablecoins — a type of crypto asset pegged to the value of a fiat currency such as the US dollar — have also struggled.

The top four stablecoins saw exchange net outflows last week that were 4.5 times larger than the prior week, Bank of America’s Shah said, having charted net outflows in eight of the 10 previous weeks. Stablecoins are often relied upon by crypto traders to move funds around the ecosystem without needing to exit into traditional currencies, so persistent outflows indicate that investors remain defensive, he said.

Even with the piercing of the key $20,000 level, historical data show that bitcoin may find key support around that mark as previous sell-offs demonstrate where the token usually finds points of resilience, according to Mike McGlone, an analyst for Bloomberg Intelligence.

The crypto market now stands at a fraction of its heights in late 2021, when bitcoin traded near $69,000 and traders poured cash into speculative investments of all stripes. The total market cap of cryptocurrencies was about $870bn on Saturday, down from $3-trillion in November, according to pricing data from CoinGecko.