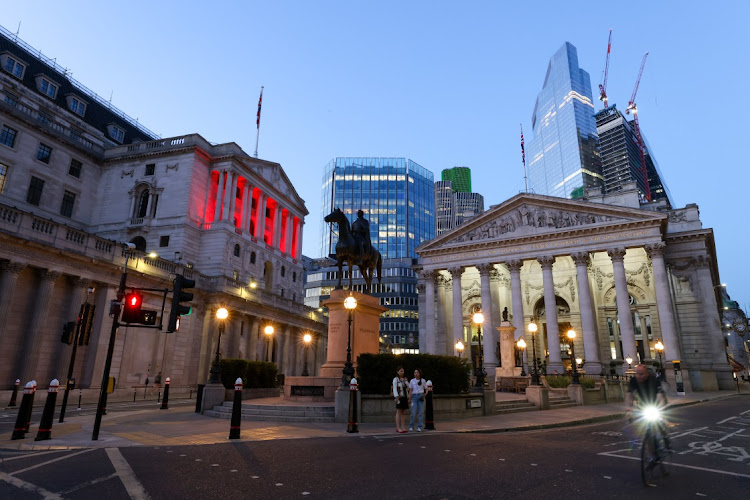 The Bank of England in the City of London, UK, June 15 2022. Picture: HOLLIE ADAMS/BLOOMBERG

The Bank of England (BoE) raised interest rates for a fifth straight meeting on Thursday and sent its strongest signal yet that it’s prepared to unleash larger moves if needed to tame inflation.

The nine-member monetary policy committee voted 6-3 to increase the benchmark lending rate by 25 basis points (bps) to 1.25%. A minority of officials maintained their push for a move double that size.

Policymakers led by governor Andrew Bailey hinted that they may join a growing global trend for larger hikes if inflation continues to soar, saying “it would be particularly alert to indications of more persistent inflationary pressures, and would if necessary act forcefully in response”.

Crucially, that language was endorsed by all of BoE’s voters, a departure from May when two declined to sign up to guidance that more hikes were needed.

The bank also raised its forecast for the peak of inflation this year to “slightly above” 11%, reflecting the planned increase in the energy price cap in October, and said it now expects the economy to contract in the current quarter.

“Even though the risk of recession is uncomfortably high, we think the central bank will take the plunge, raising rates by 50bps  in August. We then expect policymakers to revert to a 25bps move in September and November, taking the key rate to 2.25% by year end,” said Bloomberg economist Dan Hanson. 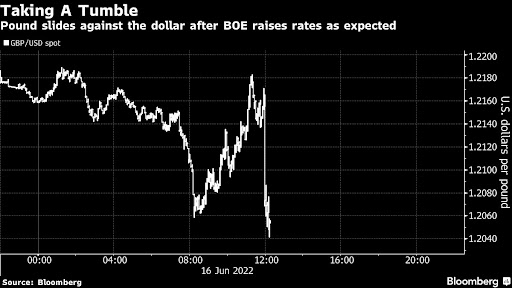 Investors raised their bets for further rate increases this year, pricing in a 3% base rate by the end of the year. That would likely require three half-point rate increases and a further quarter-point one at the remaining four meetings this year, an unprecedented pace of tightening.

For now though the BoE, which was first major central bank to hike rates after the pandemic, is moving slower than some of its peers.

The US Federal Reserve raised interest rates by 75bps on Wednesday, the biggest increase since 1994. The Swiss National Bank also surprisingly hiked rates by 50bps earlier on Thursday.

The BoE “continues to balance the inflationary effects on the economy with the very real chance that they tighten too much and the UK economy lurches into a full-blown recession”, said Alan Custis, MD at Lazard Asset Management.

But while the BoE is grappling with an inflation rate that has already hit a four-decade high of 9%, officials are also concerned about an economic slowdown that is putting the UK at risk of recession.

Data this week showed the economy contracted in April, and officials now predict it will shrink 0.3% in the second quarter, after previously expecting a 0.1% expansion. The longer-term outlook is also grim, with the Organisation for Economic Co-operation and Development (OECD) saying this month that it sees no growth in the UK in 2023 — the worst outlook among major nations.

The BoE’s move stirred unease among some economists and business groups, which are concerned about a dimming outlook for the economy. The British Chambers of Commerce said higher rates will “add further concern” on top of “soaring cost pressures, and labour shortages”, according to the lobby group’s head of research, David Bharier.

“It would seem somewhat short-sighted to keep chasing inflation upwards, especially if the consequence is deteriorating growth and the risk of recession,” said Melissa Davies, chief economist at Redburn, who dubbed the BoE’s outlook “increasingly myopic”.

Those BoE members who backed a 25bps move at the committee meeting, including Bailey, say demand might be starting to slow. But with prices soaring and officials seeing no signs of deterioration in the ultra-tight labour market, Michael Saunders, Catherine Mann and Jonathan Haskel all voted for a half-point increase.

Those members saw more prospects of a surprising resilience in demand or shortfall in supply. The minutes of the meeting said there were “mixed signs” on the extent to which the squeeze on living standards was weighing on consumer spending. Confidence has dropped but “indicators had held up”.

Either way, the trend for higher rates is clear, threatening to heap more pain on an already creaking UK economy, which is dealing with surging tax, fuel and food bills, along with political turmoil and the messy repercussions of Brexit.

Adding to the misery, next week railway workers are due to hold three days of strikes, which economists say will cost the nation almost £100m.

The decision is also the first since chancellor of the exchequer Rishi Sunak announced a multibillion-pound aid programme to help households cope with soaring energy bills, allaying some concerns of the depth of the nation’s cost of living crisis.

The BoE estimated that package will raise the level of output by 0.3% and inflation by 0.1 percentage point in the next 12 months “with some upside risks around these estimates”.

It’s the biggest increase since 1994, and central bank officials signal they will keep raising rates aggressively this year
News
2 weeks ago

The recent sell-off in global markets is contributing to a sharp contraction in financial conditions, possibly slowing inflation
World
2 weeks ago

Bank to halt its bond-buying programme on July 1 and will raise interest rates by 25 basis points, with further increase slated for September
World
2 weeks ago
Next Article