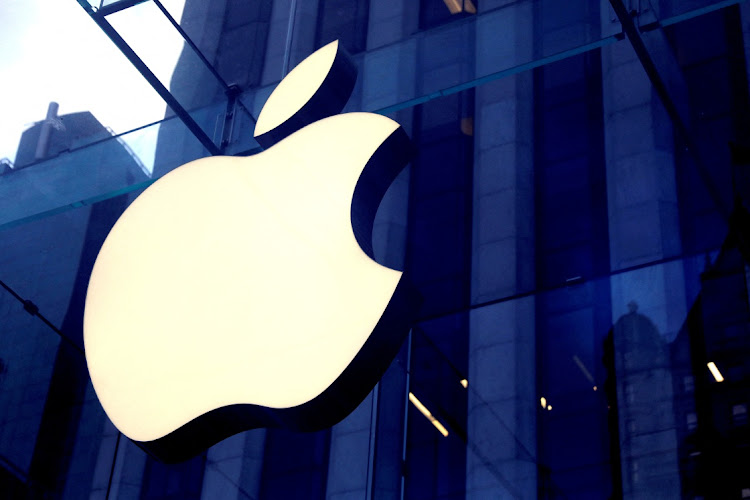 The Apple Inc logo is seen hanging at the entrance to the Apple store on 5th Avenue in Manhattan, New York, US. File photo: REUTERS/MIKE SEGAR

Apple’s run as a $3-trillion stock proved fleeting. Now its grip on a $2-trillion market value is looking wobbly, too.

After briefly surpassing $3-trillion in January, the iPhone maker has lost more than $800bn in capitalisation as tech stocks plunged. With concern growing that the Federal Reserve’s interest-rate increases could tip the US into recession, the $2-trillion milestone is looking precarious. Apple closed on Tuesday at $2.15-trillion.

“In the same way that Apple benefited from the Fed-fuelled bull market, it will suffer as the low interest rate and quantitative easing subsidies fade,” said David Trainer, CEO at investment research firm New Constructs.

Economists predict the Fed will raise interest rates Wednesday by at least half a percentage point, with some predicting a 0.75-point increase in the wake of Friday’s stronger-than-expected inflation data. Further increases are expected this year. All of that could deepen the sell-off in tech stocks, which are particularly vulnerable to higher interest rates as they weigh on the current valuation of companies’ future profits.

The FAANG cohort — Facebook owner Meta, Apple, Amazon.com, Netflix and Google parent Alphabet — were poster children of the two-year bull market, rallying at breakneck speed to scale historic valuations. That quickly evaporated in 2022 with the group losing a combined $2.6-trillion in market value as investors fled from growth names for safer assets. Amazon is also close to falling below $1-trillion.

Analysts have grown cautious, too. Over the past three months, they’ve cut their estimates for Apple’s fiscal third-quarter earnings by 7.8%, according to data compiled by Bloomberg. Revenue projections are down about 4.2% over the same period. The stock also has the lowest share of analyst buy ratings in more than a year.

KeyBanc Capital Markets sees signs of softer US demand, citing credit card data spending. Others have raised concerns about the pace of revenue growth at the company’s App Store, with Morgan Stanley adding that this poses risks to its estimates for Apple’s Services business. According to data compiled by Bloomberg, Apple derived 18.7% of its fiscal 2021 revenue and more than 30% of gross profit from services.

Apple’s stock woes have intensified this year with a 25% slump and Saudi Aramco snatching its title as the world’s most valuable company. Setting aside the headwinds that have broadly pressured tech stocks — rising interest rates, slowing economic growth and soaring inflation — the tech giant is also facing supply constraints related to Covid-19 restrictions in China. In April, it warned that it could take a $4bn-$8bn hit to revenues for the current quarter.

History shows that it can take years for technology stocks to climb back to the highs set in raging bull markets, assuming they ever do. Cisco Systems, a star of the late 1990s tech frenzy, is still 46% below its all-time peak  of March 2000.

“I would say that if an investor under-owns these names, then this is an opportunity to add to positions,” said Mark Luschini, chief investment strategist at Janney Montgomery Scott, which has about $130bn in assets.

“However, there are always names that lead in some eras, but then it takes years for them to them to regain their record levels. Just because they will continue to grow, that doesn’t mean these names will regain their former leadership.”

The stock market rout has pushed the Nasdaq 100 Index’s valuation down to 19 times earnings, the lowest level since the pandemic-induced sell-offs of March 2020. The tech-heavy index’s price-earnings ratio had scaled a multiyear high of 31 times in September 2020 as stock markets rallied amid low interest rates and booming demand for tech gear because of pandemic lockdowns.

Tech startups have drawn all the young, hot talent for more than a decade. Now the pendulum is swinging in the other direction.
Business
2 weeks ago

KATE THOMPSON DAVY: Google’s ghost in the machine: haunting and lamentation in the AI division

Can the internet giant be blamed for suspending the engineer who said chatbot LaMDA has a soul?
Opinion
2 weeks ago