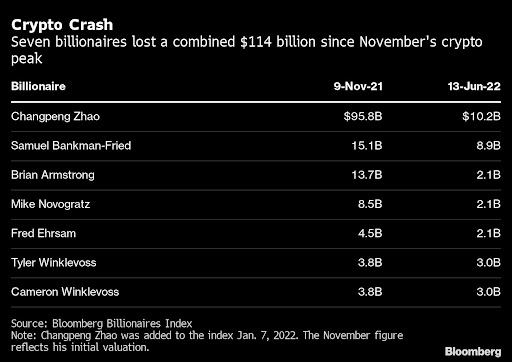 Seven of the world’s richest crypto evangelists have lost a combined $114bn since November as digital-asset values crumble. Picture: BLOOMBERG

One built a massive fortune that rivalled the wealthiest US tech titans. Another amassed a war chest that he vowed would change politics and philanthropy. Some were given a second chance at riches after past ventures flamed out.

The cryptocurrency craze turned Changpeng Zhao, Sam Bankman-Fried, Mike Novogratz and a handful of other digital-asset evangelists into billionaires several times over. But just as quickly as they became the new faces of global wealth, they are now seeing their fortunes vanish at an astonishing rate.

Worth as much as $145bn on November 9, when bitcoin reached a record high of almost $69,000, seven billionaires with fortunes tied to crypto have since lost a combined $114bn, according to the Bloomberg Billionaires index. Many others who have bet big on bitcoin, from Microstrategy CEO Michael Saylor to El Salvador President Nayib Bukele, are also feeling the effects as the price of the world’s largest digital token slumped below $21,000, the lowest level since December 2020.

Once seen as ushering in a new era of decentralised finance, crypto has been rocked by two high-profile implosions in the span of weeks. Celsius, one of the largest crypto lending platforms, announced on Sunday that it was freezing all transactions on its network after speculation it would be unable to meet returns promised on some of its products. That followed the collapse in May of so-called stablecoin TerraUSD and its sister token, Luna — which is memorialised as a tattoo on the left arm of Novogratz, the founder of Galaxy Digital Holdings.

While global markets are in turmoil as the Federal Reserve and other central banks plan to aggressively raise interest rates to fight the highest inflation in decades, the speed at which crypto has plunged in recent weeks stands out. And while there’s little evidence of cracks so far in the broader US labour market, the losses in digital assets have led some crypto billionaires to resort to job cuts.

Coinbase, the largest US crypto exchange, said on Tuesday it will lay off 18% of its workforce, citing the possibility of a recession that could lead to a “crypto winter”.

“We grew too quickly,” Coinbase founder Brian Armstrong said in a blog post announcing the cuts. “Our employee costs are too high to effectively manage this uncertain market. The actions we are taking today will allow us to more confidently manage through this period even if it is severely prolonged.”

Zhao, founder of Binance, the world’s largest cryptocurrency exchange, said his firm has “a very healthy war chest” and is expanding hiring. Still, he has seen his personal fortune, once the world’s 11th-largest, tumble 89% to $10.2bn since he debuted on the Bloomberg wealth index in January. His firm has also become a focal point for US investigators seeking to rein in the crypto industry.

Bankman-Fried, the CEO of crypto trading platform FTX, is down 66% since his fortune peaked at $26bn. That could dent his plans to give away his money and spend big in politics. He poured $16m into super PACs (independent expenditure only political committees) in April, making him one of the top donors to outside groups, and has said he expects to give more than $100m during the next presidential election to support Democrats.

Novogratz, whose macro fund at Fortress Investment Group was liquidated in 2015 after two years of losses, has staked his comeback on crypto, recently calling Terra a “big idea that failed”. His fortune fell on Monday to $2.1bn, lower than when he debuted on the Bloomberg Billionaires index in December 2020, when bitcoin traded at about $29,000.

Meanwhile, Cameron and Tyler Winklevoss saw their fortunes sag to $3bn each, from as high as $5.9bn apiece. The twin founders of crypto exchange Gemini, which announced earlier in June that it would cut about 10% of its workforce, are now touring with their rock band, Mars Junction.

Coinbase’s Armstrong and co-founder Fred Ehrsam, once worth a combined $18.1bn, have seen their fortunes shrink to $2.1bn each as shares of the company have tumbled 79% since its initial public offering.

As for Saylor, he is keeping the faith: He tweeted “In Bitcoin We Trust” on Monday, along with a new picture of himself surrounded by lightning. Microstrategy, the software company he founded that plunged in value during the dot-com bubble in 2000, began buying bitcoin in 2020. Its shares closed at a peak of $1,272 in February 2021, when the 2.36-million shares Saylor owns would have been worth $3bn. They have since plummeted about 88%.

Bukele, El Salvador’s president, had not tweeted about Monday’s plunge in crypto. About a week ago was the one-year anniversary of his push to make bitcoin legal tender. At the time, it traded at about $36,000.