Survey finds 76% of 4,507 young Africans across 15 countries named China as a foreign power with a positive influence on their lives versus 72% for the US 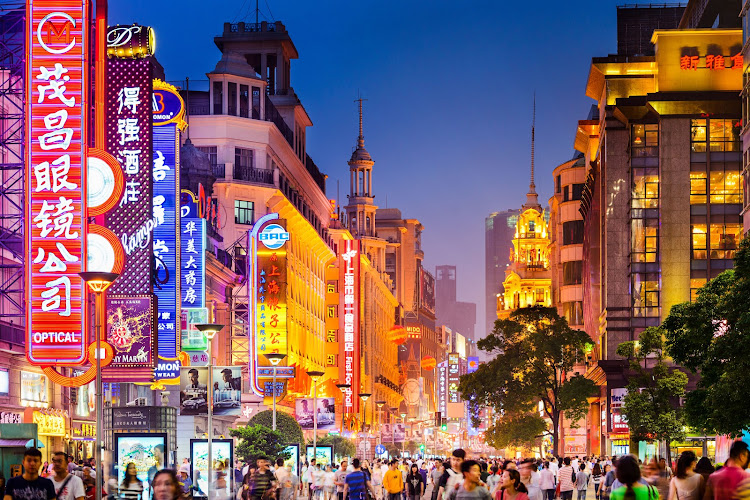 Nanjing Road in Shanghai, known for its abundance of shops: Picture: 123RF/SEAN PAVONE

China has overtaken the US as the foreign power seen as having the biggest positive influence in Africa by young people, according to a survey released on Monday.

A survey conducted by the Ichikowitz Family Foundation found that 76% of 4,507 young Africans across 15 countries named China as a foreign power with a positive influence on their lives, compared with 72% for the US. In 2020, when the inaugural study of 18-to-24-year-olds was conducted, 83% of respondents saw the US’s influence as positive while the figure for China was 79%.

The results are further evidence that China is winning the battle against geopolitical rivals such as the US and the European Union for the hearts and minds of Africans. Beijing has ploughed money into African infrastructure over the past two decades and supplies the continent with affordable consumer goods ranging from mobile phones and solar panels to shovels and plastics.

“We see China having climbed to pole position, we see a recognition of the fact that China is engaging in Africa at a time when very few others are,” Ivor Ichikowitz, chairman of the foundation, said in an interview in Johannesburg. “In Africa, America has played a very, very limited role, it has actually played an embarrassingly insignificant role in terms of actual investment, actual trade, actual building of infrastructure.”

In addition to its vast mineral and energy resources, Africa has the world’s most youthful population and is seen as a potential market for the future by countries ranging from France to India. In terms of perceived positive influence, the US has now slipped behind the UK and European Union as well.

“There is no question that China is the dominant player in Africa today,” Ichikowitz said. “Overall we are seeing a much more positive approach to China, that’s going to drive a lot more engagement with China.”

Positive sentiment towards China was strongest in Rwanda, Malawi and Nigeria. The survey, which involves lengthy face-to-face interviews, will be run annually. About 42% of the world’s youth are expected to be African by 2030.

Still, China’s influence is not seen as universally positive. Of those surveyed 56% said they believed the unverified conspiracy theory that Covid-19 was developed and intentionally spread by the Chinese government.

The survey also showed that young Africans have lost faith in their own governments, and are increasingly concerned about climate change and discrimination against women and ethnic minorities.

Key Findings of the survey: