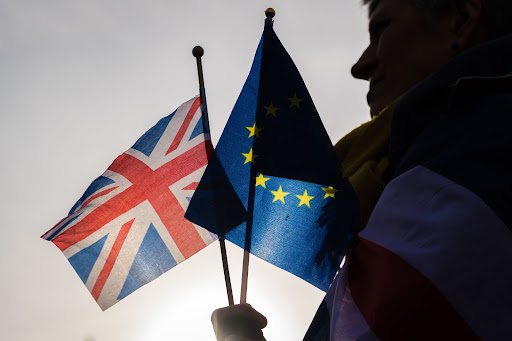 The UK unveiled legislation to override parts of the Brexit deal it signed with the EU, risking a trade war with the bloc, which threatened to take legal action.

The bill, tabled on Monday, seeks to hand the UK powers to unilaterally rewrite the bulk of the Northern Ireland protocol, which kept the region in the EU single market after Brexit, creating a customs border with mainland Britain. If passed, the new law would allow ministers to rip up the regulatory framework both sides agreed to in 2019 and replace it with new rules on customs checks, tax and arbitration.

“This is a reasonable, practical solution to the problems facing Northern Ireland,” foreign secretary Liz Truss said in a statement. “It will safeguard the EU single market and ensure there is no hard border on the island of Ireland.”

But the move risks reopening divisions between Prime Minister Boris Johnson’s government and the EU two-and-a-half years after the UK left the bloc, just as a unified approach to Russia following its invasion of Ukraine had bound them together again.

“Unilateral action is damaging to mutual trust,” Sefcovic said. The bloc’s reaction will be “proportionate”, including considering both continuing infringement proceedings that were put on hold in 2021 and opening fresh legal procedures that “protect the EU single market from the risks that the violation of the protocol creates for EU businesses and for the health and safety of EU citizens,” he said.

Irish Prime Minister Micheal Martin told reporters in Cork the move is “a new low point” and called for “substantive negotiations” to resolve the differences between the UK and EU.

Infringement proceedings have been suspended during negotiations over how the protocol operates and if unfrozen could ultimately lead to financial penalties being imposed on the UK. Other options open to the EU include suspending its trade agreement with Britain, stopping the privileged access UK companies have to the single market and halting talks over the status of Gibraltar, according to a person familiar with the matter.

The legislation opens up Johnson’s government to accusations that it’s breaking international law, and threatens to deepen Tory splits over Europe just a week after the premier scraped through a confidence ballot that saw more than 40% of his MPs vote against him. Some in his party want him to go even further in dismantling the protocol, while others have expressed concern about the damage to Britain’s international reputation caused by breaking an agreement.

The foreign office said in its statement that the plans are “consistent with international law” and aimed at protecting the 1998 Good Friday peace deal in Northern Ireland.

But Jonathan Jones, a consultant at Linklaters who resigned as the government’s most senior lawyer in 2020 over the UK’s then plans to alter the protocol, told Sky News that the government’s legal position, is “very thin and unpersuasive”. The bill “neutralises” large parts of the agreement “and gives ministers powers to turn off yet more, almost all of the protocol”, he said.

A White House spokesperson said the priority for US President Joe Biden’s administration is protecting the Northern Ireland peace process. They acknowledged challenges in implementing the protocol and urged the UK and EU to negotiate a solution.

The bill contains a provision for it to be replaced by a negotiated settlement if one is agreed with the EU. “In the meantime the serious situation in Northern Ireland means we cannot afford to allow the situation to drift,” Truss said.

Here’s what the bill aims to do:

Catherine Barnard, EU law professor at the University of Cambridge said in a phone interview that the bill “drives a coach and horses through the Northern Ireland Protocol”.

“All major aspects, especially the provisions on movement of goods, but also the role of the European Court of Justice,” are largely removed, she said.

The government wants to push the bill through the UK’s lower House of Commons before parliament breaks at the end of July, though it’s unlikely to become law for at least a year because of expected opposition in the upper chamber, the House of Lords.

Even after it becomes law, trading arrangements under the protocol as agreed with the EU will continue until ministers draw up and implement a replacement regime, according to the government.

Johnson’s government argues that the present deal threatens the peace agreement because the Democratic Unionist Party is refusing to participate in Northern Ireland’s power-sharing executive until the protocol is changed, effectively blocking the formation of a new regional government.

But even before the government set out its plans, senior DUP MP Sammy Wilson told Bloomberg that the bill won’t be enough to spur his party to join a new regional government. Without DUP participation, a new executive can’t be formed.

Truss outlined her plan to publish the legislation in a phone call with her Irish counterpart Simon Coveney earlier on Monday. During the 12-minute call held at the UK’s request, Coveney warned the move would be “deeply damaging” to British relations with Ireland and the EU, according to an Irish foreign ministry statement.

In a sign that Johnson’s plan risks causing further political upset in Northern Ireland, a majority of the region’s elected representatives cosigned a letter calling his approach “reckless” and one which “flies in the face of the expressed wishes of not just most businesses, but most people in Northern Ireland”.