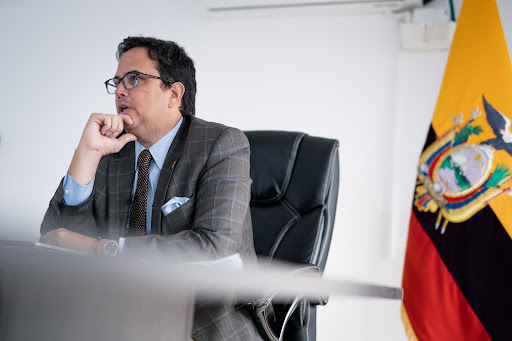 After a years-long deadlock, Ecuador and Chile have resumed negotiations over a partnership to develop a major copper deposit just as demand for the wiring metal is set to surge in a nascent clean-energy transition. Picture: BLOOMBERG

After a years-long deadlock, Ecuador and Chile have resumed negotiations over a partnership to develop a major copper deposit just as demand for the wiring metal is set to surge in a nascent clean-energy transition.

“That suspension generated positive conditions for talks,” Vera said on Sunday in an interview from Toronto, where he’s heading a delegation at the PDAC mining conference. “We have opened a line of contact with the highest executives at Codelco.”

Citing a confidentiality agreement, Vera declined to offer any details of the “excellent conversations,” or the likely timing of the project, which he said probably contains much more than the initial estimates. The project recently won a court battle over its impact on the pristine, heavily forested Intag Valley.

The resumption of Llurimagua talks comes as Ecuador’s President Guillermo Lasso looks to resolve the permitting bottlenecks and tense community relations that have held back development in the mineral-rich nation.

The administration is moving forward with development of a mining registry or cadastre, Vera said. It’s also working on a new competitive system of awarding exploration permits; introducing the right of free, prior and informed consent for indigenous peoples with regard to new projects; and planning regulation for companies’ minimum procedures for dealing with communities, he said.

Mining generated about $2.1bn (R34bn) in export revenue for Ecuador last year, double 2020 levels, and is projected to reach $10bn (R161bn) by 2030. There’s a handful of projects getting close to development stage, while Southern Copper’s giant Ruta del Cobre project isn’t too far behind. The Mirador operation is set to expand and Solaris Resources is progressing with its Warintza project.

Vera described it as “a very special moment” for Ecuador, despite some citizen resistance to large-scale mining in regions including Azuay.

Local residents in Intag have fought the development of the Llurimagua mine since the 1990s, protesting against threats to wildlife like spectacled bears and rare, endemic frog species.

A staunchly anti-mining candidate only narrowly lost a spot in the runoff vote to Lasso in the first round of the presidential elections last year. Umbrella indigenous organisation CONAIE protested against high fuel prices and mining policy, among other issues, early June 13, blocking major roads near Quito, Riobamba and Cuenca.

As mining projects around the world get trickier and pricier to find and develop, more companies are taking a serious look at Ecuador. They include Barrick Gold and Peru’s Cia de Minas Buenaventura , he said. Vera was also about to sit down with London-based heavyweight Rio Tinto Group: “I’m sure they are interested,” he said.