Gorillas in the midst of major cost-cutting and possible closures

Gorillas is among a group of firms that promise to ferry groceries to customers in as little as 15 minutes, but it is not clear if such fast deliveries can be made profitably 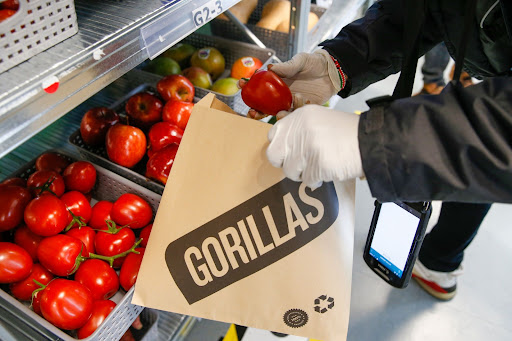 After Germany’s rapid food delivery startup Gorillas Technologies closed a $1bn funding round last October, the company launched its own record label and started plotting a move to a lavish office complete with vinyl decks and a mixer.

By the time it moved to a former brewery in Berlin’s chic Prenzlauer Berg neighborhood this week, just two years after it was founded, venture funding for tech startups globally had dried up and Gorillas management was focused on cost-cutting.

In May, the company slashed office staff by half, and it is now curtailing services in some markets and letting warehouse supervisors go, according to current and former employees who asked not to be identified because the information isn’t public.

The cuts have run so deep that the team in charge of the office relocation recruited people in other departments to help because they were shorthanded, according to internal messages seen by Bloomberg. Gorillas, valued at $3bn, has also reined in free-spending policies that allowed employees to take home Apple MacBooks and AirPods without registering them, and has been struggling to control the suspected abuse of delivery promo codes meant to lure first-time customers, several of the people said.

The company is considering proposals to close four warehouses outside of the UK capital, and one in Greater London, a Gorillas spokesperson said by email. Issues of equipment issued without proper documentation and fraudulent use of promotional codes were “isolated cases,” he added, and the Slack message was a reminder for employees to pack their belongings ahead of the move and the request for help was “completely voluntary”.

Gorillas, co-founded in May 2020 by CEO Kagan Sumer, is among a group of companies, including Instacart and Uber Technologies, as well as startups Getir and Flink, that promise to ferry groceries to customers in as little as 15 minutes. However, the industry is increasingly questioning whether such fast deliveries can be made profitably.

With funding suddenly scarce, the services are shifting to efficiency from rapid growth as inflation eats into margins and the war in Ukraine threatens the global economic outlook. European grocery delivery startups have raised $248m in 2022 this year to date, compared to a record $4.5bn in all of 2021, according to Dealbook data.

“The last five years were quite unusual in terms of access to capital,” said Christophe Maire, founding partner of FoodLabs, which invested in Gorillas’ October round. “We’re hopefully back to a state where a company becomes successful based on persistence, frugality and focus.”

Growing pains are normal for startups as they mature. Gorillas’ workforce exploded from 400 when it was founded in the early days of the pandemic to 15,000 in May. By the end of 2021, it was operating in nine countries and had struck high-profile deals with flagship grocers including Tesco in the UK and Casino in France. It also bought rival French delivery company Frichti in March.

“The business plan before had been every six to 12 months you’d do a big funding round,” said Citigroup analyst Monique Pollard. “All areas that are hyper-growth but are going to be loss-making or very investment heavy will need to be scaled back.”

Still, the breakneck expansion exposed oversights at the company, which prides itself in defying corporate stereotypes. Sumer posted his neck tattoo of a gorilla on his Instagram page, and the company holds live DJ sets to “energise the work environment”.

“Tech companies, especially low or negative margin tech companies, are facing a very strong headwind,” Sumer wrote in May in a letter to employees announcing the cuts. A leaner office would allow them to remain competitive and riders and warehouse workers weren’t affected, he said.

It was a reversal from February, when he announced plans to raise at least $700m in 2022 to fund development. After May’s cuts, he said the company would concentrate investment in Germany, the Netherlands, the UK, France and the US, while reevaluating its presence in other markets.

The company is also reducing management positions at warehouses in its core markets, according to current and former employees. Mariano Ciancio, a former deputy supervisor at a warehouse in the key market of Berlin, said his contract was not renewed “because of the restructuring.” Three supervisors told Bloomberg that they no longer had deputies.

Gorillas declined to comment on warehouse operations for competitive reasons.

Staff at Gorillas delivery warehouses have also complained about food waste, with perishables sometimes piling up because there’s no room in overflowing refrigerators, according to internal communications seen by Bloomberg. A Gorillas spokesperson said the company had less overstock than traditional supermarkets.

Gorillas struggled to control customers exploiting promo codes intended for first-time users, which allowed credit to be built up in dummy accounts, according to three people familiar with the issues. A Slack channel set up for employees to flag suspected fraud that Bloomberg viewed was shut down in April after approximately 50 cases were raised in a single day.

The Slack system was intended to offer guidance for managers, who have the authority to decide whether to deliver an order, and has been consolidated in a document, according to a Gorillas spokesperson.

In 2021, Gorillas let employees take home equipment without keeping track of its inventory, and some former workers kept Apple products after they were let go, according to three people familiar with the practice.

Despite the turmoil, Gorillas is seeking to stay true to its anti-corporate roots as it tries to become profitable. This week it launched its own brand of goods, but focused on craft beer, oat milk, and recyclable coffee pods.

With lockdowns easing, and consumers struggling with soaring costs of living, grocery delivery firms are battling
World
3 weeks ago

THE FINANCE GHOST: Sometimes, life gives you a Lululemon

Rules of thumb about retail models can be dangerous. Some models aren’t as defensive as they seem, whilst others boast a cult following of wealthy ...
Opinion
3 weeks ago