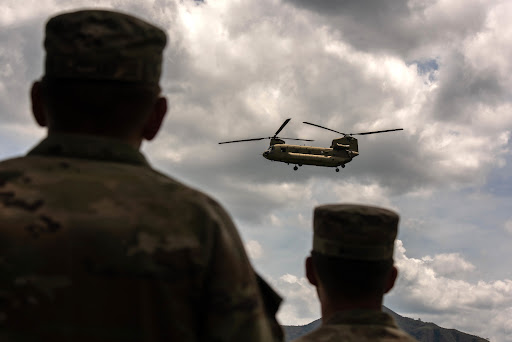 China’s defence chief issued one of the country’s strongest warnings yet on Sunday about the risk of war over Taiwan, even as he reaffirmed Beijing’s commitment to maintain peace in Asia.

In a speech to the region’s biggest security conference, Chinese defence minister Wei Fenghe repeatedly expressed Beijing’s willingness to fight to prevent a formal split by the democratically elected government in Taipei. The remarks on Taiwan were part of a broader response to defense secretary Lloyd Austin’s address a day earlier on the US’s Indo-Pacific strategy, which Wei blamed for pushing the two sides towards confrontation.

“If anyone dares to secede Taiwan from China, we will not hesitate to fight,” Wei told global security officials gathered for the IISS Shangri-La Dialogue in Singapore, reaffirming Beijing’s long-standing position on the dispute. “We will fight at all costs. And we will fight to the very end. This is the only choice for China.”

The US and China have used the annual gathering to lay out their competing visions for the region’s security in the wake of Russia’s invasion of Ukraine. While the Biden administration has found a receptive audience in Asia to calls for protecting the sovereignty of smaller nations, it’s also facing scepticism about its commitment to the region, where China is now the dominant economy.

The decades-old dispute over Taiwan, which relies on US military support to deter Beijing’s efforts to assert control over the island, consumed much of Austin’s first in-person meeting with Wei on Friday. The pair nonetheless agreed to meet further at an unspecified date, with the Chinese side saying they hoped the meeting was the start to more normal military communication.

In his speech on Sunday, Wei argued that US efforts to protect its global power by maintaining and expanding it alliance network were the main source of tensions from Ukraine to the South China Sea. China views the Indo-Pacific strategy and related groupings, such as the Quad — including Australia, India and Japan — and Aukus — with Australia and the UK — as an effort to contain its rise.

“To us, the strategy is an attempt to build an exclusive small group in the name of a free and open Indo-Pacific, to hijack countries in our region and target one specific country,” Wei said. “It is a strategy to create conflict and confrontation to contain and encircle others.”

The Chinese defence chief’s message was met with scepticism, illustrated by pointed questions from delegates about territorial disputes from neighbouring countries such India and Vietnam. Austin, by contrast, emphasised co-operation and attempted to reassure smaller nations didn’t need to take sides in the struggle between the world’s two largest economies.

Both “make rhetorical claims to uphold regional peace, but there is something utterly mendacious about China’s vision”, said Shahriman Lockman, a director at the Institute of Strategic and International Studies in Malaysia. “This was evident from the series of questions that followed General Wei Fenghe’s speech — all contained deep suspicions of China’s intentions.”

Wei said relations with India were “good,” despite arguing that the responsibility for border clashes between the two sides in 2020 was “not with the Chinese side”. He similarly described China and Vietnam as “good brothers, good friends”, while urging the Hanoi side to study the history of conflicts between the neighbours.

A former commander in charge of China’s missile forces, Wei defended its nuclear weapons development in response to a question about whether the country was expanding its programme. At the same time, he disclosed that all the nuclear-capable weapons displayed at a huge military parade in 2019, which included the DF-17 hypersonic ballistic missile and the DF-41 intercontinental ballistic missile, had since been deployed.

“China has always pursued an appropriate path for developing nuclear capabilities for protection of the country to prevent the scourge of nuclear war,” Wei said. “China will keep the amount of its nuclear arsenal to that level.”

The Chinese defence chief again denied providing material support to Russia’s invasion of Ukraine, even as he reaffirmed Beijing’s belief that the US was to blame for the conflict.

“I thought Wei Fenghe really misjudged the audience on the issue of Ukraine,” said Bonnie Glaser, director of the Asia programme at the German Marshall Fund of the US.

“What he said did not depart from what China has said all along, but he clearly pinned blame for the war on the US, and Nato, and I was a bit surprised that he didn’t at least say territorial integrity sovereignty should be respected.”

US president draws  parallel between Taiwan and Russia's invasion of Ukraine, prompting rebuke from Beijing
World
1 month ago
Next Article