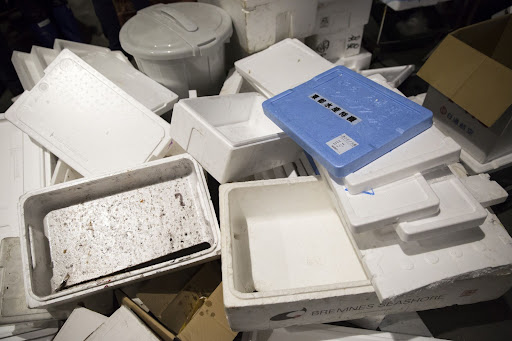 Larvae of the darkling beetle can survive on a diet of plastic, pointing to new methods of processing the planet’s tide of garbage.
Image: Bloomberg

Scientists in Australia have discovered that superworms can live and even grow on a diet of only polystyrene, also known colloquially as styrofoam. Superworm is a common name for the larval stages of the darkling beetle (Zophobas morio). The researchers described their finding as a “first step” in discovering natural enzymes that could be used to recycle this type of plastic.

“We envision that polystyrene waste will be collected, mechanically shredded, and then degraded in bioreactors with an enzyme cocktail,” said Chris Rinke, a scientist at the University of Queensland and an author of a paper published on Thursday in the journal Microbial Genomics.

Every year the world produces upwards of 400-million tonnes of plastic, and the durable material has become a garbage nightmare. Plastics are filling up landfills but also spilling into the natural environment, where they breakdown and poison wildlife, and have been introduced into the water cycle and even human blood.

In recent years, scientists globally have been looking for microorganisms that can digest plastic, which is how natural materials like wood biodegrade. The idea is that some kind of enzyme engineered from the gut of an insect or bacteria could be used to digest difficult-to-recycle plastic so it could be made into new plastic products, which would reduce the need for virgin plastic.

Used for things such as coffee cups and packing peanuts, polystyrene is one of the most common plastics in production. It accounts for “up to 7—10% of the total non-fibre plastic production,” according to the paper.

Experimenters divided worms into three groups and fed each a different diet: bran, polystyrene or a starvation diet. The worms that lived on polystyrene were not as healthy as those eating bran, but they were able to eat the styrofoam and gain weight and complete their life cycle.

However, the report also found that the diet had “negative impacts on host gut microbiome diversity and health” of the worms. In other words, they could eat plastics, but it had a cost to them.

It would theoretically be possible to keep thousands of worms in an industrial setting to digest plastics. But the researchers say their next goal is to identify and enhance the enzyme the worms use for future applications.