Shanghai to lock down seven districts as Covid infections rebound 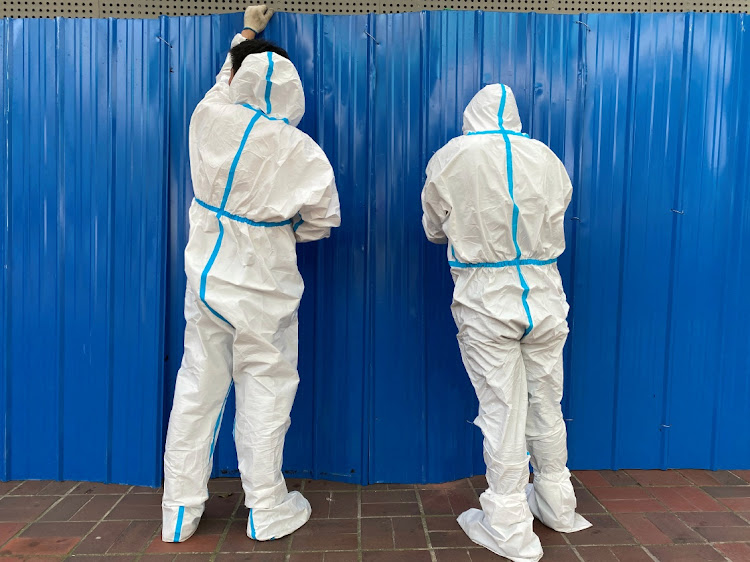 Workers in protective suits set up barriers outside a building during the Covid-19 outbreak in Shanghai, China's biggest city, on June 9 2022. Picture: REUTERS/ANDREW GALBRAITH

Shanghai will lock down seven districts at the weekend to conduct mass Covid-19 testing drives, its first major movement restrictions since the financial hub exited a bruising two-month shutdown at the beginning of June.

The temporary lockdown, which will affect millions of people across the Pudong, Huangpu, Jing’an, Xuhui, Hongkou, Baoshan and Minhang districts, comes as infections detected in the community rebounded to six at 5pm local time on Thursday, up from none the day before.

Four of the six cases were reported in Minhang, a district of 2.65-million people in the southwest of Shanghai. Minhang will be sealed on Saturday morning for mass testing, while the other districts didn’t specify how long their lockdowns would last.

The moves are raising concerns that the city’s reopening is backsliding as officials fear a resurgence of infections after social and economic activity resumed. Residents face the risk of being confined to their homes for another two weeks if any Covid infections are discovered during mass testing, in line with China’s Covid-Zero policy.

The government also appears to be escalating curbs and placing apartment blocks back under lockdown at the slightest hint of infection risk. Some housing compounds in the central Jing’an and Xuhui districts were sealed for 14 days from Tuesday, though only close contacts — no confirmed cases — were detected among residents.

The threat of renewed restrictions is looming over all of Shanghai as the city tentatively emerges from the lockdown implemented in late March. While most residents have been able to move freely since the beginning of June, millions are still grappling with varying limitations and the abrupt imposition of new curbs.

The constant risk of resurgence and the measures needed to prevent infections underscores the stress stemming from the zero-tolerance strategy still followed in the world’s most populous country. In the capital Beijing, which has been struggling with a long but low-level flare-up, authorities tightened rules again after a cluster of cases at a bar ended a five-day streak of zero community spread.

Mass testing resumed on Thursday in several neighbourhoods in Beijing’s eastern Chaoyang district, known for its skyscrapers and glistening retail outlets, while entertainment venues such as internet cafes and karaoke parlours were closed. More inspections are planned across the city.

“The risk of Covid’s covert spread remains and it sounds an alarm once again that our epidemic control and prevention must not have an iota of relaxation,” said Xu Hejian, a spokesperson for the Beijing municipal government.

China reported 164 infections nationwide on Wednesday, including nine in Shanghai. Most of the country’s cases were in Inner Mongolia, in the north, where the number rose to 130 from 81 the previous day and some areas remain locked down.

Even before mass testing drives, people in some affected areas in Shanghai’s Xuhui and Jing’an districts had been barred from leaving their homes and are subject to a daily Covid test, according to the latest policy. Others will be quarantined for seven days, followed by another week of health monitoring at home. During the control period, all vehicles in the regions are banned, except for buses and ambulances, according to government statements.

While the vigilance in China’s cities has escalated, national health officials are trying to rein in some over-zealous efforts to root out the virus in smaller, less economically important places.

Not every city in China needs to do regular Covid mass testing, and results shouldn’t always be required for using public transportation and entering public venues, officials at China’s National Health Commission said on Thursday.

Testing should focus on people with high-risk exposure and those in places with outbreaks, said He Qinghua, an official from the National Health Commission.