China’s suspicions have settled on North Korea, with authorities urging residents living by the Yalu River that runs between the two countries, to close their windows on days with southerly winds 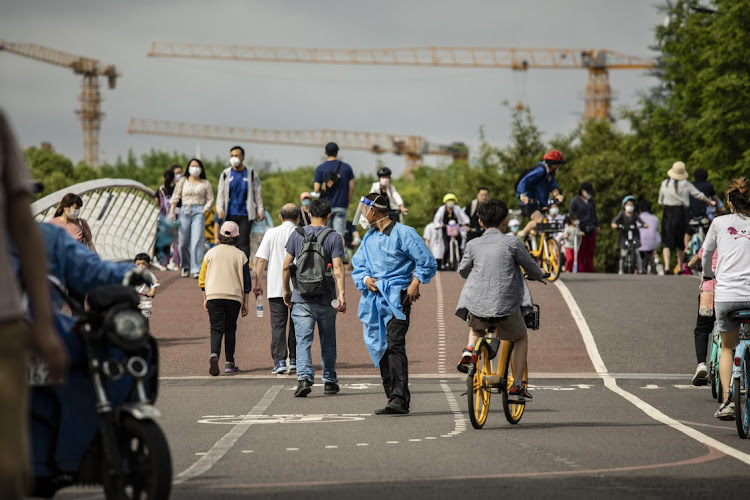 Officials in a Chinese city on the border with North Korea say they cannot figure out where persistent new Covid-19 infections are coming from, and now suspect the wind blowing in from their secretive neighbour.

Despite being locked down since the end of April, daily cases have been trending up in Dandong, a city of 2.19-million. Most of the infected people found in the community during the past week had not been outside their housing compounds for at least four days prior to their diagnosis, according to the city’s Center for Disease Control.

While the virus is flaring elsewhere in China, including in its northern regions, officials say they are unable to establish a chain of transmission. Their suspicions have instead settled on their neighbour, with authorities urging residents living by the Yalu River that runs between the two countries to close their windows on days with southerly winds, according to a government notice. They’re also being asked to go for more frequent testing, said a Dandong resident, who asked not to be named for fear of reprisal.

There isn’t any clear scientific evidence backing up the theory. Research shows that infections through airborne transmission are unlikely over long distances, particularly in outdoor settings without repeated exposure. And not everyone in China is convinced. Many social media users scoffed at the suggestion that the virus could travel in the air for hundreds of metres.

Still, some residents suspect authorities are considering the possibility that the virus is being carried through the air from North Korea, the person said. The isolated nation is experiencing a full-blown crisis with suspected cases topping 4-million since late April, according to the state-run Korean Central News Agency.

Representatives from the Dandong and Liaoning health authorities said they had no details about the virus spreading through the air when reached by phone.

North Korea and China share a porous 1,300km border, in some areas separated by the Yalu River that is less than 1km wide in parts of Dandong.

The city is a key trading hub for the two countries. About 70% of North Korea’s foreign trade went through Dandong prior to the pandemic. Rail freight between Dandong and neighbouring Sinuiju city in North Korea has been suspended for much of the pandemic.

Ben Cowling, chair of epidemiology at The University of Hong Kong’s School of Public Health, said it is unlikely that the infections could spread over long distances, carried by the wind. Viruses don’t survive particularly well under sunlight and in open air, he said.

It’s more likely that the movement of people, either across the border or within the city, is causing spread, said Peter Collignon, professor of infectious disease at the Australian National University. Just because Dandong has been in lockdown for more than a month doesn’t mean no human contact at all; essential workers would be out and about for example, Collignon said.

The advice to close windows “might be detrimental, you are better off having fresh and open air,” he said. “If that theory is promulgated, it makes people stay inside more, where you’re more likely to get infections from other people.”

The flare-up underscores the challenges China faces in adhering to its Covid-19-Zero goal as the virus becomes ever more transmissible and contact tracing breaks down. China’s border towns have been subject to some of the harshest containment measures of the pandemic as the virus persistently seeps in. Ruili, a city on China’s border with Myanmar, has been in lockdown intermittently for more than 160 days, according to local media reports.

A new resurgence in Inner Mongolia is also centred on a border city Erenhot, the largest port city between China and Mongolia, with a population of 74,179. It has been in lockdown for the past week and authorities started a dragnet operation on Sunday aimed at checking every household to verify virus information and register residents.

Inner Mongolia reported 81 of the country’s 124 local cases for Tuesday.

Beijing reported no new cases as of 3pm on Wednesday, with officials saying all chains of transmission in the city had been broken. Meanwhile, the southwestern district Fengtai will join the rest of the capital in removing restrictions, allowing public transportation to resume, people to return to the office and restaurants and entertainment venues to reopen.

Shanghai recorded 15 infections on Tuesday. Relief over last week’s lifting of a gruelling lockdown has been curtailed somewhat by an uptick in cases outside government-mandated quarantine, with four cases found in the community.

Child vaccination rates in the US fell during the Covid-19 pandemic as many parents did not have their children vaccinated and states eased vaccine ...
World
3 weeks ago

Preferred stimulus of focusing on businesses and infrastructure will not be enough to drive recovery in consumer spending, say analysts
World
3 weeks ago

But while Shanghai continues to reopen, sporadic community cases have resulted in some residential compounds being locked down again
News
3 weeks ago
Next Article