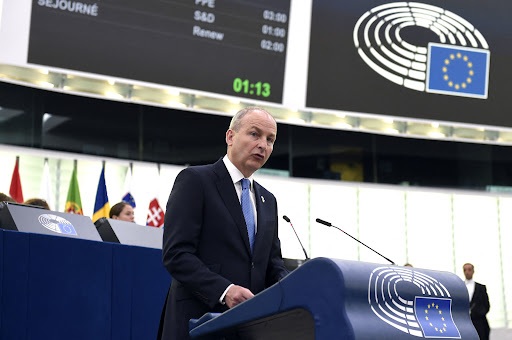 The UK has displayed “bad faith” in how it has approached the part of the Brexit treaty dealing with Northern Ireland, Irish Prime Minister Micheál Martin said.

“It is perfectly reasonable to look for ways to improve the operation of the protocol — but unfortunately what we have seen are bad-faith efforts to undermine a treaty freely entered into,” Martin said in an address to the European parliament on Wednesday. “Instead of trying to create a constructive atmosphere for all to engage, we have actually seen efforts to block agreements or introduce new problems.”

The UK government has long been pushing to rewrite the Northern Ireland Protocol, which keeps the region in the EU’s single market while creating a customs border with the rest of the UK. Prime Minister Boris Johnson plans to introduce legislation as soon as Thursday to give ministers the power to override parts of the deal, though the timing could slip, according to people familiar with the matter.

Officials signalled in May the government was eyeing the fortnight after June 6 to introduce the legislation. A delay beyond that would bolster the impression that legislating has been made a lot more difficult by Johnson’s narrow victory in a confidence vote on Monday, which laid bare the strength of opposition to him within the party.

The EU has urged Johnson to continue negotiating over ways to amend the protocol, rather than scrap it. The bloc proposed a set of possible changes last autumn it said would help smooth out problems for people in Northern Ireland.

The protocol has angered unionists in Northern Ireland because it treats the region differently to the rest of the UK, but the EU notes that the deal grants Northern Ireland unique access to the EU common market and the UK. EU member states and senior US politicians have warned unilateral efforts to scuttle parts of the arrangement risk jeopardising hard-won peace and stability in the region.

“The UK government is not giving due consideration to the totality of what’s involved in the Good Friday Agreement,” Martin said, referring to the political agreement on how Northern Ireland is governed and largely brought an end to sectarian violence.

Unilateral action from the UK risks a retaliatory move by the EU, potentially disrupting trade and raising prices. The EU is likely to consider unfreezing its infringement procedure against London, suspending its trade agreement, freezing the privileged access UK companies have to the bloc’s single market and halting talks over the status of Gibraltar, according to a person familiar with the matter.

Martin reiterated that he believes solutions can be found to issues surrounding the protocol, but only with partnership from the UK.

“Unilateral action to set aside a solemn agreement would be deeply damaging,” he said. “It would mark a historic low-point signalling a disregard for essential principles of laws which are the foundation of international relations. And it would — quite literally — be to the benefit of absolutely no-one.”

On Monday, the UK prime minister barely survived a confidence vote, with more than 40% of his MPs against him
News
3 weeks ago