The $20.6bn drop from March was the largest decline on record, says commerce department 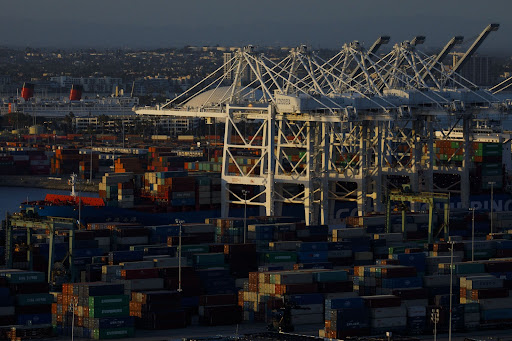 The US trade deficit shrunk in April by the most on record in dollar terms, reflecting a drop in the value of imports amid Covid-19 lockdowns in China while exports climbed.

The gap in goods and services trade narrowed by $20.6bn, or 19.1%, to $87.1bn, commerce department data showed on Tuesday. The median estimate in a Bloomberg survey of economists called for an $89.5bn deficit. The figures aren’t adjusted for inflation.

Imports dropped in April as factory activity in China fell to the lowest level since February 2020 amid strict lockdowns to curb the spread of Covid-19. While manufacturing in the country has improved somewhat since, the measures are still straining already tenuous global supply chains, especially when coupled with Russia’s war in Ukraine.

The deficit with China decreased in April by $8.5bn, the most in seven years. Imports dropped $10.1bn, also the most since 2015.

Decades-high inflation is expected to weigh on trade this year, with the World Trade Organization cutting its forecast for growth in global merchandise volumes. So far though, in the US, that hasn’t materialised yet, judging by the near-record amounts of goods that arrived at the ports of Los Angeles and Long Beach in April.

In the first quarter, the widening of the trade deficit largely explained the economy’s worst performance since the pandemic recovery began, with GDP shrinking at a 1.5% annual pace. That’s because the value of products American businesses and consumers bought from overseas outpaced purchases of US goods and services by other economies.

Economists don’t expect another contraction in the second quarter. If anything, a sustained narrower deficit — helped by growth in real net exports — should make a positive contribution to GDP, said Rubeela Farooqi, chief US economist at High Frequency Economics.

“Overall, supply-chain dislocations and shortages have persisted, but exports and imports remain historically high,” Farooqi said in a note. “The gap between the two is well above the pre-pandemic trend, a trend that is likely to continue for now.”

US merchandise imports plunged from a record in March, dropping 4.4%, the most since April 2020, reflecting a decline in inbound shipments of consumer goods, industrial supplies, capital goods and automobiles.

Retailers such as Target and Walmart are trying to offload excess inventory, accumulated in part as consumers shift more of their spending from goods to services. That may portend fewer imports ahead.

On an inflation-adjusted basis, the April merchandise-trade deficit narrowed 14.2% to $116.2bn.

Travel exports — or spending by visitors to the US — rose to $10.7bn, the highest since February 2020, while travel imports, a measure of Americans travelling abroad, climbed for a third month to $8.3bn, also the most since the onset of the pandemic.

Campaign was designed to generate conversation about the importance of independent, non-biased research in making investment decisions, the SEC says
News
1 month ago