But while Shanghai continues to reopen, sporadic community cases have resulted in some residential compounds being locked down again 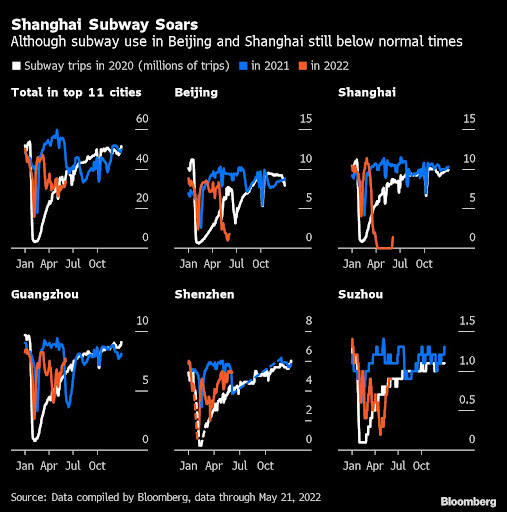 Infections are trending down nationwide, thanks to the ebbing outbreaks in Shanghai and Beijing. Of China’s top 50 cities by economic size, none currently have widespread restrictions in place. Tianjin hasn’t reported any local cases for the past three days and most public transport has resumed, while Beijing is resuming dine-in services and reopening parks and entertainment venues.

However, public transport remains suspended in the Fengtai district and some parts of Changping in the capital. Shanghai reported three cases found outside of the quarantine system on Sunday. While the city continues to reopen, the sporadic community cases have seen some residential compounds locked down again.

The spread of the highly contagious Omicron variant spurred increasingly stringent pandemic curbs in China from March to early June, in some cases triggering lockdowns that carried heavy costs for the local population and economy. The restrictions show the country continues to pursue a zero-tolerance strategy to contain outbreaks. Tracking the cases and the curbs could offer insight into what regions may be vulnerable to disruption in the days ahead.

As the outbreak has subsided people are going out more, at least locally, though not as much as year ago. Nationwide subway usage for the week ending June 4 in the top 11 cities was down 24% from the same time in 2021. Excluding Shanghai, ridership in China was down 6%.

People took almost 2.4-million rides on Shanghai’s subway on Saturday, well above the 30,000 of the previous Saturday. They took about 9.8-million subway rides on average each day in 2021.

The outbreak has hit people’s willingness to travel long distances, with passenger trips during the just ended holiday weekend down 40% from the same period in 2021, CCTV reported Sunday. However, domestic air travel has continued to slowly recover, with a jump in flights Sunday, which was the last day of a holiday weekend.

The rebound in trucking in Shanghai is still slow, with truck traffic only at about a third of its average in 2019, before the pandemic.

While Shanghai is now reopening and all companies were to resume production from June 1, it will take a while for manufacturing and consumption in the city to return to normal.

Activity at the city’s port, which is the world’s largest, picked up in May but is still below the level before the lockdown. There will likely be a strong rebound in shipments from the port and the city’s airports over the next two weeks, state media reported Monday.

Some Beijing residents return to work, while Shanghai moves towards lifting lockdown
World
2 months ago