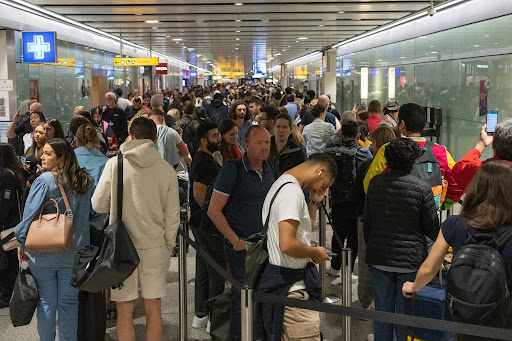 Travellers wait in a long queue to pass through the security check at Heathrow in London. Picture: CARL COURT/GETTY IMAGES.

Commuters returning to work in London on Monday after the Platinum Jubilee holiday were met by a subway strike that disrupted journeys and prompted some to take expensive taxi rides or board packed buses.

The Tube’s Victoria, Circle and Waterloo & City lines were closed, with limited services on the Piccadilly, Central, District and Bakerloo routes. The National Union of Rail, Maritime and Transport Workers (RMT) said as many as 4,000 staff would strike, while Transport for London urged people to avoid non-vital travel and said disruption could continue into Tuesday.

The chaos on the subway comes after hundreds of flights were cancelled at airports across the UK over the holiday weekend amid widespread staffing shortages, handing Britons a sharp reminder of the country’s domestic woes after four days of celebrations.

Dotted among coverage of national festivities to celebrate Queen Elizabeth II’s 70 years on the throne, UK media featured numerous images of lines of frustrated airline passengers. At Manchester airport some were even filmed crawling through a baggage carousel barrier in a bid to retrieve their luggage.

London Gatwick Airport said 52 departures and 30 arrivals were scrapped on Sunday, many of them operated by easyJet, which axed 80 flights in total across Europe. North of the capital at Luton, about 3,000 passengers were diverted after a power failure, The Independent reported.

Under pressure from the airline industry to relax immigration rules to ease recruitment, the government pushed back and highlighted three issues, saying airlines had cut too many jobs during the pandemic, failed to plan for a surge in passenger numbers, and sold too many tickets.

“I think cuts went too deep,” Transport Secretary Grant Shapps said on BBC TV Sunday, dismissing the notion that Brexit was a significant factor behind job losses in the sector. “We’ll work with the industry very hard between now and the summer to make sure we don’t see a repeat of those scenes.”

Heathrow airport has demanded airlines reduce the number of passengers flying from its terminals at certain times of the day by a third until July 3, The Times of London reported.

Travel by sea hasn’t been much better over the weekend, with major congestion in and around the French ports of Dunkirk and Calais adding to the sense of chaos. Ferry operator DFDS asked passengers on Monday to allow for 90 minutes to complete passport control and check-in formalities, saying it was expecting a busy day in Dover.

One bright spot: The walkout won’t affect the new Elizabeth line that connects the west of London to the City and onwards into Essex.

Queen Elizabeth lauded for 70 years of service to the UK

The 96-year-old has had to cancel  engagements recently due to an ‘episodic mobility problem’, and reluctantly pulled out of Friday’s service after ...
World
3 weeks ago
Next Article