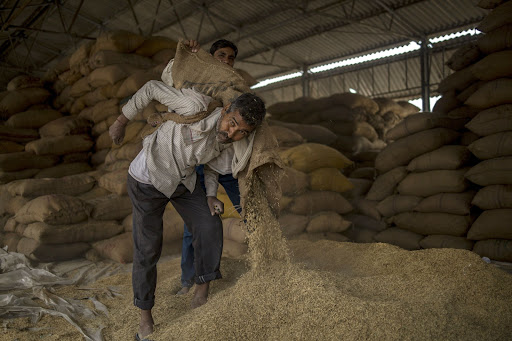 Rice farmers in India, the top exporter, will be working full tilt this growing season to take advantage of a good monsoon and prospects that the government will boost grain purchases to safeguard food security.

Rice has come into focus recently on worries that India may restrict exports of the crop next, after similar moves in wheat and sugar. Ample production will ensure the country has enough rice supplies and allay concern about curbs on overseas sales, which could have a devastating effect on global food security.

Charanjit Singh Gill, a farmer in Punjab — a region known as the country’s food bowl — said he will keep planting rice as it is the best option during the rainy season. Rice in most Asian farms requires large amounts of water to grow.

“I expect the government will buy more rice this year from us as they have to ensure the country’s food security,” Gill said.

India is likely to see plentiful monsoon rains, which will spur farm production and overall economic growth. The government plans to distribute more rice to the needy after its wheat purchases for the food aid programme fell by more than half due to lower output and as private traders offered better rates to farmers.

A record-shattering heatwave in March and April damaged wheat yields across the South Asian nation, prompting authorities to restrict wheat exports in a bid to secure India’s own supplies. The government is worried about inflation with food costs surging globally as the war in Ukraine chokes critical crop supplies.

Anil Kalyan, a farmer in Haryana, said he has prepared his rice nursery and plans to grow the crop on his entire 16ha of land this year.

“There will be more demand for rice this year and prices will rise because of the shortage of wheat in the country,” Kalyan said. There are no issues with the availability of fertilisers at the moment, he added.

While rice acreage and production are expected to be stable or slightly higher this year, growers say, it may not remain the case for the years to come. It all depends on prices and the availability of water.

Trinadha Reddy, a farmer in Andhra Pradesh, said he is able to sow rice on his 10-acre farm on time as water supplies through a canal improved this year. However he plans to shift to oil palm from next year as prices have stayed high and India does not produce enough vegetable oils to meet its own demand.

Farmer Gill in Punjab echoed this sentiment. “If we get better prices for other crops then we will think about shifting from rice,” he said. “Ideally we should be reducing the area for rice because of a shortage of water.”

MARK BARNES: SA could be a breadbasket if we get our agri-act together

With our natural endowments, we could be selling food to Europe
Opinion
2 months ago

With memories of the Arab Spring unrest in the early 2010s in mind, investors are fleeing emerging market nations threatened with crippling food ...
News
2 months ago
Next Article

US wheat crop is in trouble

US wheat crop is in trouble