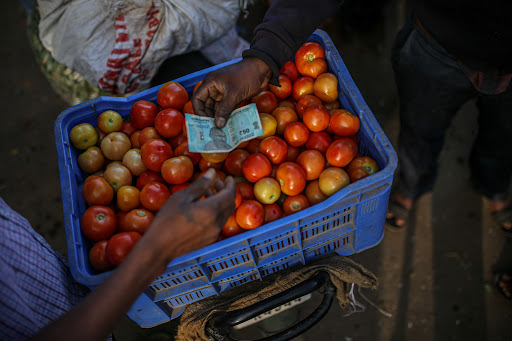 Tomato prices are surging in India, putting politicians on notice as vegetables have an unusual history of toppling governments in the country.

Tomatoes, potatoes and onions form the holy trinity of Indian cooking, where they’re often mixed with spices to form the base for curries, such as chicken tikka masala. The average retail price of tomatoes in India has jumped 70% from a month ago and 168% from a year earlier to 53.75 rupees a kilogram as of Tuesday, according to data compiled by the food ministry.

The costs of everything from cooking oil to wheat flour have climbed in India, stoking inflation to an eight-year high in April and squeezing household budgets. The government has risked global ire by restricting wheat and sugar exports and the central bank is seen heading for another interest-rate increase in June after surprising with a hike in May. A dovish member of the central bank’s rate-setting committee has said food prices had risen more than the monetary authorities had expected.

Soaring food prices, including tomatoes, may also have a political effect as the governing Bharatiya Janata Party is set to face voters at the end of the year in Prime Minister Narendra Modi’s home state of Gujarat, a campaign that will set the tone for his re-election for a third time in 2024.

During Modi’s 2018 campaign, he famously said farmers are his “top” priority, explaining that “TOP” means “Tomato, Onion and Potato”.

There is a shortage of tomatoes, said Prem Bais, a vegetable vendor in Mumbai. Supplies from the old harvest are dwindling and a new crop will only arrive in about three months, said Bais, who is now selling tomatoes at about 80 rupees a kilogram, up from as much as 50 rupees two months ago.

Mango prices are also rising in some areas after unusually hot weather slashed output. Prices of the popular Himsagar variety have doubled in Kolkata, the capital of West Bengal, from 50 rupees in 2021. Production of mangoes has slumped about 40% in the state, partly due to heatwaves in previous weeks, according to Kamal Dey, president of the West Bengal Vendors’ Association.

India endured a record heatwave in March and April, with temperatures in some places reaching almost 50°C. The blistering heat damaged India’s wheat output, prompting authorities to restrict exports that the world was counting on to alleviate shortages caused by the war in Ukraine. India has also curbed sugar exports to protect its own supply.

“I have to pay higher prices as I can’t pick just one child to feed,” said Sushma Sonde, a domestic helper in Mumbai, adding that the costs of everything have risen. “I have two children and they’re both my own.”

Voting started in Uttar Pradesh on Thursday in the first of a series of local elections that will be a key test of the popularity of Prime Minister ...
World
4 months ago

Singapore relies largely on imported food, energy and other goods, and nearly all of its chicken is imported
World
3 weeks ago

Significant increases (5% and above) were on cooking oil, potatoes, onions, chicken livers, carrots and spinach
National
3 weeks ago
Next Article