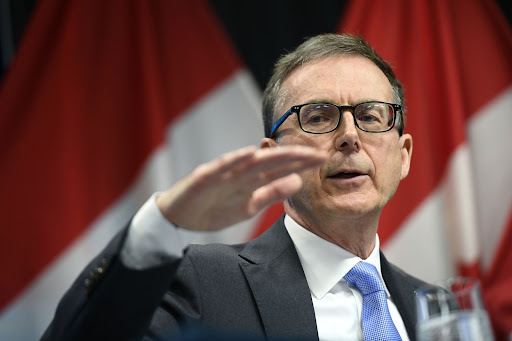 The Bank of Canada took another aggressive step in its hiking cycle, raising its overnight interest rate by 50 basis points (bps) for a second consecutive time and warning that it may act “more forcefully” if needed to tackle inflation.

The central bank raised the overnight rate to 1.5% at a policy decision on Wednesday and delivered a hawkish statement that aired worries about inflation pressures intensifying and becoming entrenched at elevated levels.

While the 50 bps hike was expected, the language will fuel speculation that policymakers led by governor Tiff Macklem are considering a faster pace of tightening than they had been suggesting. Markets are pricing in another half-point increase at the July 13 meeting, before slowing the pace of tightening in the second half of 2022. The Bank is seen stopping around the 3% mark.

The central bank “is prepared to act more forcefully if needed to meet its commitment to achieve the 2% inflation target”, it said in the prepared statement.

“The risk of elevated inflation becoming entrenched has risen,” the officials said, adding that they would use their tools to return inflation to target and keep expectations “well anchored”.

There’s little ambiguity about the key messaging and main points of the bank’s actions. The statement highlighted how inflation is well above target and could go higher before easing, with price pressures broadening. Officials also said the economy is “clearly” operating with excess demand while growth is poised to remain heated.

Policymakers conceded that inflation is rising faster than their April forecasts and “will likely move even higher in the near term before beginning to ease.”

Even with Wednesday’s increase, interest rates remain stimulative. The central bank estimates that its policy rate needs to rise to between 2% to 3% in order for borrowing costs to no longer be inflationary. But its new hawkish comments could fuel a debate whether the central bank may need to increase rates beyond the neutral range and actively slow economic growth in order to contain three-decade-high inflation.

The bank said the housing market is “moderating” from “exceptionally” elevated levels of activity, while noting that consumer spending remains robust.

German inflation jumps to 8.7% in May

Consumer prices jump 8.1% from a year, driven by food and energy  after Russia’s invasion of Ukraine
News
2 months ago

The move, to anchor inflation expectations as concerns about commodity prices build, was unexpected
News
2 months ago

Zimbabwe’s annual inflation rate jumped to a ten-month high of 131.7% in May from 96.4% in April, as food prices almost tripled
News
2 months ago
Next Article

State will stick to fiscal discipline to cover R4.5bn relief at pumps

State will stick to fiscal discipline to cover R4.5bn relief at pumps