With memories of the Arab Spring unrest in the early 2010s in mind, investors are fleeing emerging market nations threatened with crippling food shortages and uprisings 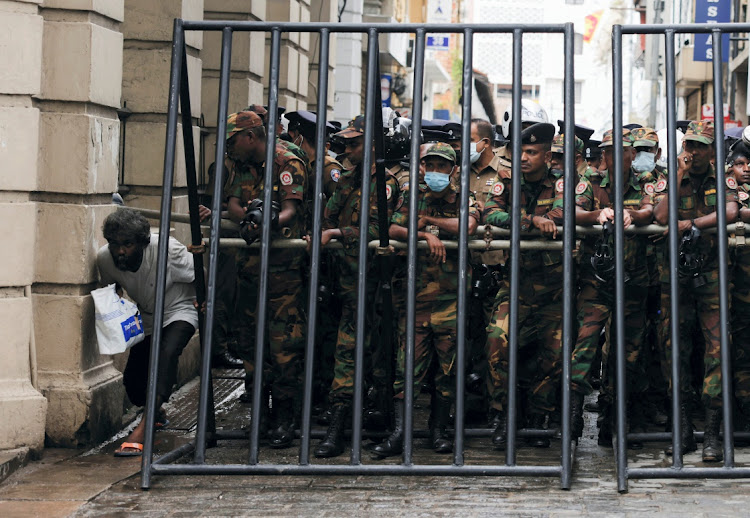 A man creeps through a police barrier during a protest by Medical University students demanding President Gotabaya Rajapaksa step down amid the country's ongoing economic crisis, in Colombo, Sri Lanka, on May 29 2022. Picture: REUTERS/DINUKA LIYANAWATTE

For a swath of the markets he’s tracking, global food shortages are presenting governments with a stark choice — pay their debts or feed their people.

Sri Lanka opted for the latter, falling into arrears on its foreign debt on May 18 amid a lack of dollars to ease shortages of everything from food to fuel, and bets are high that others may follow. Fifteen emerging market nations now trade with debt at distressed levels, or a risk premium of more than 10 percentage points. Four of those nations are in Africa, where one of the steepest run-ups in food prices is taking a toll.

“The default in Sri Lanka made me nervous,” McIntyre said. “You don’t have to drive, heat your home, but you have to eat.”

With memories of the Arab Spring unrest in the early 2010s in mind, investors are fleeing emerging market nations threatened with crippling food shortages and uprisings. Russia’s invasion of Ukraine disrupted vital supplies of food staples, adding to problems caused by extreme temperatures and elusive rain in breadbaskets from the Great Plains to the Horn of Africa.

Indeed, food prices have skyrocketed by more than 30% over the past year, according to a UN measure. That’s all the more striking when you consider that in the two decades through 2020 they rose an average of 4.3% every year.

The countries that are most affected — and least able to cope — are those in the developing world. For these nations, food is almost a third of current year-on-year headline inflation gauges; in the US, UK and much of Europe, food accounts for 10% or less of similar measures.

Desperate measures like India’s move to restrict wheat exports, announced earlier this month, will add to global price pressures, thwarting efforts by central bankers to subdue them. And protests against domestic pain have the potential to spread.

“The markets have firmly underestimated the implications of the rise in input costs,” said Luiz Eduardo Peixoto, emerging markets economist at BNP Paribas Markets. “We are particularly concerned about food inflation. The repercussions of the increase in the cost of food will be seen in the next few months, causing a dramatic increase in global inflation.”

Not that prices haven’t already taken a hit. Debt of developing nations in dollars has lost 15% so far this year while local-currency obligations are down 7%, with both trading near early 2020 levels, according to Bloomberg indexes. The MSCI gauge of emerging-market stocks has lost 14%, trading near the lowest level since 2001 relative to US stocks.

And the more exposed a nation is to food inflation, the more likely it is their currency will weaken, with the Mexican peso, the Colombian peso, the ringgit and rupiah among the most vulnerable. An important inflation report is due out of Mexico this week, with investors also watching for Colombia’s presidential elections, Brazil GDP and China PMI.

That makes servicing debt — particularly dollar debt — even harder, raising the prospect that developing nations lose access to markets at a time they need it most. Yields on their dollar bonds are near the highest in two years at almost 7%, tripling a country like Tunisia’s borrowing costs.

Meanwhile, the cost to protect the debt of speculative-grade emerging market nations has risen to match levels on par with the 2013 taper tantrum, according to Bloomberg Intelligence.

“Compared to energy price shocks, food price inflation tends actually to be more pervasive and prolonged in its impact, and governments typically have fewer administrative programs to buffer the effects on households,” said Bryan Carter, head of emerging-market debt in London at HSBC Asset Management.

His team is cautious on the bond markets of Nigeria, India, Kazakhstan, Egypt and Pakistan due to their large food inflation components and has ratcheted up expectations for emerging-market inflation in most countries.

What’s clear to all is there’s no quick fix — for food shortages or the markets fallout. Even before the Russia-Ukraine conflict disrupted food supplies, networks had been weakened by the lingering effects of pandemic shutdowns, climate change and the energy crisis.

It’s a situation that’s led to hoarding on a global scale, with food-producing nations now stopping some exports and perpetuating a cycle of inflation and hunger.

India, the world’s second-biggest producer of wheat, followed its prohibition on sales of the staple with a limit on sugar exports. Malaysia has halted the overseas sale of poultry. Indonesia is partially stopping shipments of palm oil.

Thailand and Vietnam, the world’s top rice exporters after India, may also take action that could result in higher food costs for consumers worldwide. The two Asian nations should jointly raise prices to boost their bargaining power, according to Thai premier Prayuth Chan-Ocha.

“The next aspect of that food price angle that we’re going to be monitoring very closely is with regards to politics, populism and protectionism,” said Mary-Therese Barton, head of emerging-market debt at Pictet Asset Management in London. “It’s a very difficult period for EM.”

Country is facing a shortage of foreign exchange, fuel and medicines, and economic activity has slowed to a crawl
World
1 month ago

Farmers across the world face rising feed and energy costs, while drought and disease compound their woes
News
1 month ago