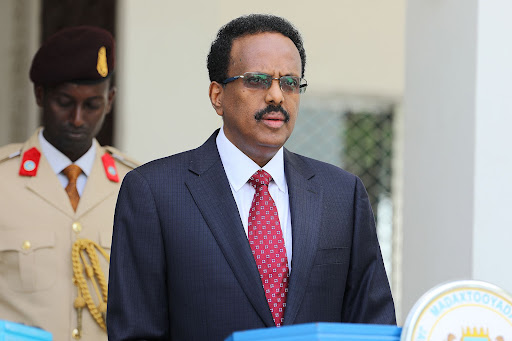 Mohamed Abdullahi Mohamed, Somalia’s outgoing president, acknowledged for the first time that 5,000 of the nation’s soldiers were sent to Eritrea in 2021 to undergo training and said their return was delayed to prevent political upheaval.

The secret recruitment and dispatch of the troops sparked protests in Somalia in 2021, with their family members complaining that they weren’t notified of their whereabouts.

Mohamed, who is widely known as Farmajo and lost his bid for re-election earlier in May, said the soldiers could now return home, integrate into the Somali army and help fight an insurgency being waged by Islamist militant group al-Shabaab.

“We sent the largest contingent of our army to Eritrea for training,” he said at a ceremony that marked the handover of power to his successor Hassan Sheikh Mohamud in the capital, Mogadishu, on Monday. “These forces, which number 5,000, were trained a year ago, but due to political unrest and elections, their return was postponed.”

Eritrea backed the Ethiopian government in its fight against rebels from the northern Tigray province, a conflict that erupted in late 2020. Ethiopian Prime Minister Abiy Ahmed’s administration has denied that Somali soldiers fought alongside federal troops in Tigray.

In 2021, the head of Somalia’s parliamentary committee on foreign affairs asked Mohamed to investigate complaints that some of the nation’s troops went missing while fighting in Ethiopia, and Somalia’s former deputy spy chief subsequently told local broadcaster GoobJoog TV that hundreds of them may have died in clashes there.