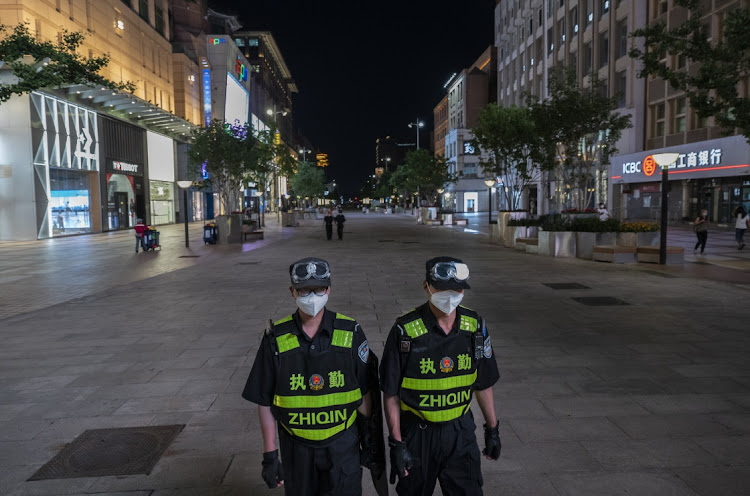 China’s economy is in some respects worse off than in 2020 when the pandemic first emerged, Premier Li Keqiang said on Wednesday, urging efforts to reduce a soaring unemployment rate.

“Economic indicators in China have fallen significantly, and difficulties in some aspects and to a certain extent are greater than when the epidemic hit us severely in 2020,” Li said at an emergency meeting with thousands of representatives from local governments, state-owned companies and financial firms on stabilising the economy. China’s full-year growth in 2020 was 2.2%.

His remarks came after economists surveyed by Bloomberg forecast China’s economy will grow 4.5% in 2022, well below the government’s target of about 5.5%. Beijing’s priority on coronavirus control is raising the prospect that it will admit to missing its GDP target by a large margin for the first time ever this year. It didn’t set a goal in 2020.

The premier called on officials to ensure unemployment falls and the economy “operates in a reasonable range” in the second quarter of 2022, state media cited him as saying. The nation’s surveyed jobless rate climbed to 6.1% in April, the highest since February 2020. Official data for April showed industrial output contracting for the first time since 2020, though the decline was shallower than during China’s lockdowns that year. 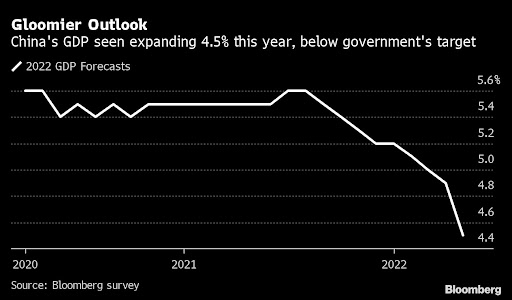 Li’s emphasis on growth in the second quarter may be an “implicit acknowledgment” that the growth target set in early March will be “challenging”, Goldman Sachs economists wrote in a note on the meeting.

“Chinese policymakers are in greater urgency to support the economy after the very weak activity growth in April, anaemic recovery month-to-date in May, and continued increases in unemployment rates,” they said.

The meeting is the latest in a series of calls by Li to shore up growth, which has come under enormous pressure since March from Covid-19 outbreaks and President Xi Jinping’s commitment to zero-Covid, requiring strict restrictions on activity where outbreaks occur. Li stressed implementation of current support policies, adding that economic data for the second quarter would be released “accurately” — amid some suspicion that official data could be massaged to appear less bad.

Li indicated that China will try to reduce the impact of its strict coronavirus control policies on the economy, without giving details on how that would be achieved. “At the same time as controlling the epidemic, we must complete the task of economic development,” he said.

Beijing has never admitted to missing its annual growth target by a large margin since it began setting such goals more than three decades ago, with only one narrow miss previously reported in 1998.

While China’s current economic contraction appears to be shallower than 2020, it may last longer due to the higher infectiousness of the omicron variant of the coronavirus. The slump continued in May, according to high frequency indicators, such as truck flows between cities. In the week through to May 15, a road-freight index produced by Chinese company G7 Connect fell 18% from a year ago, a company executive told local media this week.

G7 added in a social media post on Wednesday that truck flows in Shanghai, which has been under a strict lockdown since March, stood at just 20% of pre-pandemic levels over the past two weeks. Most Chinese freight travels by truck, and economists based at the Chinese University of Hong Kong and other universities have found that truck flows and China’s economic output are highly correlated.

Xi has laid the groundwork for treating the GDP target as just one goal among several for officials to aim at, writing into a key Communist Party document last year that it should no longer be a “sole criterion of success”.

Beijing hasn’t explicitly mentioned the growth target since March. Instead, Li and other officials have repeatedly stressed the importance of employment, which the government can boost by subsidising companies to retain workers keep unemployment below the target of under 5.5% — even if staff can’t perform their usual work tasks due to virus controls.

The nation’s leadership is trying to put a floor under growth especially as repeated lockdowns raise the chance that China’s economy will grow more slowly than the US for the first time since 1976. Economists expect additional stimulus, which could include cash handouts to households and financial support for the tech sector.

“Beijing will try to climb down from the 5.5% target,” said Houze Song, an economist at think-tank MacroPolo. “How Beijing handles the situation in the coming months will matter more than missing the target. If it handles well, it can offset some of the damage.”

Li outlined 33 support measures on Monday to help businesses, including more than 140-billion yuan ($21bn) of additional tax reductions including one for vehicle purchases. Local governments were told to spend most of the proceeds from 3.65-trillion yuan of bonds used mainly for infrastructure by the end of August. Li said more detailed instructions on how to implement those policies would be issued this month.

The central bank and banking regulator also held a meeting with major financial institutions on Monday to urge them to boost loans. State media reported following the meeting that some banks had been handed specific quotas requiring them to accelerate loan growth.

Li met with local authorities in April, when Shanghai was in the middle of a lockdown, telling them to “add a sense of urgency” as they rolled out policy. During a trip to Yunnan province last week, he said they should “act decisively” to support growth.

Despite the lockdown-induced issues being weathered by Tesla’s factory in Shanghai, Musk still predicts China’s economy will overtake the US
News
1 month ago

Those working in the day will have their beds occupied by the night shift while they’re on duty, and vice versa, one source says
News
1 month ago