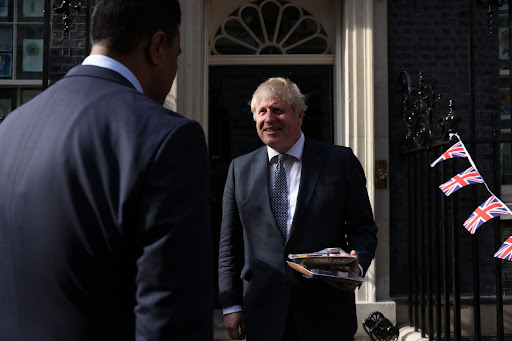 Boris Johnson is readying himself for another dressing-down over illegal parties in Downing Street, amid warnings that the UK’s cost of living crisis is spinning dangerously out of control.

Civil servant Sue Gray is expected to publish her internal investigation into the details of the so-called “partygate” scandal this week, which could include potentially damaging photographs of events.

Johnson has committed to making a statement in parliament to try drawing a line under the matter. But the ongoing focus on lawbreaking in the premier’s offices during the pandemic has proved a major distraction while household bills have soared and consumer confidence has plunged.

Things are only going to get worse, according to Michael Lewis, CEO of E.ON, one of the UK’s biggest energy suppliers. Up to 40% of its customers could be in fuel poverty by October — compared with a fifth now — without substantial action by the government, he told the BBC on Sunday. A household is in fuel poverty when it spends more than 10% of its income on energy bills.

“In my 30 years in the energy industry I’ve never seen prices increasing at this rate,” Lewis told the BBC. He warned that gas and electricity prices could stay high for another 18 months.

Yet Johnson’s government has signalled there is little prospect of imminent extra help for consumers. This month the premier warned that spending taxpayers’ money on reducing bills now meant less investment in bringing down bills in the longer term.

He is under growing pressure to take action, but there appears to be no consensus at the top of government about the right way forward. With less than two years until the next general election, Johnson is eager to paint himself as a prudent guardian of the public purse after the economic shock waves of the Covid-19 pandemic.

Meanwhile the crisis is worsening. Inflation in April hit a 40-year high of 9%, driven by a surge in energy costs. The UK has seen more than two dozen suppliers go under as they face soaring wholesale costs, but are limited in what they can charge due to the price cap. Consumer confidence is also at its lowest in almost five decades — worse than even the grim days of the 1970s.

Alongside that, Britain is becoming a less attractive place to do business, according to a survey of more than 100 major investors and business leaders by the Centre for Policy Studies think-tank. Its report, published on Monday, cited “sharp criticism” of the government for introducing tax rises and failing to “celebrate enterprise and entrepreneurship”.

Discussions are active in government, however, over a potential windfall tax on UK energy company profits — which Johnson has played down in recent days. “We will look at all the options,” education secretary Nadhim Zahawi told Sky News on Sunday, though he warned the levy could hit pensioners by reducing dividends.

Chancellor of the exchequer Rishi Sunak has faced opposition from cabinet colleagues over a windfall tax, with health secretary Sajid Javid and Northern Ireland Secretary Brandon Lewis voicing their opposition at the weekend.

But even as Johnson battles behind the scenes over the right course of action for struggling households, he will be forced this week to answer questions on the issue that has dogged him for months: the “partygate” scandal.

Johnson became the first sitting prime minister found to have broken the law when he was fined by police for a lockdown gathering on his 56th birthday. Now he faces the release of a detailed civil service report, outlining which gatherings took place in Whitehall while the rest of the country was banned from socialising.

The extent to which the report damages Johnson will depend on the level of detail Gray goes into, such as whether she includes names, WhatsApp messages and photographic evidence. It appears unlikely though that the dossier will trigger a Conservative Party rebellion against the premier, after he escaped further punishment from the police last week — despite other officials at the same events receiving fines.

The government has insisted that Gray’s report is independent, despite her role as a senior civil servant.

Zahawi batted away reports that Gray and Johnson had met several weeks ago to discuss it, telling the BBC she had “complete control” over the details she chooses to reveal.