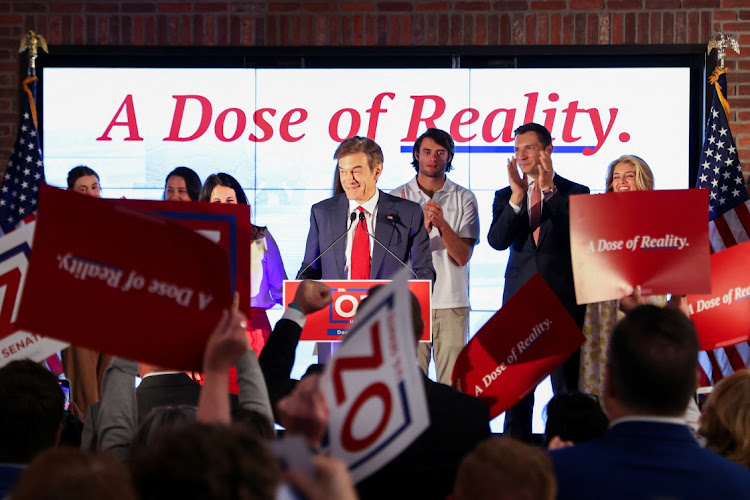 Pennsylvania Republican US Senate candidate Mehmet Oz speaks at his primary election night gathering in Newtown, Pennsylvania, the US, May 17 2022. Picture: HANNAH BEIER/REUTERS

Oz, who was endorsed by former president Donald Trump, had 31.3% of the vote to McCormick’s 31.1%, with 95% of the votes counted, according to the Associated Press. Conservative firebrand Kathy Barnette, who roiled the campaign with a surge in its closing days, lagged with 24.8%.

The count is unfolding slowly in part because state law doesn’t let counties start processing and counting mail-in and absentee ballots until 7am on Election Day, and there were 636,305 ballots returned across the commonwealth at the end of the day on Monday, according to the Pennsylvania department of state.

Also, about 22,000 mail-in ballots in Lancaster County have to be manually marked and rescanned after a printing issue made them unreadable, extending the vote counting process, acting secretary of the commonwealth Leigh Chapman said on CNN on Wednesday. There are about 7,000 Republican ballots being remade in the county, she said.

Pennsylvania law requires an automatic recount in statewide races when the margin is less than or equal to 0.5% of the total vote. Candidates can also request a recount through the courts.

The outcome of the 2020 presidential election in Pennsylvania was delayed for days as counties finished counting a flood of mail-in ballots cast because of the coronavirus pandemic. County officials have pleaded with state legislators to allow them to begin processing mail-in ballots earlier as Florida and other states do, but they have refused.

Trump falsely claimed that mail-in ballots counted after the 2020 election, which reversed a lead he had from the Election Day count, were fraudulent. And he’s started to question the legitimacy of the mail-in balloting in Tuesday’s election if McCormick prevails.

“Dr Oz should declare victory,” Trump said in a posting on his Truth Social platform. “It makes it much harder for them to cheat with the ballots that they ‘just happened to find’.”

Both McCormick and Oz addressed their election night gatherings, acknowledging that there wouldn’t be an immediate conclusion.

“Unfortunately, we’re not going to have resolution tonight, but we can see the path ahead. We can see victory ahead,” McCormick said, adding that “tens of thousands” of mail-in ballots were still to be counted on Wednesday.

Oz made similar comments, saying “we’re not going to have a result tonight. When all the votes are tallied, I am confident we will win.”

Among those Oz thanked were Fox News host Sean Hannity, who endorsed him, and “45, president Trump” for his support and continuing to lean into the race by doing calls and holding a rally for him on May 6 in southwestern Pennsylvania.

“God bless you, sir, for putting so much into this race, I’ll make you proud,” Oz said.

While Republicans are favoured to take over the US House in this year’s midterm elections in part because of soaring inflation and President Joe Biden’s low approval ratings, Democrats have targeted the Pennsylvania seat of retiring Republican senator Pat Toomey to perhaps maintain control of the chamber.

The winner of the Republican primary will face Democratic nominee John Fetterman, the Keystone State’s lieutenant-governor, who easily won his race despite being hospitalised. Fetterman announced on Sunday he was being treated for a stroke and had a pacemaker installed on Tuesday.

The tall, gym shorts-wearing candidate made a brief video appearance from his hospital room at the election night party, where his wife, Gisele, addressed the crowd.

Biden issued a statement lauding Fetterman’s victory, saying: “Democrats are united around John, who is a strong nominee, will run a tough race, and can win in November.”

The Republican Senate primary had been in flux for weeks as polls showed that it had become a three-way heat among Oz, McCormick and Barnette. Barnette also addressed her election night event, saying that the race hadn’t yet been called as she attacked her critics.

Oz and McCormick, with their allies, spent more than $54m on ads — a record for a Senate primary in the commonwealth.

Democrat Josh Shapiro, Pennsylvania’s attorney-general, ran unopposed in the primary. Shapiro announced on Tuesday that he had tested positive for Covid-19.