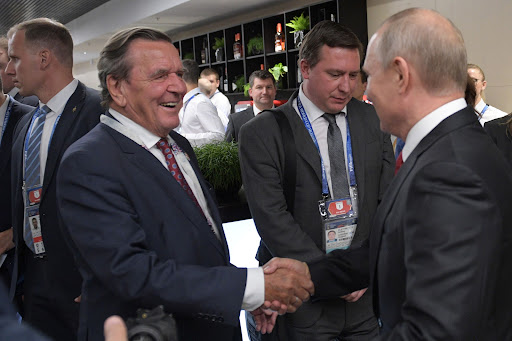 Germany’s ruling coalition is stripping former chancellor Gerhard Schröder of his office in the lower house of parliament over his close ties to Russia and President Vladimir Putin.

Schröder has refused to give up lucrative jobs as chair of both the state-owned Russian oil giant Rosneft and the shareholder committee of Nord Stream, which built a Russia-to-Germany gas pipeline that Chancellor Olaf Scholz halted in February. A Social Democrat like Scholz, Schröder served as chancellor from 1998 to 2005.

Germany’s ruling alliance of the SPD, the Greens and the Free Democrats has agreed to withdraw Schroeder’s right to an office in the Bundestag, the three parties said Wednesday in an emailed statement. They will also link future perks for former chancellors to official duties that they perform after leaving office rather than granting them automatically.

“Gerhard Schröder no longer has any ongoing obligations from his position as a former chancellor,” according to the statement. “This eliminates the reason for personnel and office space.” Schroeder will keep his pension and his security detail, local media reported.

The SPD in April urged Schröder to leave the party and said a process to kick him out was under way. The 78-year-old, who lost to Angela Merkel in the 2005 election, defended Putin over apparent Russian atrocities in Ukraine, saying he didn’t think those orders would have come from the Russian leader.

“Gerhard Schröder’s proximity to Putin damages Germany’s reputation,” Martin Huber, general secretary of the opposition CSU party, said on Twitter. “The taxpayer shouldn’t be paying him for it.”