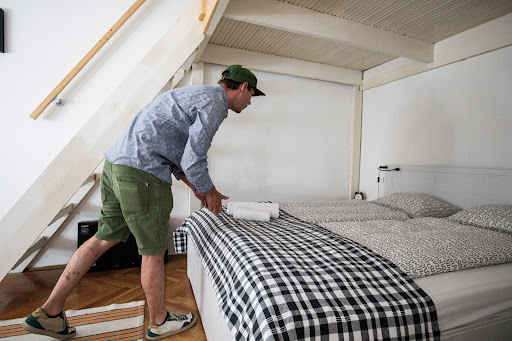 An Airbnb property in the Great Smoky Mountains in the US. Picture: BLOOMBERG/ OLIVIA CARVILLE

Last week Airbnb revealed what it’s calling its “biggest change in a decade”. Beyond modifications to its user interface and nifty new bells and whistles, it’s also addressing one of the company’s greatest pain points: poor consumer protections for guests.

Airbnb will now offer a substantial set of satisfaction guarantees for guests and is staffing up an army of customer service agents to deliver on them. “There are inherent structural advantage to hotels, like product consistency and having a front desk,” explains CEO Brian Chesky over Zoom. “And it’s been an underlying assumption for many years that we really can’t meet hotels in that sense.”

AirCover for Guests is his bid to change that. “We wanted to take some of the uncertainty of Airbnb off the table,” he says, “and make the idea of being one of a kind an asset, not a liability.”

Take the misadventures of San Diego-based Kelsey Swann, who was looking forward to a quiet escape in California’s Sonoma wine country with her children, only to find the timeshare resort she booked on Airbnb was far from that ideal. First, she was given a multiple-hour runaround between three different units which were all either unavailable, unlockable or uncleaned. Then, once finally settled, the karaoke parties started, blaring through paper-thin walls from what seemed like every direction. They checked out the next morning.

We wanted to take some of the uncertainty of Airbnb off the table and make the idea of being one-of-a-kind an asset, not a liability

To add insult to injury, during a days-long battle with customer support to get refunded for three unused nights, Swann had $3,500 fraudulently charged by the same host. Getting those charges reversed, she says, took several days and required extra support from her credit card company.

Amid the drama, she turned to a family travel Facebook group for advice; sympathetic comments poured in by the dozens. “Airbnb is the worst,” one group member told her. “We got nothing because the host disputed everything,” rallied another, who had been in a similar situation. “We loved using Airbnb for years — but it’s back to hotels for us,” another chimed in.

Traditionally, Airbnb will pay out the portion of a booking that a host has earned within 24 hours of check-in. If a guest’s problem hasn’t been resolved by then, the traveller has no real recourse or protection with Airbnb, and the host has little incentive beyond a poor review to make things right.

Hosts, however, have long enjoyed a wide array of insurance-like protections called AirCover for Hosts. There’s $1m in liability insurance and another $1m in damage protection. The plan covers messes left by pets and other deep cleaning costs, too, with generous 14-day filing windows.

The rise of aparthotels

Covid has upended the hospitality sector. While traditional hotel offerings are still suffering, travellers are increasingly turning to extended-stay ...
Features
3 months ago

AirCover for Guests nudges towards parity. It extends the window to file complaints to 72 hours and adds guarantees that customers will be rebooked or refunded when things go wrong — be it inaccurately described listings, pests or broken heaters.

But AirCover for Guests is unique in how it underscores the two-sided marketplace of Airbnb’s business model: satisfying both the hosts who open their homes and the guests who stay in them. And as early response indicates — hosts caught wind of the policy earlier this year — pleasing them both is difficult. While guests should be thrilled with having more time and support when things go wrong, hosts say the same policy hurts them by opening the door to scammers who want a free stay.

The new policy will cover not just problems that arise after check-in, but incidents where a host cancels a stay within 30 days of the reservation, in which cases Airbnb will automatically rebook guests into comparable (or better) homes.

That would have helped Roberta Roy, a Seattle-based mom of three who had her Rome apartment booking cancelled at the last minute “because the previous guest broke the bed”. Trying to find something new on her own with just a few days to spare, she said, cost her twice as much. And calling Airbnb for help was nearly impossible thanks to an impenetrable automated phone system: “I felt like the issue could’ve been very easily addressed by Airbnb, but they were completely unreachable.”

For guests who encounter issues at the scene, getting support will now be as simple as pushing a red “help” button in the “Trips” tab of their app. This begins an official arbitration process, via text thread, with the newly expanded, better-trained community support team.

Assuming the host has already been contacted and was unable to offer an acceptable solution, customer service agents will have access to an automatically generated list of Airbnb properties similar to the existing booking, from which they will be able to immediately rebook the guest at no cost.

Chesky says the directive will be to upgrade a guest when in doubt: “We’d rather you be convinced this is a better home, not a worse home.”

Airbnb will also have “a second line of defence” prepared for big events and high-demand seasons, when inventory can be fully booked out.

“Let’s say it’s Palm Springs during Coachella and all the Airbnbs are booked,” says Chesky. “Our agents will also have queued up properties or hotel rooms that might be off platform.” The idea, he explains, is having more agents being able to respond in more languages, to offer solutions “in minutes or hours rather than days”.

Hosts were tipped off to the policy change earlier in the year and have been discussing it in Facebook hosting groups. Running through the largely negative posts are fears that guests would take advantage of the policy and claim a refund for minor, or in worse cases, fabricated complaints.

Some hosts Bloomberg spoke to in April said they were contemplating creating a website to attract their own bookings, so they wouldn’t have to deal with Airbnb’s policies and rules. Kim D, a superhost who has properties in western New York and Florida, said she worries that a guest could try to take advantage of the new policy and seek a refund for a minor problem. (Bloomberg is not using her last name because she worries Airbnb could remove her listings.)

A guest could stay at her property for three nights and come up with a minor issue for wanting to leave, which could risk Airbnb approving a refund, she said, adding there’s a “grey area” between what hosts, guests and the company view as worthy of reimbursement.

The company views the new policies as breathing room for guests. “We didn’t want to be punitive to hosts, but a lot of guests don’t check out the entire property the first day they arrive and they discover something the second day,” Chesky said of the time frame. “And that’s kind of a ticking time bomb — by day two if you discover anything you can’t call us? So we try to be reasonable.”

A 72-hour window would also give the host and guest more time to address the issue themselves, an Airbnb spokesperson told Bloomberg.

Chesky thinks that for most hosts, the policy should be a net benefit. He says “95% of hosts — maybe 99% — will be happy because they’re doing a great job. And if a host cancels or lists properties that are not as described, it kind of hurts the brand of every host.”

For consumers like Swann, it may be too little too late. “Would I use them again? Maybe,” she says. Roy, however, is encouraged. “We love Airbnb. We have always used Airbnb,” she says. “I’m really glad they’re addressing these issues.”

Municipalities need to add a new category for hotels to property classifications, charging fees that cover their costs but don’t exploit hotels at ...
Opinion
1 month ago

Residential rentals on the rise again

After a mini-boom in the home-buying market, higher interest rates now look likely to buoy residential rentals, with Cape Town taking an early lead
Features
5 months ago
Next Article

Find inner joy: Why this condom can take your sexual pleasure to new heights

Find inner joy: Why this condom can take your sexual pleasure to new heights