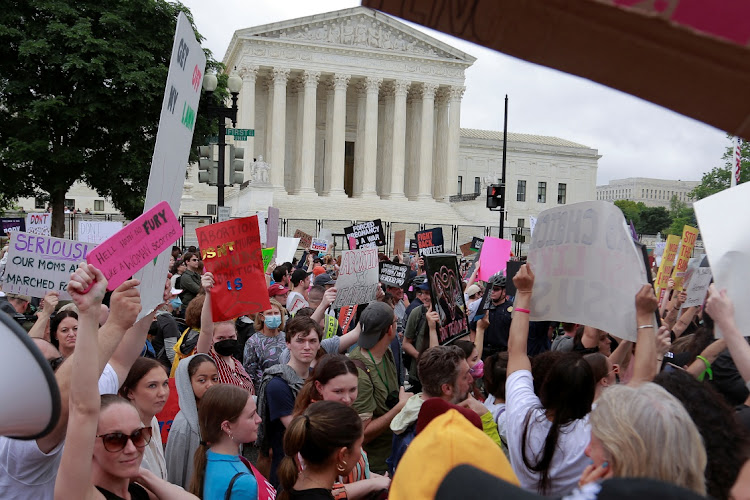 Abortion rights campaigners participate in a demonstration in Washington, the US, May 14 2022. Picture: AMIRA KARAOUD/REUTERS

The bombshell leak of a US Supreme Court draft ruling overturning the right to abortion has put the issue in the forefront of the coming US election battle, and will likely reverberate around boardrooms across the nation as well.

The decision draft would see the half-century-old Roe vs Wade ruling axed, allowing individual states to decide on their own abortion restrictions. When Texas banned procedures after the six-week mark in 2021, some companies in the state condemned the move, arguing that it would deter top talent, and offering assistance to workers seeking abortions.

According to the Guttmacher Institute, which researches sexual and reproductive health and rights globally, 26 states are “certain or likely” to ban abortion if Roe vs Wade is overturned, which will force many people across the country to travel lengthy distances for treatment.

That may put further pressure on companies to find ways for their employees to receive the reproductive care services they’ve been entitled to for half a century.

Here’s how some of the US’s biggest corporates are currently helping workers:

Amalgamated Bank: The Amalgamated Financial-owned bank on May 3 announced a new initiative in which it would reimburse employees and dependants for travel-related costs should they need to leave their home state for reproductive healthcare, as well as up to five days of childcare expenses incurred during the travel time. In a statement, CEO Priscilla Sims Brown said the policy would help employees “make personal and confidential decisions”.

Amazon: Amazon on May 2 told employees in the US that it would cover up to $4,000 in travel expenses related to medical procedures including abortion services. The policy is retroactive to January 1 for employees and their dependants covered by two company-offered health plans, Reuters reported, and covers services rendered if care is not possible to be offered virtually or available within 160km of an employee’s home. Such a distance is typically referred to as an abortion desert; as of 2017, there were 27 cities with populations over 100,000 that qualified for such a title.

Apple: The company has said it will cover the cost of abortions and travel for treatment for its retail workers.

Citigroup: The New-York-based bank, which is headed by its first female CEO, Jane Fraser, and has about 8,500 employees in Texas alone, pledged to cover travel costs for employees seeking abortions. A source said the costs covered could include airfares and lodging if necessary.

GoDaddy: The web hosting company last year gave the group Texas Right to Life 24 hours to find a new provider, after the anti-abortion rights group set up a website encouraging people to send anonymous tips about alleged violations of the state’s laws. GoDaddy said the group had breached the terms of service.

Gucci: The Kering-owned fashion house said in a statement that it would reimburse travel expenses for US employees “who need access to healthcare not available in their home state”. The statement also said that the company “remains steadfast in its belief that access to reproductive healthcare is a fundamental human right”.

Hewlett Packard: In a statement to the Los Angeles Times, the company said its employee health plan covers some abortion-related costs, including care and some lodging should employees need to travel out of state.

Levi Strauss & Co: The jeans-maker said any employee who opts into their healthcare plans will be eligible for reimbursement of travel costs for abortions, including part-time workers.

Lyft and Uber: Describing the Texas abortion law as an “attack on women’s access to healthcare”, Lyft CEO Logan Green said last week that the ride-hailing company is working with health providers to cover the cost of rides for women in Texas and Oklahoma — which outlawed abortion in April — who seek out of state care. Both Lyft and Uber have also pledged to pay legal fees for any of their drivers sued under anti-abortion laws for helping women seek out the procedure.

Match: The Dallas-based parent company of dating apps including Tinder and OkCupid, set up a fund to support staff after Texas’s near-total abortion ban came into effect in late 2021. CEO Shar Dubey described the ban as “so regressive to the cause of women’s rights that I felt compelled to speak publicly about my personal views”. The fund aims to cover the costs for employees and dependents who need to seek care outside Texas. Rival dating app Bumble has set up a similar fund.

Microsoft: The technology company on May 9 said that it would expand its healthcare reimbursement programme to include travel if an employee could not access healthcare because it was not available nearby. The company said the move would “support employees and their enrolled dependents in accessing critical healthcare — which already includes services like abortion and gender-affirming care — regardless of where they live across the US”.

Salesforce: CEO Marc Benioff told employees in September that the company would help any employees living in Texas to relocate out of the state if they wished to move in response to strict abortion laws.

Starbucks: The company on May 16 said that it would reimburse travel expenses for employees and their dependants should they need to travel more than 160km to receive an abortion or access gender-affirming care.  A date for implementation was not immediately noted; the memo from Partner Resources executive-vice president Sara Kelly said it would be “coming soon”.

“Regardless of what the supreme court ends up deciding, we will always ensure our partners have access to quality healthcare,” Kelly said in a statement.

Tesla: The carmaker in its 2021 global impact report said its expanded healthcare policies included covering travel and hotel costs for employees who had to travel out-of-state for healthcare. The company is based in Texas, where accessing abortion is increasingly tenuous.

WPP: The advertising company expanded its employee benefits to cover travel for US-based employees’ healthcare needs including abortion, per an internal memo. “We don’t know the full details or impact of these potential changes in reproductive rights yet, but we do know we want our people to have the same health coverage regardless of where they live,” CEO Mark Read wrote.

Yelp: With more than 4,000 workers in the US, Yelp will next month roll out a new travel benefit which “allows our US employees and their dependents to have equitable access to reproductive care, regardless of where they live”. A person familiar with the matter said the benefit, announced before the draft ruling was leaked, would be offered through the company’s insurance provider.