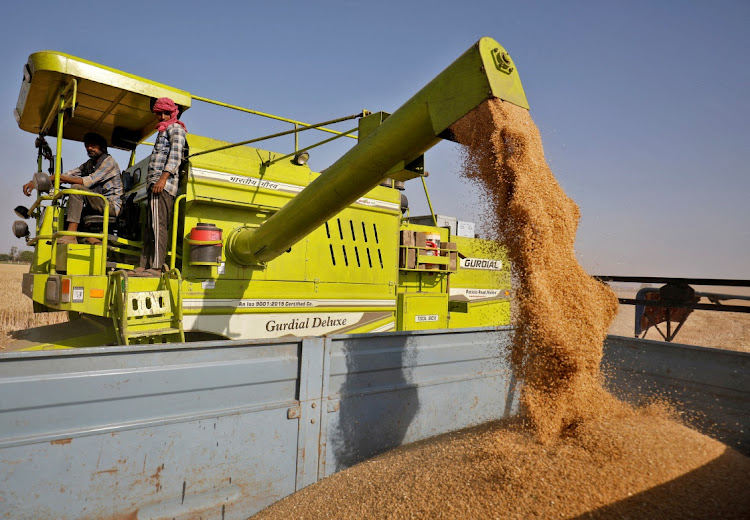 A farmer transfers harvested wheat to a transport truck at a field on the outskirts of Ahmedabad, India, March 16 2022. Picture: AMIT DAVE/REUTERS

India’s move to restrict wheat exports is set to reverberate through global agricultural markets, exposing just how tight global supplies are as a result of the war in Ukraine and threatening to drive up food prices even more.

The Indian government said in a notification dated May 13 that it will suspend overseas sales to manage its food security. This drew criticism from the agriculture ministers of the Group of Seven nations, who said that such measures make the world’s crisis worse.

The surprising thing is that India is not even a prominent exporter on the world stage. The fact that it could have such a major impact underscores the bleak prospect for global wheat supplies. War has crippled Ukraine’s exports, and now droughts, floods and heatwaves threaten crops in most major producers.

“If this ban occurred in a normal year the impact would be minimal, but the loss of Ukraine volumes exacerbate the issues,” said Andrew Whitelaw, a grains analyst at Melbourne-based Thomas Elder Markets. 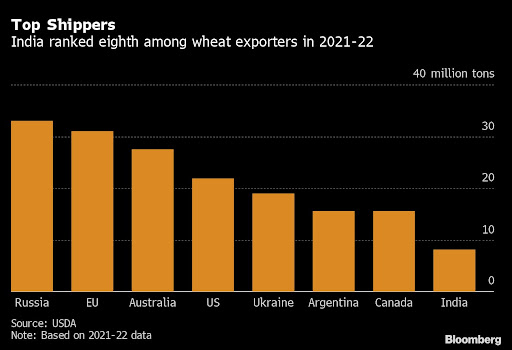 India’s decision to halt wheat exports came as a record-breaking heatwave parched the crop during a crucial period, spurring estimates of slumping yields. The output risk created a dilemma for India, which has tried to fill the gap as the shortfall in Ukraine’s exports push buyers towards alternative suppliers.

India prioritised the domestic market, even as the move risks tarnishing its international image as a reliable supplier. Prime Minister Narendra Modi faces frustration on home soil about surging inflation, an issue that brought down the previous government and paved the way for his ascension to power.

India will approve exports to countries that require wheat for food security needs and based on the requests of their governments. It will also allow shipments for which irrevocable letters of credit have already been issued. Indian wheat usually goes to Bangladesh, Sri Lanka, the United Arab Emirates and Indonesia.

“Directing the wheat exports through government channels would not only ensure fulfilling the genuine needs of our neighbours and food-deficit countries, but also control inflationary expectations,” India’s food ministry said in a statement. It added that the country has adequate food stocks.

Traders are frustrated by the policy. A day before the export halt was announced, the government said it was sending trade delegations to countries in Africa, Asia and the Middle East to explore the possibility of boosting wheat exports. The food ministry had also said it saw no need to control exports as Bloomberg News reported that authorities were considering the move.

“A lot of exporters and actual users worldwide have commitments of purchase of Indian wheat, which should be honoured,” said Vijay Iyengar, chair and MD of Singapore-based Agrocorp International, which trades about 12-million tonnes of grain annually.

The ban could spark frenzied trading when agricultural markets reopen today. Benchmark wheat prices in Chicago jumped 6.2% in the latest week while Paris wheat futures surged to an all-time high on concern that extreme weather is pressuring the global harvest. India’s ban will add to supply risks.

Rice, manioc flour and sorghum are some of the substitutes being used
News
1 month ago
Next Article