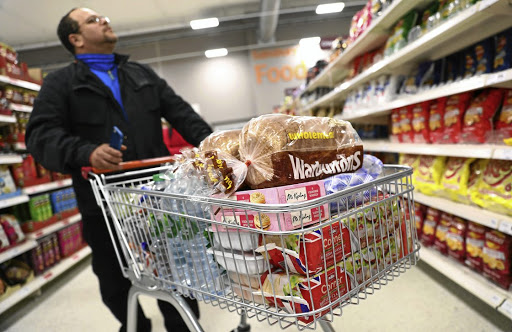 A shopper in a supermarket in London, Britain. Picture: REUTERS

The decades-long era of cheap food in Britain may be coming to an abrupt end.

With the UK wilting under the fastest inflation in three decades, supermarkets are raising prices at an even quicker rate, according to a new analysis prepared for Bloomberg. That’s turning the screws on shoppers who are already grappling with higher gas and heating bills and falling real incomes.

“In terms of prices, the only way is up,” said Honor Strachan, principal food and grocery analyst at GlobalData, a research and consulting firm in London. “It’s something that we will have to get used to.”

A mix of cut-throat competition and innovation helped keep UK prices among the cheapest globally for decades, with the average share of household spending on food in Britain well below its European neighbours. Now a confluence of events, from Brexit to the pandemic and the war in Ukraine, is limiting supplies of everything from sunflower oil to wheat to the fertiliser needed to grow crops.

A basket of staples ranging from instant coffee to baked beans climbed more than 13% in price over the past year at Britain’s four largest supermarkets, according to retail research firm Assosia. A box of penne pasta led the way among the 18 items tracked, surging almost 50%. The most recent reading on the consumer price index, for March, shows inflation of 7%.

There’s no sign those price pressures will ease any time soon. The Bank of England last week forecast the inflation rate will top 10% later this year, the highest level since the 1980s, and warned of the risk of recession.

None of that is good news for over-stretched consumers, or for grocers. Most supermarket chains have seen sales start to retreat as the pandemic wanes and now have to weigh efforts to pass higher costs on to shoppers against the risk of losing them to rivals.

Discounters Lidl and Aldi are the only grocers in the UK that saw sales increase in the three months through April 17, while both Tesco and J Sainsbury — the country’s largest supermarkets — recently warned inflation is squeezing their profits. McColl’s Retail Group, which operates 1,160 convenience stores, was acquired by Wm Morrison Supermarkets this week after collapsing into insolvency.

The industry’s murky outlook is reflected in the credit market, where investors are keeping their distance from some supermarket debt. Among the three worst performers on Bloomberg’s index of high-yield sterling debt are bonds from Co-Operative Group., which saw a 16% drop in price so far this year, more than double the index’s average. Bonds of Asda, a former Walmart unit recently sold to private equity buyers, as well as Iceland Foods and online retailer Ocado are also among the poorest performers.

Thanks to a hyper-competitive marketplace, where about 10 major chains vie for customers, British supermarkets have for years set a global benchmark for innovation. They were early adopters of online delivery, ready-to-eat meals and inventive store formats. Now the industry is a test case for high-speed delivery platforms such as Gorillas Technologies and Gopuff, getting groceries to consumers in as little as 10 minutes.

But while innovation has helped keep prices low in the past, it may not be enough this time, especially as grocers — which include some of the UK’s biggest employers — wrestle with wage inflation. Asda pushed through an increase for its employees last month after Tesco and Sainsbury boosted salaries weeks earlier.

“As the costs continue to pile on, retailers will not be able to absorb everything,” said Helen Dickinson, CEO of the British Retail Consortium. “Customers will inevitably face even higher prices in the future.”

Both were leveraged buyouts — where the buyer loads the target company with debt to pay for the acquisition — leaving both Morrison and Asda weighed down with borrowings and razor-thin margins.

Still, the supermarket giants will be loath to lose more market share to discounters, which could temper price increases and bring them down quickly once inflation peaks and subsides. Budget retailers such as Poundland, B&M European Value Retail and Home Bargains are selling more food, while Aldi and Lidl now account for more than 15% of the UK market, up from 5.5% a decade ago.

“I don’t think food prices will drop all the way back down to where they were because some of these shifts are structural, but the levels of inflation we’re seeing will peak,” said Richard Walker, MD of Iceland Foods. “There is definitely an argument to say systemically food has been too cheap for too long.”

The supermarket chain still sells lasagne for one pound, the same price as 25 years ago, he said.

Mark Price, a former MD at Waitrose, said that while inflation could provide an opportunity for grocers to keep prices higher and boost profitability, “ultimately, the competition with the discounters is so open and strong that the retailers may have no other option but to cut prices again.”

But at least for now consumers are having to face up to costlier groceries in the UK, where on average less than 12% of household spending goes to food, compared with about 15% in France and 17% in Italy, figures from Eurostat and the UK’s Office for National Statistics show.

That higher cost burden is already proving hard to bear for some, especially as energy and fuel bills soar. Citizens Advice, a UK charity, said it referred almost 25,000 people to food banks or other support in March, up 44% from a year earlier, while the debt charity StepChange said the number of clients citing the cost of living as a reason for their problem debt has more than doubled since the end of 2021.

Tesco chair John Allan told the BBC this week that Britain is seeing “real food poverty” for the first time in a generation. “There’s no doubt at all people who have never had to go to a food bank are now having to do so.”

Brace for a bumpy rates ride

The Ukraine crisis has increased the cost of grain, meaning prices of SA's most affordable protein could rise
Companies
1 week ago
Next Article