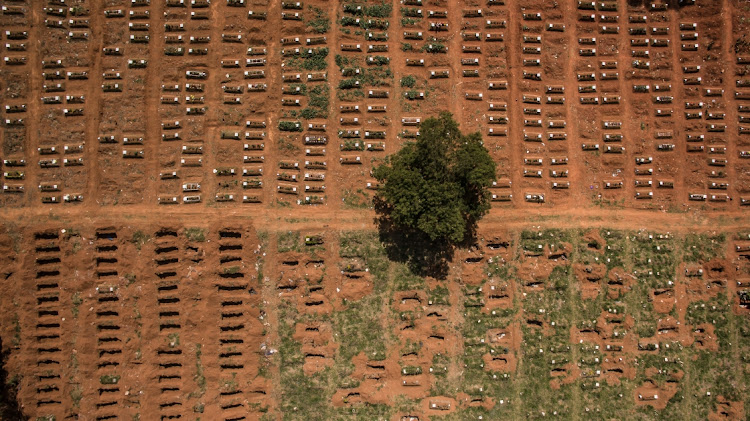 Graves are prepared at the Vila Formosa cemetery in this aerial photograph taken above Sao Paulo, Brazil. Picture: BLOOMBERG/JONNE RORIZ

President Joe Biden and fellow world leaders called for a new push to quell the Covid-19 pandemic abroad, as the US and Europe marked grim milestones and American legislators balk at fresh funding.

The Biden administration opened its second summit aimed at bringing the coronavirus to heel on Thursday, where leaders acknowledged Covid-19 deaths surpassing 1-million in the US and 2-million in the EU.

Biden and other leaders called for new funding donations to fight the virus, along with fresh efforts to boost vaccinations and prepare for the next pandemic.

“There’s still so much left to do; this pandemic isn’t over,” Biden said in a speech that was, like those of many of the leaders, pre-recorded. “Today, we’re at a new stage in fighting this pandemic, facing an evolving set of challenges. We have to double down on our efforts to get shots in people’s arms, country by country, community by community.”

Biden renewed a call for the US Congress to approve a new round of funding for vaccines, tests and treatments for domestic use and for the global vaccination campaign, including by paying to speed up administration of shots that are piling up, unused. Republicans have so far opposed new funding.

“Yes, we have made remarkable progress. Yet, without continued action, lives and livelihoods will continue to be at risk,” vice-president Kamala Harris said in remarks to the summit.

The summit garnered a total of $3bn (R48bn) in new pledges, the US said, as the world sits at a crossroads in its Covid-19 response. At the first summit eight months ago, vaccine supply was a question that prompted Biden to announce a major new donation.

Biden has pledged that the US will donate 1.2-billion vaccine doses worldwide, but so far less than half of that has been shipped, as countries turn away donations and say they don’t need more shots.

Some vaccine manufacturers are idling production as they sit on huge accumulated inventories. And wide disparities remain, as the world will fall short of a goal of vaccinating 70% of people in each country, with low-income countries particularly far behind.

“The pandemic is not over anywhere until it’s over everywhere,” World Health Organization director Tedros Adhanom Ghebreyesus said. Cases are rising in 70 countries as testing plummets, he said, “making us blind to the evolution of the virus.”

Africa in particular continues to have low vaccination rates. South African President Cyril Ramaphosa warned that the continent should target its purchases to African manufacturers, to support a market and avoid being caught without production capacity.

“The global heath recovery will not be inclusive so long as millions of people in developing economy countries remain unvaccinated,” Ramaphosa said.

A new pandemic preparedness fund will be established at the World Bank this summer, and the US raised its pledge Thursday to $450m. Other countries announced a range of financial pledges, vaccine donations and vaccination targets.

“What is needed? The short answer is money,” German Chancellor Olaf Scholz said.

The US also announced that the National Institutes of Health would license certain technologies and research tools broadly through the WHO , making them available to researchers and manufacturers abroad.

“We know that supplying Covid-19 vaccine isn’t enough,” Linda Thomas-Greenfield, the US ambassador to the UN , said at the summit. “We also need to accelerate vaccine uptake and ensure vaccines make it into arms, quickly and equitably. That means tackling difficult cold-chain supply issues, addressing vaccine hesitancy and expanding distribution support.”

Macky Sall, president of Senegal, urged the summit to focus on easing doubts about the vaccines. “We have to come up with new strategies to have vaccines be accepted,” he said.

The world must focus on testing, as well as maintaining vaccine supply and building inroads to get shots to more people and new places, said Gayle Smith, a former state department official involved in vaccination efforts abroad. She’s now the CEO of the ONE Campaign, an antipoverty group.

Where “the wealthy countries and the highly vaccinated countries have gone is to take a decision to live with the virus,” she said in an interview before the session began Thursday.

Developing countries do not enjoy the same luxury without support, Smith said.

“To live with the virus, we’ve got to have certain tools,” she added. “I’m hoping the summit will reinvigorate some of the momentum”

A deal early last month on a $10bn coronavirus package ran aground in Congress after Republicans demanded an amendment vote barring Biden from lifting restrictions on migration across the southern US border. The proposal had shrunk to $10bn after all funding for foreign vaccination efforts was stripped out.

Biden last week agreed to a demand by Senate Minority Leader Mitch McConnell to separate the virus measure from a Ukraine assistance bill. It’s not clear if, or when, Congress will authorise new spending domestically or internationally.

US Covid study shows Omicron is as severe as previous variants,

But the scientists say their study could have some limitations, including possibly underestimating the number of vaccinated patients in more recent ...
World
3 weeks ago
Next Article