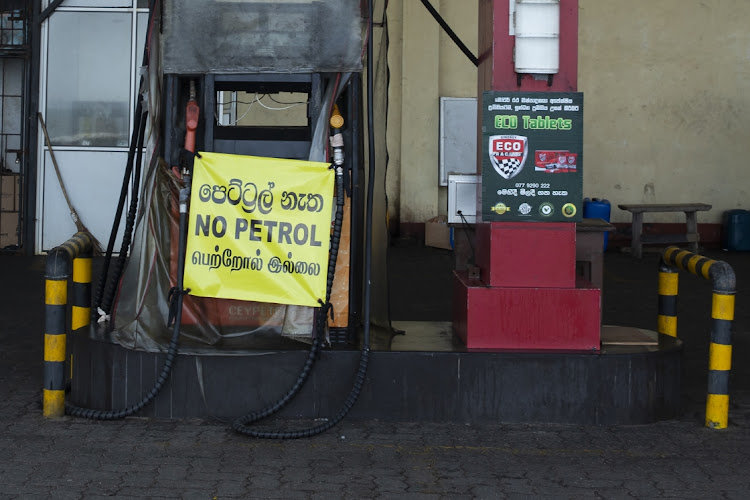 A no petrol sign at a gas station after a nationwide curfew was lifted for a few hours in Colombo, Sri Lanka, on May 12 2022. Picture: BLOOMBERG/BUDDHIKA WEERASINGHE

Promises to restore stability in Sri Lanka are falling flat for investors who sent the value of the nation’s dollar bonds plummeting to fresh lows.

The country’s debt due in 2029 slumped 4 US cents on Wednesday to be quoted at 37c on the US dollar, the lowest on record, according to indicative pricing data compiled by Bloomberg. Most other Sri Lankan dollar bonds also dipped further into distress after Mahinda Rajapaksa’s resignation as prime minister did little to quell uncertainty.

That’s left bondholders to question whether President Gotabaya Rajapaksa will name a new prime minister and cabinet this week in a bid to end political instability in the country, secure a bailout from the International Monetary Fund (IMF) and address its debt troubles. Sri Lanka missed coupon payments in April, which have a 30-day grace period. S&P Global Ratings already downgraded the nation to selective default.

“We want to see a government that can stay in power,” said Jeff Grills, head of emerging markets debt at Aegon USA Investment Management in Chicago. “Otherwise you can’t restructure.”

Lengthy power cuts and shortages of fuel and food have fuelled turmoil in the South Asian economy, including violence that led to the death of at least eight people.

Technical level discussions between the country and the IMF continue, Masahiro Nozaki, the fund’s mission chief for Sri Lanka, said in a statement on May 10. It’s not clear if there are still negotiations starting this week as planned.

“Without more clarity on who will hold the finance portfolio in the coming months, and without a stable government to negotiate with creditors and implement the necessary reforms, IMF talks will likely struggle to gain traction,” said Patrick Curran, an economist at research firm Tellimer wrote in a note.

The extra yield investors demand to hold Sri Lankan dollar bonds widened by 94 basis points to 35.09 percentage points on Wednesday, according to JPMorgan Chase data, well above the threshold for distress.