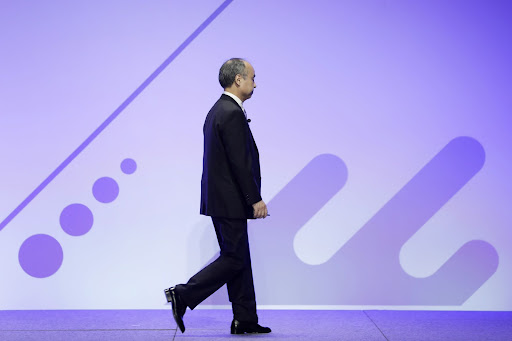 Masayoshi Son is paying a high price for his outsized wagers on money-losing technology companies.

Son’s SoftBank Group reported a record annual loss at its Vision Fund unit as a sell-off in tech shares pummelled the value of its portfolio companies, including public holdings such as Coupang, Uber Technologies and Didi Global. The Vision Fund swung to a loss of 2.64-trillion yen ($20.5bn) for the year ended March 31, compared with a 4.03-trillion yen profit in the previous year.

The world’s largest tech fund has been grappling with pandemic-driven writedowns and a market rout that hammered the valuations of public and private tech companies. SoftBank’s own stock fell 8% on Thursday before earnings, bringing the year-to-date decline to 17%.

While Son has a reputation for making aggressive and unpredictable strategic moves, he spent most of a 90-minute press conference reassuring investors that he knows how to weather difficult times. He began with slide entitled “Concerns about SoftBank?” and then addressed questions about his debt load, the decline in his equity holdings and his cash position.

“In terms of personality, I do like to play offence,” said Son. But with the “pandemonium” of Covid-19 and war in Ukraine, he understands now is the time to play defence. “When it rains, you open an umbrella,” he said.

Son said SoftBank’s “safe driving” in recent months has solidified its financial position. He explained in a slide that the company has allocated 2.9-trillion yen of cash, or roughly twice the 1.3-trillion yen due for bond redemptions in fiscal 2022 and 2023.

The Vision Fund unit has also dramatically scaled back its investments, doling out just $2.5bn in the January-to-March quarter. That’s down from $10.4bn a quarter earlier and far below the peak of $33.3bn in one quarter in fiscal 2018.

Son argued that SoftBank is less vulnerable to unpredictable hits now that it has been in the past. Its loan-to-value ratio fell to 20.4%, comfortably below to 25% target he thinks of as the maximum.

SoftBank’s net asset value (NAV) — another key metric for Son — dropped to 18.5-trillion yen, far below its peak. But SoftBank is less vulnerable to the Chinese government’s crackdown on its tech sector, with Alibaba — his most valuable holding — accounting for 22% of its NAV compared with 59% before.

Son is taking a personal hit of about $2.4bn from his decision to get into trading public stocks. SoftBank set up a controversial side venture in 2020 called SB Northstar, which was aimed at using the company’s excess cash to make some money picking stocks. Son took a personal 33% interest in the unit, while the company held the rest of the equity.

With tech stocks crashing in the last quarter, Northstar got hammered. SoftBank said it would recognise a loss of 670-billion yen for the last fiscal year, while Son is on the hook for 315-billion yen.

SoftBank’s portfolio is full of money-losing tech companies that traded at sky-high valuations during the years of easy money. Blockbuster listings by firms such as South Korean e-commerce giant Coupang, China ride-hailing pioneer Didi and Chinese online property platform KE Holdings have gone from being the main driver of profit growth, to biggest drags.

“People thought Son could make good investment decisions,” said Mio Kato, an analyst at LightStream Research who publishes on SmartKarma. “Now there is less evidence that SoftBank management’s investment decisions are good. Wirecard and WeWork are among the examples. When the environment changes, they are no longer effective.”

A year ago, SoftBank set a record for highest quarterly profit in Japanese history and the company made a full-year profit of 5-trillion yen. In 2022, with the Vision Fund losses, SoftBank Group had an annual net loss of 1.71-trillion yen.

Son shifted his tone near the end of the press conference, however, and began to talk about the opportunities to play offence. He expressed bullishness about the prospects for Arm, the chip designer that is preparing for an initial public offering. He detailed how the business is growing and said the company may well become the most valuable asset in its portfolio.

Son pointed out that the path to an IPO has been cleared by the removal of the rogue CEO of Arm’s China business, a controversy that has lingered for two years after the board fired the executive and he refused to leave. Pressed about the precise timing for Arm’s IPO, Son pointed out that markets are now tumultuous and demurred to give specifics because his lawyers would object.

“We will thoroughly protect ourselves while playing offence,” Son said.

TIM CULPAN: SoftBank’s failure to sell Arm is costly but may not be its biggest ...

TIM CULPAN: SoftBank’s failure to sell Arm is costly but may not be its biggest ...