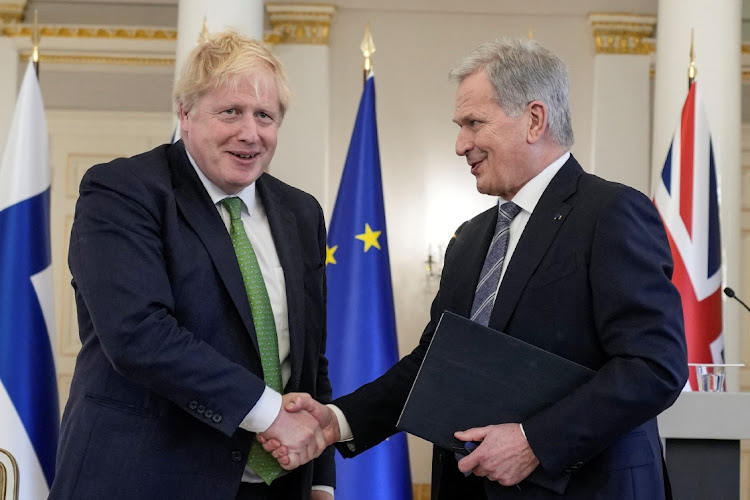 British Prime Minister Boris Johnson and Finnish President Sauli Niinisto shake hands after signing a declaration between the UK and Finland to deepen their defence and security co-operation, at the Presidential Palace in Helsinki, Finland, May 11 2022. Picture: FRANK AUGSTEIN/REUTERS

Sweden and Finland are winning more pledges of help in case Russia attacks them as the Nordic nations are on the path to becoming members of the Nato defence bloc.

UK Prime Minister Boris Johnson signed security agreements with both Sweden and Finland on Wednesday, as the pair is moving closer to filing Nato membership applications.

The deals, in which the countries promise to assist one another if attacked, come after similar assurances from the US and Germany about support in an insecure period between applying for Nato entry and unlocking its collective security guarantees by gaining full membership. Russia has repeatedly warned Finland and Sweden with military consequences, if they join Nato.

“This is important whatever security policy choice we will make,” Sweden’s Prime Minister Magdalena Andersson said at a joint press conference with Johnson in Harpsund, southwest of Stockholm. “We are exploring all possible options and Nato is one of them that are on the table, and during this process we have therefore had discussions with several countries on how they see this ‘grey period’.” 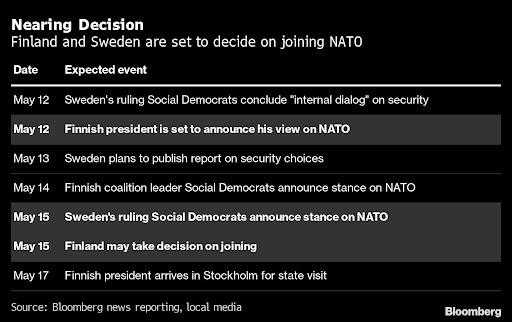 The two Nordic countries began to seriously consider joining the alliance after Russia’s invasion of Ukraine, and are expected to make a decision to file applications in coming days.

Johnson appeared reluctant to detail what the UK would send in the event Sweden is attacked, and said it would depend on Sweden’s request.

“What we’re saying today is that upon request from the other party, we would come to the other party’s assistance,” Johnson said. “It’s vital to state that, ever more important to state that now, in the grim circumstances in which we find ourselves with the Russian attack on Ukraine.”

Still, the security agreements with Sweden and Finland are part of Johnson’s efforts to put the UK at the centre of the international response to the crisis in Ukraine and Russian aggression. That matters even more for the UK after Brexit, and with tensions running high between his government and the EU.

The premier also made clear the UK’s “unwavering support” for Nato to welcome new members, according to a statement from the UK government.

“These are not a short-term stopgap, but a long-term commitment to bolster military ties and global stability, and fortify Europe’s defences for generations to come,” Johnson said in Sweden. Later in Helsinki he added: “We make these commitments to our friends in Finland not because we can make them — and we certainly can — but because we must.”

Military co-operation between the UK and northern European countries has centred on the Joint Expeditionary Force, a framework of defence co-operation encompassing 10 countries —  the Nordics, the Baltics, the Netherlands and the UK.

Still, the agreement signed on Wednesday for the first time puts pen on paper on security between the countries, Finnish President Sauli Niinisto said.

“These decisions, they strengthen our own security here in Finland, and that of Europe, and that of the whole Nato world, especially if we join,” Niinisto told reporters in Helsinki.

The war has taken on a life of its own and is now a conundrum for many countries, writes Ismail Lagardien
Opinion
1 week ago