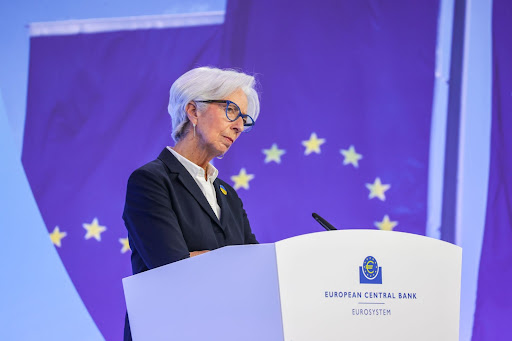 “The first rate hike, informed by the ECB’s forward guidance on the interest rates, will take place some time after the end of net asset purchases,” Lagarde said on Wednesday.

“We have not yet precisely defined the notion of ‘some time,’ but I have been very clear that this could mean a period of only a few weeks,” she said in a speech in Ljubljana, Slovenia, advocating a “gradual” normalisation of monetary policy after the initial increase.

Faced with record inflation that’s almost four times the ECB’s 2% goal, Lagarde’s ECB colleagues are increasingly pushing publicly for a hike at the July 20-21 meeting. While the Federal Reserve and the Bank of England are well under way with policy tightening, the ECB hasn’t raised borrowing costs since 2011. Its deposit rate has been negative since 2014.

Despite the war in Ukraine raising the spectre of stagflation in Europe, money markets are fully pricing quarter-point increases from the ECB in its July and September decisions, with a further hike by year-end. Traders are betting the deposit rate will peak at 1.5% in about two years’ time.

Bundesbank chief Joachim Nagel backed a “timely” hike after net bond buying concludes — probably in June — saying the move “could be in July”. France’s Francois Villeroy de Galhau said he expects rates to be increased gradually “from the summer onwards”.

Few caution against an early-summer move — though one is executive board member Fabio Panetta. In an interview last week with Italy’s La Stampa newspaper, he warned that the eurozone economy is “de facto stagnating” and said he favoured awaiting second-quarter GDP data before deciding on rates.

Adding to the sense of concern, German finance minister Christian Lindner said on Wednesday that “we mustn’t underestimate the danger of stagflation”. The Bundesbank predicts German inflation will come in close to 7% in 2022.

It’s prices that are driving policy, and as the timetable for lift-off crystallises debate will probably switch to how high borrowing costs will rise.

Latest report underscores the breadth of price increases and suggests high inflation will persist for some time.
News
1 week ago

A combination of factors has resulted in a dismal first four months, chief among them the policy change at the Federal Reserve
Markets
1 week ago

The Fed, among other central banks, has made a U-turn on policy
Opinion
2 weeks ago
Next Article