Avoid eateries with great views, says man who has visited all countries — and space 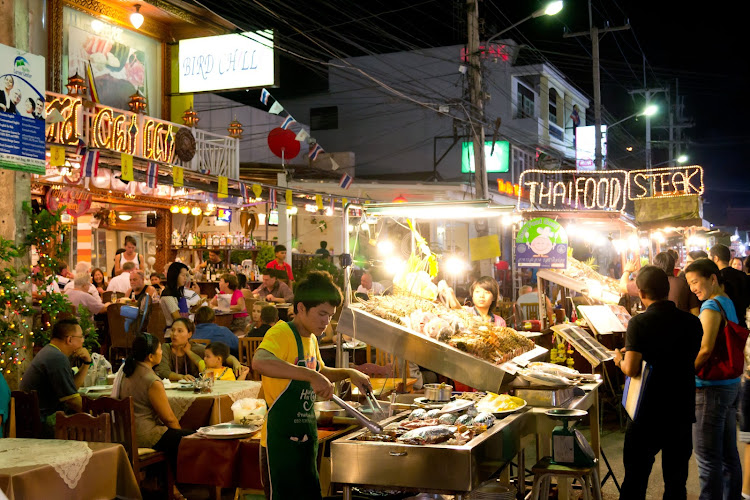 If you want to avoid getting sick, it's best not to have street food. Picture: 123RF/OATMAX

Jim Kitchen knows travel. The 57-year-old entrepreneur says he’s the only person on Earth to have visited all 193 UN-recognised countries, logging about 16-million kilometres in the air, as well as space — he was part of the civilian crew on Blue Origin’s rocket. Here are a few of his travel hacks.

In my 30-plus years of travelling, I’ve experienced that restaurants offering spectacular views of the city or sunsets often have terrible food. I have found this notoriously true in the Caribbean: Pier One in the Bahamas, for example. There’s this gorgeous, long pier with a restaurant built on top of the pier, and the views were spectacular, a million dollars, and the food was just awful. You were happy to feed it to the sharks — it was that bad.

Why you should keep — and customise — a spare credit card.

I always put one credit card in the bottom of a pair of tennis shoes, so that if all hell breaks loose — like I’m robbed and everything’s taken — if they don’t take my shoes, I’m probably OK, because at least I’ll have a credit card to buy a ticket or to get something.

On a long trip, the one thing he won’t leave home without.

Some people don’t care. They’re used to sleeping on polyester. I am not; I will be itchy all night, and I won’t sleep a wink. So if I’m gone for a three- [or] four-week trip, I’ll take a 4.5kg suitcase, and 1kg of it might be an old cotton sheet. I cut a king size in half, and wrap myself up in it.

There’s much more to tourism in Africa than simply going on safari.

I would argue, having been to the 54 countries in Africa and being a beach snob, that Gabon has the best beaches, especially the peninsula part of the country that juts out into the Gulf of Guinea. I love Pongara: it’s a white-beige sand beach that you walk up to the water — crystal blue water — and see fish teeming in it. I stayed at Pongara Lodge. Animals like elephants live adjacent to this beach. It was a lot like if you had to imagine what Eden would look like.

When you’re planning a trip to space, this is what astronauts tell you to wear.

I hate to say this, but I was actually encouraged by a guy that was one of the astronauts that flew on a Hubble mission, Mike Good, to wear a male adult wetness protector — I don’t want to call it a diaper. So you load into the capsule, you’re there, it’s nerve-racking, you’re waiting. You don’t know whether you’re going to launch or not. And my concern was, “Gosh, what if you have to go?” The last thing you want to do is be concerned about is the bathroom; it’s a short enough flight, and you want to enjoy every second of it, right?

Create a routine around what you wear on any long trip.

In my right lower pocket goes my passport, and I keep it there at all times. After going through customs, I stop and take the time to put my passport right back into that pocket. Why there? Because that’s where it resides, always, and it being there keeps me organised. If it’s not there, something feels amiss. Same with the other pockets: in my left lower pocket is where my phone goes, and my wallet stays in my left upper pocket — it has a zipper, so I know that somebody can’t pickpocket me there. I leave my right upper pocket free for my boarding pass and anything else.

The family-friendly five-star resort he returns to again and again.

Four Seasons Peninsula Papagayo is a true luxury hotel and one of the nicest in Costa Rica. It sits on a hill overlooking the Pacific Ocean, but the gorgeous tropical view is just one thing that stands out. I’ve spent an inordinate amount of time there with my family — surfing lessons, zip-lining, or you go visit the volcanoes, river rafting, hiking.

Kitchen is no fan of street food on his travels — and here’s why.

I want to derisk anything as much as I can. My biggest fear while travelling is getting sick, and so I avoid eating most foods that are for sale on the street. There are those who advise the opposite. For them, trying new foods, especially street foods, is all a part of the adventure. I’m going to assume that, unlike me, they’ve never suffered the consequences of eating curried goat from a street vendor in Jamaica. You spent months getting visas for these places, and you did something stupid like eat curried goat, and I was sick for a week. I almost died.

An idyllic Seychelles island, the Victoria Falls, more direct flights to the States — thank goodness we can fly again
Life
3 weeks ago

When a hotel gets five-star applause, stay away

1.
Siyabonga Gama one of five former Transnet ...
News
2.
Working together in an office does not help ...
News
3.
Many infrastructure projects are behind schedule ...
News
4.
HSBC CEO Noel Quinn rebukes executive for ...
News
5.
Borer beetle could wipe out a quarter of SA’s ...
News

Devlin Brown at the water cooler: Do gym machines matter?

1.
Siyabonga Gama one of five former Transnet ...
News
2.
Working together in an office does not help ...
News
3.
Many infrastructure projects are behind schedule ...
News
4.
HSBC CEO Noel Quinn rebukes executive for ...
News
5.
Borer beetle could wipe out a quarter of SA’s ...
News

Devlin Brown at the water cooler: Do gym machines matter?