Such a move would allow Russia to order a mass mobilisation, potentially helping to jump-start its stalled invasion of Ukraine 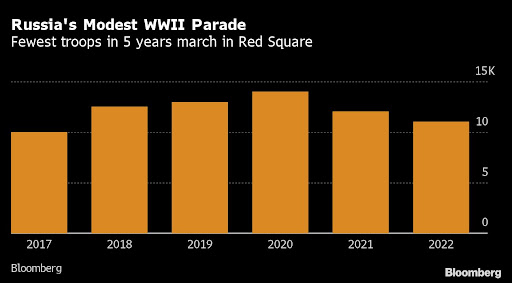 As he presides over his annual display of military might on Moscow’s Red Square, Russian President Vladimir Putin faces the task of showing that his 10-week-old invasion of Ukraine is making progress, even as his troops struggle to gain ground.

Putin greeted World War 2 veterans as he arrived at the ceremony on Monday ahead of a keenly awaited speech at the May 9 Victory Day celebration, marking the defeat of Nazi Germany in 1945. The display in 2022 includes 11,000 troops and weaponry including tanks, air-defence systems and nuclear-missile launchers. A planned flyover by military jets and helicopters has been cancelled because of cloudy weather conditions, state-run Tass news service reported, citing Kremlin spokesperson Dmitry Peskov.

Some Western officials have suggested Putin may move to formally declare war in the conflict that the Kremlin calls a “special military operation”. This would allow Russia to order a mass mobilisation, potentially helping to jump-start the stalled campaign. The Kremlin has denied any such plans.

Putin has made the Soviet Union’s triumph in what’s known in Russia as the Great Patriotic War, in which 27-million citizens of the Soviet Union died, a touchstone of his efforts to stoke patriotic feeling. This year, with tens of thousands of troops fighting in Ukraine and Russia facing unprecedented sanctions from the US and its allies, the event has taken on even greater significance. The Kremlin has claimed it’s fighting “neo-Nazis” in Ukraine, an assertion Kyiv and its allies dismiss.

“This war is presented as a war for World War 2 memory, a war against ‘Nazis’ and those who honour Nazis, a war to allow Russians and ‘decent’ Ukrainians to remember the 1945 victory the ‘right’ way (i.e. the Russian way),” said Jade McGlynn, a Russia expert at Oxford University.

The Russian leader, who attacked Ukraine after its pro-Western leadership moved towards closer ties with Nato, has so far failed to make significant progress in the war as the US and Europe ratchet up arms supplies to Kyiv’s military. The former Soviet nation is now getting heavy weaponry including tanks and artillery.

So far, the only major military triumph Putin has wrested is the still-incomplete fall of the southern port city of Mariupol after weeks of siege and bombardment that killed at least 20,000 civilians, according to Ukrainian officials. Ukrainian fighters are continuing to resist at the city’s giant Azovstal steel plant.

Russia is expected to stage a small-scale World War 2 event in Mariupol, where destruction was wrought on the city of 450,000.

This year’s parade in Moscow is smaller than recent years and the Kremlin didn’t invite any foreign leaders. In 2005, when Russia marked the 60th anniversary of the end of World War 2, more than 50 foreign leaders attended, including US President George W Bush, French President Jacques Chirac and Chinese President Hu Jintao.

Prior to the Moscow event, state TV showed military parades staged in smaller cities around Russia, which marks May 9 as a public holiday.

Putin’s closest ally, Belarus President Alexander Lukashenko, who allowed his territory to be used for the offensive, stayed in his capital Minsk to preside over World War 2 victory celebrations. In an interview with the Associated Press published last week, Lukashenko conceded the Russian assault “has dragged on” far longer than he expected.

In April, Russia abandoned efforts to seize Kyiv and oust Ukrainian President Volodymyr Zelensky and switched its focus to the southeast of Ukraine. But there too, its offensive has stalled, to date failing to seize all territory claimed by Kremlin-backed separatists in the eastern Donbas or complete a takeover of the southern coast.

The Russian campaign is very cautious with lots of back and forth as they win and then lose ground, a senior Nato official said. Still, Putin is undeterred and believes he can win, the official said.

Without declaring mass mobilisation like Ukraine has, Russia will see the balance of forces swing towards Ukraine, said Michael Kofman, an analyst of Russia’s military at the Virginia-based CNA think-tank.

“Russia has tried to take on a large conventional war in Europe at peacetime war strength. Much of it is now exhausted in terms of combat effectiveness,” Kofman said in comments aired by the Atlantic Council. “They are desperately short on manpower.”