President says the country is determined to restore its credibility 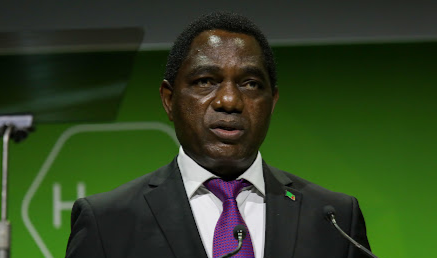 China and France will co-chair a creditors’ panel being set up to renegotiate Zambia’s foreign debt and the process is expected to be completed by the end of June, the country’s President Hakainde Hichilema said.

The first African nation to default during the pandemic, Zambia has external debt of about $17.3bn, more than a third of which is owed to China, and it has been struggling to rework its liabilities since 2020. The establishment of the official creditors’ committee should add impetus to the process and make it easier for Zambia’s government to access new funding.

“It took us a bit of time to get China on board. China is on board,” Hichilema, who took office in August 2021, told reporters at the Investing in African Mining Indaba conference in Cape Town on Monday. “As a country, we are clear what we would like to achieve, which is to reduce the overall burden and not to create new liabilities that would defeat the purpose.”

Hichilema’s government has adopted the Group of 20’s so-called Common Framework for debt treatment designed to help poor countries. While his government won preliminary approval for a $1.4bn support package from the IMF in December, the restructuring talks need to be concluded to win final approval from the IMF board.

The debt reorganisation is “based on the principle of equal burden-sharing”, Zambian finance minister Situmbeko Musokotwane told reporters on Monday in Cape Town. “That takes different forms. For some a haircut if that is suitable for their purposes, for some it is stretching the period of the payment, for some it is about adjusting the interest rate, for some it is a combination of all of those.”

In February an alliance of local activist organisations and Jubilee Debt Campaign UK estimated that Zambia has capacity to repay between $2.8bn and $3.5bn of debt over the next 14 years, meaning about $7bn would have to be written off. That would imply private and bilateral lenders may have to forgive as much as 71% of their loans, said the groups, which did not include debt owed by state companies in their calculations.

The issue of debt sustainability and affordability will be addressed with the creditors, and definitive numbers have yet to be determined, according to Musokotwane.

Creditors whose debt servicing has been suspended since 2020 have not been complaining because “they all feel that the approach we are taking is the only realistic path toward resolving the issue so that they get paid”, he said. “There is so much goodwill from all the creditors and everybody else to make this thing a success.”

In rebuilding the economy the government needs to be prudent and to stop being wasteful as well as tackle corruption, he said. “This is not IMF messages, these are our messages. They simply dovetail with the IMF.”

MICHAEL AVERY: What government must tell Mining Indaba to jack up investor outlook

Amid the PCR tests and evening tipples, the country needs to assure potential investors it can keep the lights on and get back on track
Opinion
3 weeks ago
Next Article