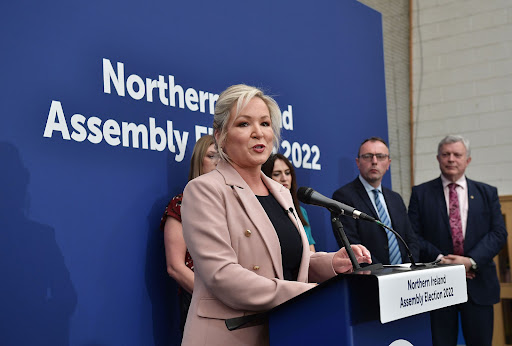 Sinn Fein’s northern leader, Michelle O’Neill, who is likely to be nominated as the region’s first minister. Picture: BLOOMBERG

Sinn Fein is the biggest party in Northern Ireland’s Assembly for the first time, a historic election result that marks a significant shift in the region’s balance of power and sends a strong message to Boris Johnson’s government in London.

The nationalist party, whose ultimate goal is to unite Northern Ireland with the neighbouring Republic of Ireland, won the largest number of seats and intends to nominate its northern leader Michelle O’Neill as the region’s first minister.

“Today represents a very significant moment of change,” O’Neill, 45, said on Saturday. “It’s a defining moment for politics and for people. Today ushers in a new era.”

It’s the first time that a nationalist party has topped the vote since the power-sharing government was established after the 1998 Good Friday Agreement, which largely ended decades of violence between unionists and nationalists.

While the prospect of reuniting the island for the first time since 1921 remains far off, the election shows that parties backing a unionist future with Britain are in retreat.

“Northern Ireland was founded as a Unionist state, with an inbuilt Unionist majority,” said Brian Hanley, assistant professor in 20th century history at Trinity College Dublin. “The election of not just a nationalist as first minister, but a republican from a tradition which rejects the partition of Ireland entirely, is seismic.”

Sinn Fein won 27 seats in the 90-seat Assembly, overtaking the formerly dominant pro-British Democratic Unionist Party (DUP), which secured 25, according to the BBC. The former political wing of the Irish Republican Army won 29% of first choice votes, while the DUP drew 21% support in the election held on May 5.

The results also show the exponential rise of a third force — the centrist and pro-EU Alliance Party, which more than doubled its number of seats to 17 from eight.

Its success in part reflects the rising number of people who have rejected traditional sectarian loyalties. That may support calls for constitutional reform to the power-sharing system, which gives preference to parties designated as unionist or nationalist.

“It suggests we do now have a three-block landscape,” said Katy Hayward, professor of political sociology at Queen’s University Belfast. “We’ve known there [are] people who are neither unionist nor nationalist for a long time, it’s just that they’ve never had the confidence in voting so clearly. In the past, ‘other’ has seemed like a wasted vote.”

The outcome deals a heavy blow to unionists, with the formerly dominant pro-British DUP losing seats from 28 in 2017.

The DUP’s losses will be felt keenly by the UK’s Conservative government, still embroiled in a battle with the EU over Brexit and arrangements governing trade for Northern Ireland.

The Northern Ireland Protocol puts a customs border in the Irish Sea between the region and the rest of Britain to prevent a hard border on the island of Ireland. The DUP centred its campaign on opposing the arrangement.  Johnson’s UK government says the protocol disrupts trade in the region and wants it rewritten.

“The worse the DUP perform, the harder it is for the UK government to keep credibly to their Northern Ireland approach,” said David Henig, who focuses on UK trade at the European Centre for International Political Economy think-tank.

Focus will now turn to forming a new devolved government, with Sinn Fein and the DUP eligible to nominate the first and deputy first ministers. Under the power-sharing arrangement, the posts are equal and one cannot be in position without the other. However, DUP leader Jeffrey Donaldson said on Saturday he would wait for the UK government’s response on the protocol before deciding whether to participate.

If an executive cannot be formed, the assembly can continue to function for six months, though it cannot sign off on key decisions such as budgets.

“Until the executive is formed, until there’s a budget in place then we don’t have the wherewithal to support families and indeed businesses with the cost of living crisis,” said Stephen Kelly, CEO of Manufacturing NI. “On a purely practical level, that’s essential right now.”

UK secretary of state for Northern Ireland Brandon Lewis said he will be meeting with party leaders and will urge them to form a new executive as soon as possible.

Meanwhile, Sinn Fein’s success will probably bolster calls for a united Ireland, a cause boosted by fallout from Brexit north and south of the border.

Sinn Fein has said it intends to begin planning for a border poll, though under the Good Friday Agreement this can only be called by the UK government and only if it is likely to pass in the north. Only 32% of people backed the idea in an April survey for The Irish News, while 48% opposed it.

Even so, Sinn Fein is the most popular party in the Republic too, drawing 33% support in a recent Irish Times poll, 10 points ahead of Prime Minister Micheal Martin’s Fianna Fail.

Though this week’s result in Northern Ireland doesn’t “mean a united Ireland is inevitable, it makes this question being raised unavoidable”, said Hanley.