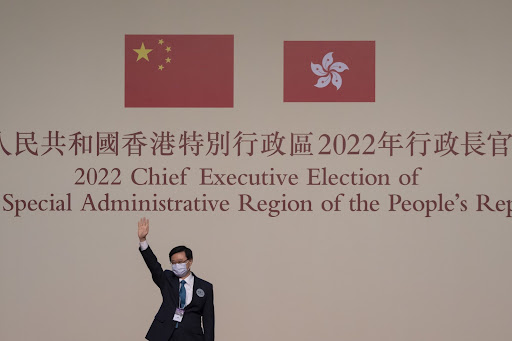 John Lee, named Hong Kong’s next CEO in a rubber-stamp election that’s been criticised as unfair, vowed to strengthen national security and accelerate the city’s integration with mainland China.

Speaking in Cantonese and English shortly after his victory was announced, the former police official and security minister outlined his service to China and Hong Kong and said his new job calls for accountability to both Beijing and the city. His administration will continue to uphold the rule of law, which is a “core pillar of sound governance”, he told reporters on Sunday.

“Safeguarding our country’s sovereignty, national security and development interests, protecting Hong Kong from internal and external threats and ensuring its stability will continue to be of paramount importance,” he told reporters at the Hong Kong Convention and Exhibition Centre, the election venue.

Lee served on the police force for more than three decades before joining the security ministry, epitomising China’s focus on national security after a wave of huge and sometimes-violent democracy protests in 2019. He helped incumbent CEO Carrie Lam crack down on the demonstrations and implement a powerful Beijing-drafted national security law that’s resulted in the arrest of some 182 people and the closing of at least a dozen news organisations.

Sunday’s ballot was the city’s first to be held in more than two decades without at least a nominal contest. Lee was the only candidate put forward to an election committee revamped by Beijing in 2021 to stack more pro-establishment members. The changes to the system made it all but impossible for an opposition candidate to compete, while the Communist Party’s endorsement of Lee rendered his victory a fait accompli.

Out of the 1,424 valid votes cast by electors, Lee won 1,416 — more than the simple majority needed to confirm his appointment. Eight electors voted against him, while four ballots were declared invalid.

The voting process drew criticism from the EU, which called on Chinese and Hong Kong authorities to abide by their national and international commitments, particularly the aim of electing the CEO and members of the legislative council by “universal suffrage”.

In a statement on Sunday, the EU said it “regrets this violation of democratic principles and political pluralism and sees this selection process as yet another step in the dismantling of the ‘one country, two systems’ principle”. Eight Hong Kong activist groups based in Europe urged governments and parliaments not to recognise the vote, saying “the new leader will be nothing more than a dormant figure controlled by Beijing”.

Samuel Chu, founder and president of Washington-based The Campaign for Hong Kong said Lee is the “designated enforcer” for Beijing, “who oversaw the transformation of one of the freest cities in the world into one of the most repressed.”

But the Hong Kong and Macao Affairs Office of China’s State Council on Sunday said the election represented “another successful practice” of the new system and the city is poised for a brighter future.

There was barely any dissent visible in the city with public gatherings of more than four people still banned due to Covid-19 restrictions and critical speech heavily penalised under the National Security Law. Three activists from the League of Social Democrats protested in the Wanchai neighbourhood before being stopped about one block away from the polling venue.

Keeping with his focus on security, Lee said article 23 — which says Hong Kong shall enact laws prohibiting treason and sedition — will be implemented “in due course” after consultations with a policy bureau and legal experts. The legislation was shelved in 2003 after it triggered huge demonstrations.

Lee, who will take over from Lam on July 1, said he would work to enhance Hong Kong’s overall competitiveness and maximise its strength under the “one country, two systems” principle by seeking to proactively integrate the city’s economy with the Greater Bay Area in the neighbouring Guangdong province.

“We must expand our international connectivity, establish a more favourable business environment and increase our overall competitiveness,” Lee said. Housing in the world’s least affordable market and inequality are also high on his agenda, he said.

But Lee didn’t clearly address a query on Sunday on how soon the city will reopen to the outside world after remaining insulated since the start of the pandemic.

The financial hub is torn between Beijing’s demands for strict border controls to reopen links to the mainland and business groups demanding greater access to international travel. While the city has been easing many restrictions, other limitations, particularly on new arrivals and their quarantine requirements, remain strict. The city is still lagging far behind rivals like Singapore, where borders have been reopened and life has largely returned to pre-pandemic standards.

Lee acknowledged that Hong Kong’s social distancing and remaining travel restrictions were creating an “inconvenience,” while simultaneously acknowledging that he’s “very conscious of the need to make Hong Kong accessible to the world.”

“I think we can work together to make this possible” if everyone follows the advice and the measures of the government, and boost vaccination rates, he said.