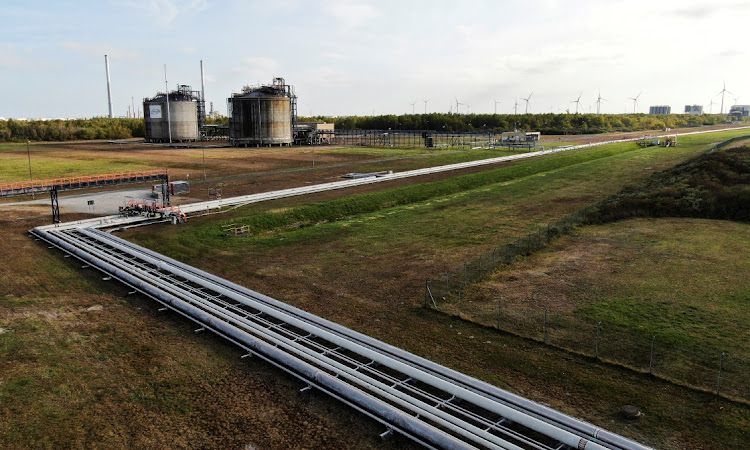 An aerial view of a pier for a planned floating liquefied natural gas terminal in the harbour in Wilhelmshaven, Germany. File photo: REUTERS/STEPHANE NITSCHKE

Less than a decade after selling much of its physical raw-materials business, JPMorgan Chase is rebuilding in the US natural gas sector, and in a big way.

In 2021, the bank bought or sold altogether 314.2-trillion British thermal units (Btu) of gas, up from just 43.9-trillion Btu in 2020, according to data filed with the Federal Energy Regulatory Commission.

Other numbers also show how its presence has grown.  According to natural gas marketing firm Vennsmith Carbon’s market intelligence platform, the bank had 672.9-billion Btu a day of US pipeline space contracted either directly or on for others at the start of the first quarter, a stone’s throw from the volume it had under contract halfway through 2014, just before it sold a large chunk of its commodities business to trading house Mercuria Energy Group. JPMorgan declined to comment.

That sharp jump in activity doesn’t make JPMorgan the biggest bank in US natural gas — several rivals including units of Macquarie Group and Goldman Sachs moved much more of the fossil fuel than JPMorgan did in 2021. But it does mark a stark reversal from the bank’s earlier decision to reduce its activity in the sector, including selling some of its sizeable natural-gas trading operation originally valued at hundreds of millions of dollars.

Other banks including Wells Fargo  and Morgan Stanley have been expanding their gas volumes, too, FERC data show. Several institutions, some of which pushed raw materials to the back burner in the years following the financial crisis, have once more ramped up their trading capabilities in power and natural gas. Some big-name trader hires may signal even more expansion is ahead.

They’ve been drawn to gas’s high volatility and its growing appeal during the energy transition. For any remaining doubters, a freak Texas snowstorm in February 2021 that reaped gas traders and other sellers an $11bn windfall as prices spiked showed that there’s still big money to be made in the sector. Commodities as an asset class gained even more attention due to Russia’s invasion of Ukraine as prices of key materials surged to multiyear highs.

“Participants in the natural gas market continue to evolve with a renewed interest by both banks and merchants due to increased volatility,” said Ossie Okeke, managing partner at Vennsmith. “This has real effects on liquidity and credit.” Greater liquidity and increased participation from banks can facilitate more flexibility for commercial players including gas producers conducting trades or hedging their risk.

JPMorgan’s effort to rebuild gas trading is being overseen by Kapil Bhatia, who was promoted to lead commodities for the bank in late 2021.

To be fair, not all of the banks participating in physical gas trading exited in the first place; some have been ramping up for years. JPMorgan never fully stepped away and continued to do some small-scale transactions and hedging for clients even after selling parts of the business, a person familiar with its strategy said. Daniel Pinto, now JPMorgan’s president, said at the time of the sale the company would also retain the components of the commodities division that are “traditional business for banks, which is financial commodities, precious metals and vaulting”.

Natural gas has been one of the most volatile commodities over the past two years, something traders look for so that dislocations in prices can create opportunities to profit. The extreme weather in Texas last year provided a major boost for banks that were already active in the space. Futures prices at Henry Hub, the US benchmark, are at a 13-year high. At more than $8 per million Btu, gas is about double where it was the day JPMorgan closed the sale of commodity assets to Mercuria. Client interest in the segment has skyrocketed as a result. Investor interest in trading commodities as a hedge against soaring inflation has also grown.

But banks aren’t necessarily trading the same way as they were during the Obama era, as pressure from regulators to limit proprietary trading has some institutions rethinking their strategies. JPMorgan, for one, is increasingly trading physical gas as an agent, meaning it’s often acting on behalf of other companies instead of taking ownership of the gas itself.

As an agent, JPMorgan can contract pipeline space for clients — and use that space for other trades when the customer isn’t using its allotted space. That allows banks to capture profits from buying and selling at different locations, known as arbitrage trading.

Some of that trading is done for shale producer Antero Resources  under a deal entered in 2020 that allows the bank to market the driller’s barrels as part of a lending agreement, company filings show.

Renergen’s subsidiary Tetra4 wholly owns a gas plant in the Free State, SA’s only onshore petroleum development right, which contains among the ...
Companies
3 weeks ago

Justin Trudeau’s officials have shunned any push to speed up the phasing out of fossil fuels, in favour of a slower path
News
3 weeks ago
Next Article