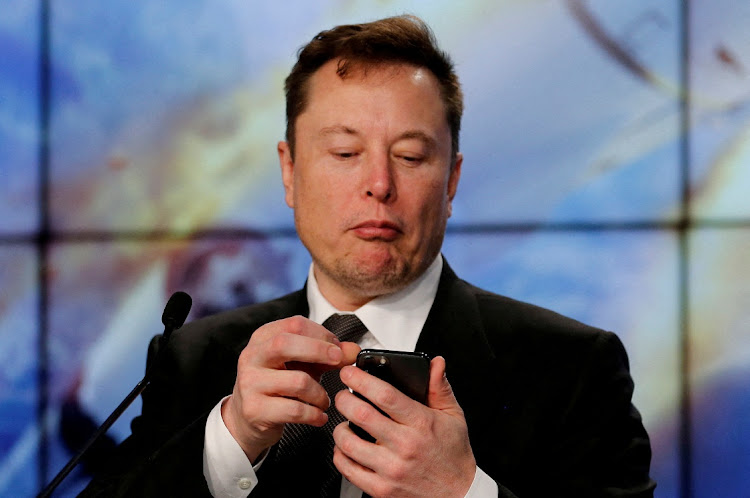 Elon Musk looks at his mobile phone in Florida, the US. Picture: JOE SKIPPER/REUTERS

Elon Musk’s $7.1bn of new financing commitments to help him buy Twitter  for $44bn come from the highest rungs of global finance — and some familiar faces from his other ventures.

The Tesla co-founder won over the Saudi price who initially balked at his offer and brought aboard Larry Ellison, the 11th-richest person on the Bloomberg Billionaires Index. He also got a $500m commitment from cryptocurrency exchange Binance.

Musk also got hundreds of millions of dollars from Sequoia Capital, a big backer of his Space Exploration Technologies, and Vy Capital, which has previously invested in his Boring Company and Neuralink.

There might be more money to come. Twitter founder Jack Dorsey, whose stake is worth about $1bn, is continuing to have discussions about keeping his holdings in the company, according to a Thursday regulatory filing. 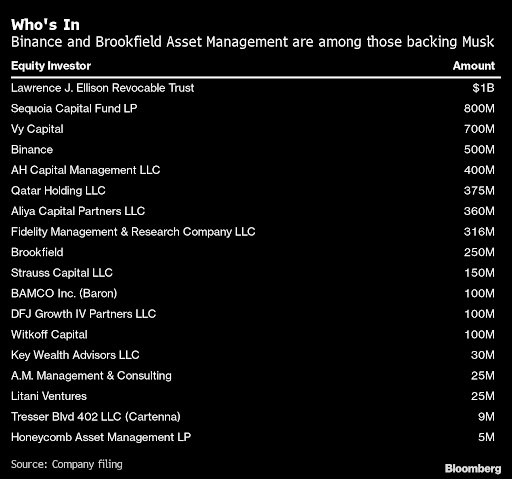 Alwaleed has pledged to roll over his nearly 35-million Twitter shares, according to Thursday’s filing, which are worth about $1.9bn at a price of $54.20 per share.

With a $16.4bn fortune, he’s the richest individual in Saudi Arabia, according to the Bloomberg Billionaires Index. Most of his wealth is derived from his 95% ownership of Kingdom Holding.

He initially rejected Musk’s bid, saying the deal didn’t “come close to the intrinsic value” of the popular social-media platform. The move prompted a rapid retort from Musk, who asked how many shares the investor held in Twitter and the Kingdom’s view on freedom of speech for journalists.

Ellison has made a fortune from Tesla. His stake in the electric carmaker is worth more than $14bn. He was already one of the world’s richest people after founding Oracle. He has a $95.6bn fortune, as per the Bloomberg Billionaires Index.

Sequoia Capital has been a major backer of Musk’s SpaceX and the links between the billionaire and some people at the firm go back a long time. Sequoia partner Roelof Botha was CFO at PayPal when Musk was its CEO two decades ago.

Vy Capital is a Dubai-based tech investment firm. Its website says it has “a focus on category-defining technology companies with the potential to meaningfully impact humanity”. It has previously invested in Musk’s ventures, including Neuralink and Boring.

This is the second high-profile investment in a media company for Binance, the world’s largest cryptocurrency exchange. The firm, founded by billionaire Changpeng Zhao, has also invested in Forbes.

AH Capital is the investment adviser of A16Z and was cofounded by prominent venture capitalist Marc Andreessen. Since Musk announced his plan to buy Twitter, Andreessen has encouraged the move, engaging with Musk on the social-media platform and even changing his biography to “shadow crew”, a jab at a Wall Street Journal article about those behind the scenes who encouraged the takeover.

Miami-based Aliya, led by CEO Ari Shrage, has investments in companies it deems innovative and disruptive. Late in 2021, it was part of a $125m Series B funding round for Kodiak Robotics, a self-driving truck start-up.

Musk is also getting backing from some large US institutional investors. Boston-based Fidelity Investments, led by CEO Abigail Johnson, ended 2021 with $4.5-trillion of discretionary assets.

Toronto-based Brookfield Asset Management oversees about $700bn. CEO Bruce Flatt said recently in an interview with David Rubenstein that his key to success is to encourage employees to make small mistakes every day, “just don’t make any really large mistakes”.

Strauss is a New York-based investment banking firm founded by Tom Strauss, a former co-head of the mergers and acquisitions group at Barclays’s US investment-banking arm.

Musk secured investments from several other firms, in denominations of as little as $5m.

He’s still looking for more investors. He “will continue to have, discussions with certain existing holders of common stock (including Jack Dorsey) regarding the possibility of contributing such shares of common stock to parent, at or immediately before the closing of the merger, to retain an equity investment in Twitter after completion of the Merger,” according to Thursday’s filing.