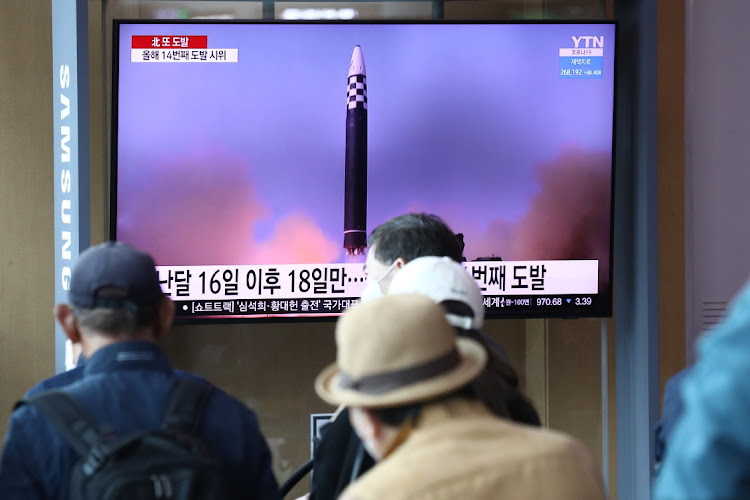 People watch a television broadcast showing a file image of a North Korean missile launch at the Seoul Railway Station on May 4 2022 in Seoul, South Korea. Picture: GETTY IMAGES/CHUNG SUNG-JUN

North Korea fired a possible mid- to long-range ballistic missile into the sea off its eastern coast, the Yonhap News Agency said, after Kim Jong Un pledged to accelerate the development of his nuclear programme.

The launch comes after Kim vowed at a military parade last week in Pyongyang to speed up the development of his weapons programme. US President Joe Biden is expected to make his first visit to Seoul, South Korea as president later this month, after months of failed overtures to Pyongyang to restart talks.

“North Korea seems to have resumed its martial protests before Biden’s visit to South Korea later this month and as the US deploys its strategic assets around the Korean Peninsula,” said Cheon Seong-whun, a former security strategy secretary for South Korea’s presidential office.

In late March, North Korea fired an ICBM that reached an altitude of 6,200km and travelled 1,080km to splash down in the sea to the west of Japan, which was higher and farther than North Korea’s last successful ICBM test in November 2017.

North Korea tried to deceive the world about the type of missile it fired, claiming that it successfully tested a “huge” new ICBM, while actually firing off the same rocket launched four years earlier, South Korean defence officials said.

North Korea said it fired a Hwasong-17, which it first unveiled in an October 2020 military parade. Weapons experts described it as the world’s largest road-mobile ICBM and it appeared designed to carry a payload of multiple nuclear warheads to the US mainland.

South Korea said its neighbour likely fired off a Hwasong-15 on March 24, which is thought to be able to deliver a single warhead to all of the US mainland, after a failed launch on March 16 of a Hwasong-17.

On April 17, it fired two projectiles that flew about 110km, which Pyongyang said were a new type of tactical guided weapon. The range was far less than that of its short-range ballistic missiles.

Over the past several months, Kim’s regime has tested a variety of missiles designed to evade US-operated interceptors and increase the threat of a credible nuclear strike against the US and its allies in Asia.

Biden is scheduled to visit South Korea on May 20. Any display of the weapons in Kim’s nuclear arsenal would serve as a reminder of the pressing security problems posed by Pyongyang that have simmered as his administration has been focused on Russia’s invasion of Ukraine.

Kim enacted a self-imposed moratorium on tests of nuclear devices and intercontinental ballistic missiles that could deliver a warhead to the US mainland to facilitate talks with then President Donald Trump in 2018. The two met three times and their discussions resulted in no tangible steps to wind down Pyongyang’s atomic arsenal — which only grew larger as their talks sputtered.

Satellite imagery indicates Pyongyang has been restoring tunnels at the Punggye-ri site where it conducted all six of its previous nuclear tests, in what could be the harbinger of an imminent test of an atomic device.