The city's authorities say that the lockdown will only be lifted once community transmission reaches zero, but community spread count now stands at 50+ a day 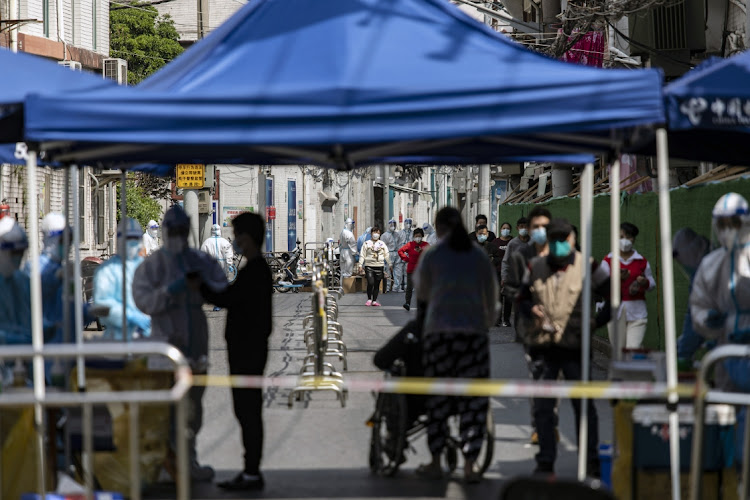 Residents line up for a round of Covid-19 testing in a neighborhood during a lockdown due to Covid-19 in Shanghai, China, on May 3 2022. Picture: BLOOMBERG

Shanghai’s final exit from a punishing five-week lockdown is being delayed by Covid-19 infections persistently appearing in the community, despite China’s hardline strategy of isolating all positive cases and their close contacts.

While total cases in the financial hub keep falling — 4,982 infections were reported for Tuesday, down from 5,669 on Monday — community spread remains stubbornly present. After briefly hitting zero late last week, the count has bounced back to more than 50 a day this month.

Shanghai authorities have indicated that the lockdown will only be lifted once community transmission reaches zero — the same path taken in Jilin province in the northeast, where a lockdown gradually started to ease once there was no more community transmission. But it’s uncertain when that may be, and comes as the persistent number of cases indicates Omicron may be able to outmaneuver the harsh movement restrictions.

This [lockdown] is like using fighter jets to kill mosquitoes,”

Jin Dongyan, a professor of medicine at Hong Kong University

Health authorities didn’t give details on the community transmission beyond that the infections were found through testing high-risk people.

“I don’t know where they’re still finding these cases. The overall trend of the outbreak looks good, but it’s hard for outsiders to have an accurate grasp of the situation,” said Jin Dongyan, a professor of medicine at Hong Kong University (HKU). Hong Kong and many other places globally have shown that infections decline naturally without a drastic intervention like a lockdown, he said.

“This is like using fighter jets to kill mosquitoes,” he said.

About 2.54-million of Shanghai’s total population of about 25-million remained under the strictest form of lockdown by May 2, officials said at a briefing Tuesday. The city will continue to mass test, using both PCR and rapid antigen tests (RATs), through May 7.

While the lockdown is dragging on for some residents, many companies are already back up and running by using so-called closed-loop management where staff work and live on site and undergo regular testing. Shanghai’s government released a list of 24 construction projects allowed to resume work, including projects from Tencent and Alibaba Group.

In Beijing, which is going to extreme lengths to contain a nascent outbreak to avoid the social and economic dislocation seen in Shanghai, cases fell to 51 on Tuesday 3 May from 62 on Monday 2 May.

Officials on Tuesday 2 May urged residents not to leave the city unnecessarily, with only people with green health codes and who have received a negative Covid-19 test within 48 hours able to leave. Schools will suspend in-person classes between May 5 and 11, with districts set to make plans for online learning.

Residents in areas deemed to be medium or high risk, those who live in controlled areas, and people in towns or villages that have one or more infections are not able to depart the city, officials said at a briefing.

The city also shut more than 40 subway stations, about 10% of the network, on Wednesday 4 May. Most of the affected stations are in the Chaoyang district in east Beijing, including an interchange that serves a central business area.

The capital had earlier halted dining-in at restaurants for the duration of the May Day holiday, which runs through Wednesday, made entry into places like parks and monuments dependent on a negative Covid-19 test and has shuttered gyms.

Authorities have also locked down apartment blocks — forcing some residents to stay in their homes, not allowed out for groceries or exercise — and ordered another three rounds of mass testing.

Elsewhere, Zhengzhou’s 10-million residents have been put into lockdown.