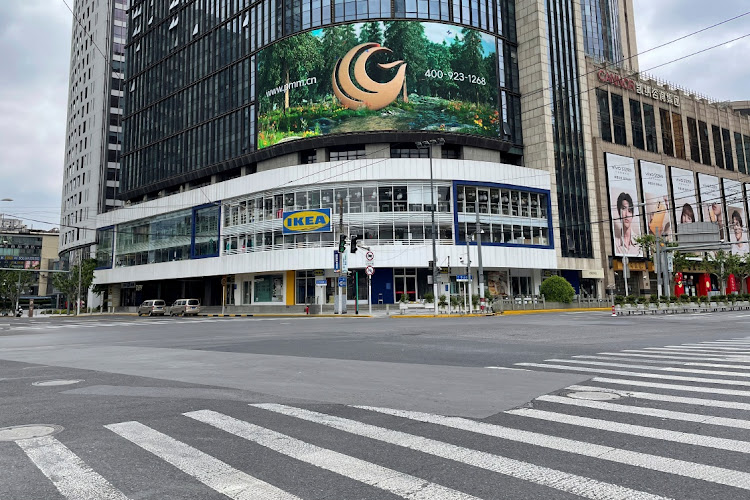 An empty street and a closed IKEA store are pictured amid a Covid-19 outbreak, during the Labour Day holiday in Shanghai, China, on April 30 2022. Picture: REUTERS/BRENDA GOH

China’s economic activity contracted sharply in April as the lockdown of Shanghai and other areas about the country to contain a widespread Covid-19 outbreak closed factories, snarled roads and stopped people from consuming, escalating concerns about further disruption to global supply chains.

The slump was widespread in April, with factory output contracting further and services demand much weaker than forecast. The purchasing managers indexes are the first official April data and show the extent of the damage to the economy due to the outbreak and the government’s Covid-19 Zero policies.

Factory activity fell to the lowest level in more than two years, with the official manufacturing PMI dropping to 47.4 from 49.5 in March, according to data released by the National Bureau of Statistics on Saturday. That was largely in line with the median estimate of economists.

The non-manufacturing gauge, which measures activity in the construction and services sectors, plunged to 41.9 from March’s 48.4, hitting the lowest since February 2020 and well below the consensus forecast of 46. A reading above 50 indicates expansion, while anything under indicates contraction.

The deterioration in manufacturing activities was due to sharper declines in both production and demand, the statistics bureau said in a statement. The latest Covid-19 outbreaks, which have hit multiple places across the country, have forced some enterprises to reduce or even stop production. 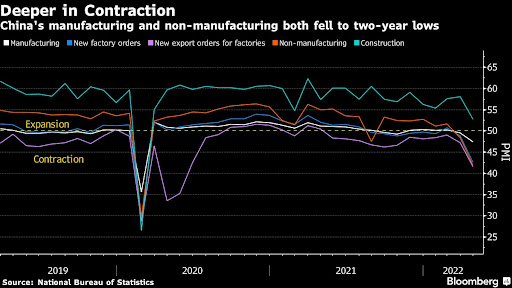 China’s economic activity contracted sharply in April as the lockdown of Shanghai and other areas around the country to contain a widespread Covid-19 outbreak closed factories, snarled roads and stopped people from consuming, escalating concerns about further disruption to global supply chains. Graphic: BLOOMBERG

Activities in the service industry fell sharply “due to the severe impact from the outbreaks”, said Zhao Qinghe, an NBS senior statistician. Business activity contracted in 19 of the 21 surveyed sectors, including air transport, accommodation and catering, he said.

An index measuring the delivery time of suppliers dropped to 37.2 from 46.5, suggesting that it’s taking much longer for raw materials to reach their manufacturing customers, despite repeated vows by authorities to keep transportation and logistics running smoothly. The importance of guaranteeing supply chains was reiterated by the Politburo on Friday.

Meanwhile, inventories of finished goods rose to the highest level in more than a decade, with finished products likely piling up in warehouses due to both the slump in demand and the difficulty of getting goods on to trucks.

“Many companies said logistics and transportation difficulties have increased,” Zhao said. “Some even experienced difficulties in getting supplies of main raw materials and key components, poor sales of finished products, and the backlog of inventory, among other problems.”

Construction activities continued to expand but at a weaker pace as Covid-19 controls restricted the movement of workers. President Xi Jinping this week called for all-out efforts to spur infrastructure spending, saying it was a pillar of economic and social development. Economists also expect infrastructure investment to play a key role in supporting growth.

Activities at firms of different scales all contracted in the month, with the situation at small enterprises worse than at medium and large-sized firms. An index tracking activities at large firms fell below the 50-mark for the first time since February 2020.

Beijing is under increasing pressure to boost growth as Covid-19 outbreaks and restrictions in many cities paralyse much of its economy, the world’s second largest.

Many manufacturers have tried to keep operating by using so-called closed-loop systems, where workers live on site and are tested regularly. But activity has still been hampered by lengthy curbs on mobility, including in places like Shanghai, where large swathes of the population have been locked down for a month or more.

Logistics bottlenecks have caused parts shortages and made moving people and goods within the country and across borders difficult. Consumer spending has also dropped as people stay home, voluntarily or unwillingly.

“I expect GDP growth in the second quarter to turn negative, as lockdowns will likely be on and off,” said Zhang Zhiwei, president and chief economist at Pinpoint Asset Management. “The key issue going forward is how the government will fine-tune its ‘zero tolerance’ policy to mitigate the economic damage.”

Policymakers have escalated their pledges to support the economy, culminating in Friday’s high-level Politburo meeting, where top leaders led by Xi promised to use more pro-growth policy tools. They reiterated a call for the government to strive for full-year economic goals, though did not back down from the country’s Covid-19 Zero policy. Some economists have deemed the strategy the biggest risk to growth.