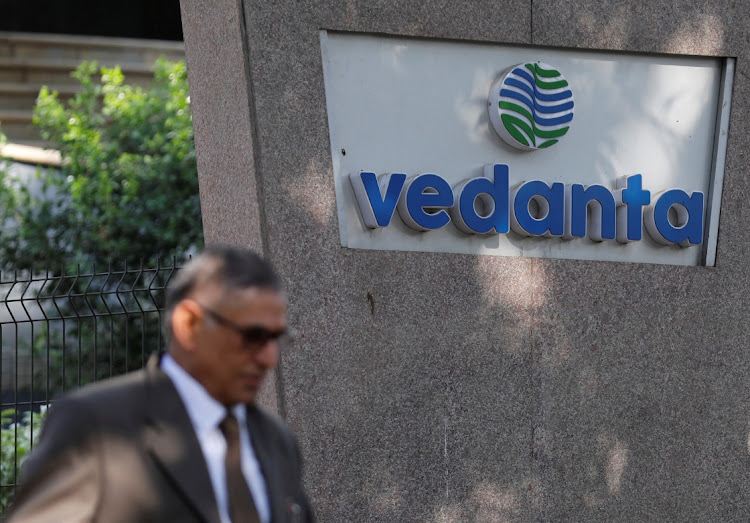 A man walks past the logo of Vedanta outside its headquarters in Mumbai, India on January 31 2018. Picture: REUTERS/DANISH SIDDIQUI

Vedanta will issue 117.1-billion rupees ($1.5bn) of dividends to shareholders, triggering a rally in the bonds of its parent that will use the income to pay down debt.

Vedanta will pay a dividend of 31.50 rupees a share to investors, it said in an exchange filing on Thursday. That will provide some relief to its parent Vedanta Resources, which faces a wall of maturities, beginning with a $1bn note due in July.

Separately, Vedanta Resources announced a tender offer to buy back as much as $500m of its dollar notes due in July, it said in an exchange notice in Singapore. The company said it will use about half the $1bn it receives as dividend from the Indian unit.

The parent firm’s dollar bonds rose the most in six weeks Friday, with the notes maturing in July hitting the highest level since October, according to Bloomberg-compiled data.

Billionaire Anil Agarwal’s Mumbai-listed company paid about $2.2bn to shareholders in the year ended March. In March, S&P Global Ratings had flagged that dividends from Vedanta, which is 70% owned by its London-based parent, would probably contribute to a large part of Vedanta Resources’ debt servicing as refinancing over the next six months becomes more challenging.

“If the past is an indication, looking at the profitability, one may expect that dividend will remain high,” Ajay Goel, acting CFO, said in a post-earnings call. It will help the parent cut debt by $4bn over the next three years, he said.

Reduction of the parent’s debt will be front loaded, with at least $1bn coming this fiscal year, Sunil Duggal, CEO of Vedanta, said on another post-earnings call on Thursday.

Meanwhile, group net income dropped nearly 10% from a year earlier to 58-billion rupees in the January-to-March period, the Indian unit said. That would be the first year-on-year decline in profit since the quarter ended September 2020. It also missed analysts’ estimate.

Industries across the world have been grappling with higher energy and commodity costs that have been exacerbated by Russia’s war in Ukraine as supply chains get upended. Locally, Indian mills are finding it difficult to secure thermal coal supplies, especially aluminium producers, as the government diverts the fuel to the power sector.

Shares of Vedanta rose 1.6% in Mumbai Friday, extending the year’s gains to nearly 23%. Analysts have 13 buy recommendations on the company, three holds and two sells, according to data compiled by Bloomberg.

Why Sibanye walked away from $1bn nickel deal

Why Sibanye walked away from $1bn nickel deal