Alexander Abramov’s Titan expected to head to the Aegean Sea, as Turkey has not joined Western governments in imposing sanctions on Russia 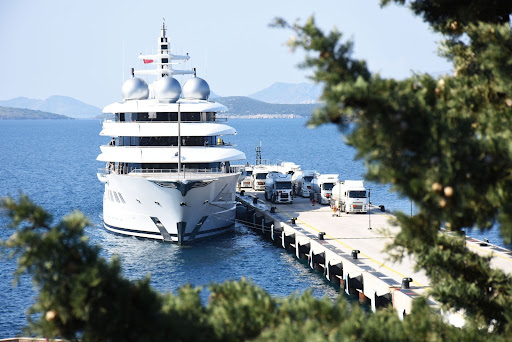 The $100m megayacht Titan tied to steel billionaire Alexander Abramov is racing near top speed to reach the Suez Canal, likely bound for the safe waters of Turkey favoured by other sanctioned Russian moguls.

The Titan, a $100m yacht that can accommodate 14 guests and 19 crew, is headed towards the Suez Canal after long stays in Dubai and the Maldives, two destinations that are considered safe havens from sanctions and the seizure of Russian assets. Abramov, who is worth about $7.3bn and cofounded Russia’s second-biggest steelmaker Evraz, is on Australia’s sanctions list.

The Titan is likely headed for Turkey, where other sanctioned Russian tycoons have parked their multimillion dollar floating palaces. Turkey has not joined Western governments in imposing sanctions on Russia.

“Looking at historical data, the possible destination for the Titan once past the Suez Canal and into the Mediterranean could be the Aegean Sea, the entry point to Turkey,” said Jerome Weiss, maritime data scientist at Spire Global, which provides space-based analytics and data. “Travel to Turkey, a country that has yet to enforce sanctions against Russia, may be the reason we’re seeing increased yacht movement in the region.”

Since sanctions were enforced, the Aegean Sea has become a destination stop for 9% of yachts connected to sanctioned Russian oligarchs in March and April, up from about 1% in those months since 2019, according to Spire.

Western governments, including the US and its allies, have imposed sanctions on tycoons with close ties to Russian President Vladimir Putin to deter Moscow’s war on Ukraine. While the governments try to locate and seize luxury vessels and other properties of Russian moguls, Russian luxury yachts have scattered to locales unlikely to seize them.

Meanwhile, the US is seeking mutual legal assistance from Fiji to seize the $325m Amadea tied to gold billionaire Suleiman Kerimov. A Fijian court has ordered the detainment of the luxury vessel, preventing it from leaving the South Pacific territory while authorities work with the US to formally seize it. A Fiji judge will rule on the registration of the US seizure warrant on May 3.

Abramov’s 263-foot long Titan arrived in the Maldives on February 4. On the day Russia invaded Ukraine, February 24, the ship broadcast that it was headed for the swanky Ritz Carlton resort on the Fari Islands, according to an analysis of Bloomberg vessel data. Four days later, the ship broadcast it was headed to the airport, which is accessible by water and seaplanes.

On March 15, the day the EU imposed a fourth round of sanctions that targeted oligarchs Roman Abramovich, German Khan and other prominent businessmen, the Titan began moving away from the Maldives. By March 17, it was in Dubai, where other megayachts connected to sanctioned Russians have docked. The United Arab Emirates, which includes Dubai, has not enforced international sanctions and appears to still welcome sanctioned Russians.

The Titan was moored in Dubai on April 7 when Australia added Abramov, along with 66 other Russians, to its financial sanctions list and travel ban for “their role in Russia’s unprovoked, unjust and illegal invasion of Ukraine,” according to a foreign ministry statement. Abramov is not sanctioned by the US, UK or the EU.

If the Titan reaches Turkey, it will be joining other yachts in the area tied to sanctioned moguls.

The Eclipse, the yacht tied to Abramovich, whose Chelsea Football Club is under the control of the charitable Chelsea Foundation, is in waters near Turkey. Oleg Deripaska’s superyacht, Clio, made a similar journey to the Titan this month. It departed the Maldives, crossed the Suez Canal and anchored in two Turkish ports before it stopped broadcasting its location altogether.

Jack Sweeney, who followed Elon Musk’s jet, now targets the billionaires after the Ukraine invasion
News
2 months ago
Next Article