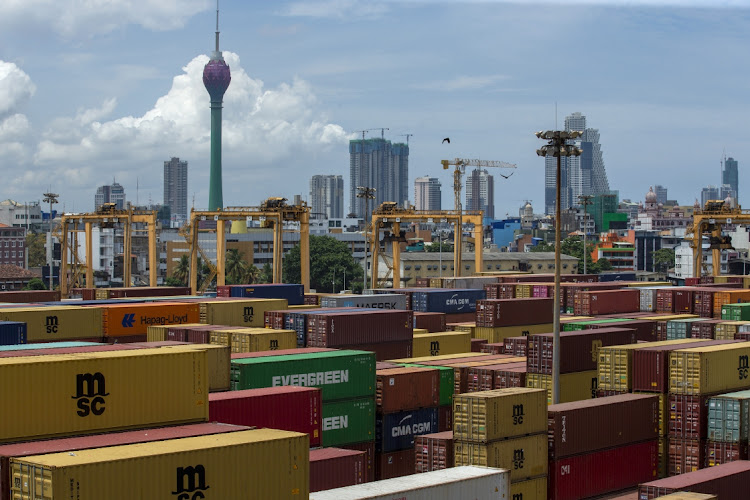 Buildings are seen over the containers at the Port of Colombo in Colombo, Sri Lanka on April 25 2022 when Sri Lanka was downgraded to selective default by S&P Global Ratings after the government failed to meet an interest payment on some of its dollar bonds last week. Picture: Buddhika Weerasinghe/Bloomberg

Sri Lanka is hurtling towards a default of its international debt and needs to restructure. Its government may be surprised to find that a group of its creditors have more than money on their mind.

One of its lenders, Nordea Bank’s asset management unit, wants to tie any agreement to climate goals, according to a letter from the asset manager to Sri Lankan authorities last month that was seen by Bloomberg. In the letter, the Helsinki-based manager outlined targets set under the Paris agreement including increasing forest cover, reducing greenhouse gases, achieving 70% renewable energy in electricity generation by 2030 and carbon neutrality by 2050.

“Sri Lanka has the unique chance to become the first country that has all its international bonds aligned to the Paris agreement,” said Thede Ruest, Nordea’s head of emerging markets debt, who signed the letter. The asset manager is seeking the backing of other creditors. To be successful it will need them because it holds less than 1% of Sri Lanka’s international debt.

Sri Lanka is in a precarious position. Unable to both service its debt and buy enough food and fuel for its population, it has stopped all payments on its foreign debt and faces its first default since independence from Britain in 1948. While the World Bank has for now stepped in to help pay for food and medicines, a debt restructure is key to winning a bailout from the International Monetary Fund.

In March, the country had less than enough dollars in its foreign exchange reserves to buy one month’s worth of imports such as food and fuel after the pandemic and then the war in Ukraine decimated its tourism industry.

The move by Nordea is the latest iteration of a trend that is slowly emerging in the fund management industry: using sovereign debt talks to push a climate agenda. In November, Belize and its creditors, with the help of US charity the Nature Conservancy, agreed a $553m restructuring that saw the government commit to spending millions on marine conservation.

Convincing countries and creditors to agree to such demands is not easy. Governments are nervous about making policy based on fund managers’ requests and bondholders might care more about making money than pushing for green commitments.

Some recent efforts have been unsuccessful. In 2020 Ecuador rejected a proposal to eliminate fuel subsidies that encouraged petrol use, and the following year Argentina resisted the chance to get lower coupon payments if it hit targets tied to UN ambitions on education and clean water.

Ruest believes that proposing goals to which Sri Lanka has already committed makes his suggestion easier to digest.

“The ESG element is becoming a recurring feature in restructurings,” said Joe Delvaux, an emerging markets distressed debt portfolio manager at Amundi, which was involved in debt talks with Ecuador and Argentina’s governments. “It is not always successful for various reasons, but it has become a difficult topic to avoid.”

Sri Lanka finance minister Ali Sabry did not immediately respond to a request for comment.

Amundi is one of the creditors to Sri Lanka and some of the debt is held in funds Delvaux oversees. The asset manager will also bring up environmental, social and governance questions when the time comes, Delvaux said.

Ajata Mediratta, president at Greylock Capital Management, a Connecticut-based hedge fund that was among creditors pushing for Belize to adopt climate goals, said bondholders are increasingly open to including such goals in debt restructurings but that it has to be something that works for both the country and its creditors.

“It is still the early days, and months of difficult work are ahead before the real negotiations begin,” Mediratta said, referring to the Sri Lanka talks.

BlackRock and Pacific Investment Management, which are among Sri Lanka’s biggest creditors, declined to comment about whether they plan to use the debt talks to push an ESG or climate-related agenda.

Options to deal with the billions owed by poor nations are disappearing, says IMF head Kristalina Georgieva
News
1 month ago

The island nation is battling its worst financial crisis since as Covid-19, mismanaged government finances and ill-timed tax cuts sap dwindling ...
World
1 month ago
Next Article