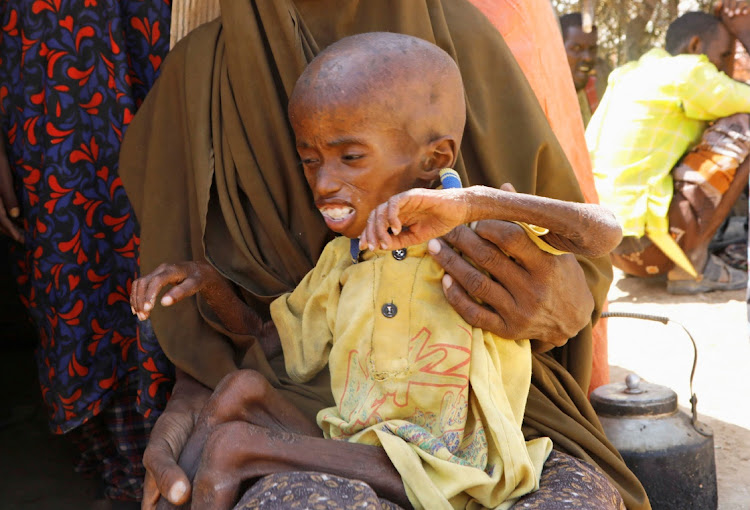 A malnourished child is seen at the Iftin Camp for the internally displaced people outside Baradere town, Gedo Region, Jubaland state, Somalia, in this March 13 2022 file photo. Picture:REUTERS/FEISAL OMAR

Islamist militant group Al-Shabaab is stepping in to help Somalian communities cope with the most severe drought in decades, a move that could bolster its ranks and raise the risk that it will intensify a violent insurgency within the country and further afield.

The group has formed a special committee comprising seven of its leading members to respond to the drought, its spokesperson Sheikh Ali Dhere said. The committee has visited communities in several drought-affected regions to distribute cooking oil, rice, sugar and other aid, pictures published by Al-Shabaab-aligned media show.

“We’re calling on Muslims all over the world to work with the committee and be part of the assistance efforts for drought-affected populations,” Dhere said.

Al-Shabaab, which wants to impose its version of Islamic law, has been trying to topple Somalia’s government since 2006, and has been kept in check by an AU peacekeeping force. Last week, it claimed responsibility for staging a mortar attack near the location of a swearing-in ceremony for Somali lawmakers. The insurgency has also spilt into neighbouring countries.

The effect of the drought on food security and internal displacement is being compounded by rising international commodity prices and a shortage of imported goods due to Russia’s war on Ukraine, and the crisis could make it easier for Al-Shabaab to recruit new members, said Nazanine Moshiri, a climate change and security analyst for the International Crisis Group (ICG).

“Vulnerable communities are more likely to hand over their youngsters in return for access to water points and aid if they are desperate,” she said.

Nine million people are at risk of sliding into famine as a result of the drought, which has affected much of the Horn of Africa, according to the UN. About six million Somalis, or almost 40% of the population, are facing extreme levels of food insecurity, double the number at the beginning of the year.

Somalia’s January harvest was the third-lowest in a quarter century, government records indicate, while UN data show households have lost about 30% of their livestock holdings due to starvation or disease since mid-2021. Water and staple food prices rose more than 140% above the five-year average in February 2022, and prices are expected to rise further due to the war in Ukraine.

More than 90% of Somalia’s wheat imports came from Russia and Ukraine before the war, but those supplies have now dried up. Somalia is also highly dependent on imported rice, vegetable oil, sugar and fuel.

“The far-reaching repercussions of the Ukraine crisis are deeply affecting the region, because of the spike in food prices, fuel and the access to certain basic commodities,” Mohamed Fall, Unicef’s regional director for Eastern and Southern Africa, said in an interview. “The weeks and months to come could be worse than what we have seen already.”

The frequency and severity of climate-related disasters are rising faster in the Middle East and Central Asia than anywhere in the world, IMF MD ...
World
3 months ago
Next Article