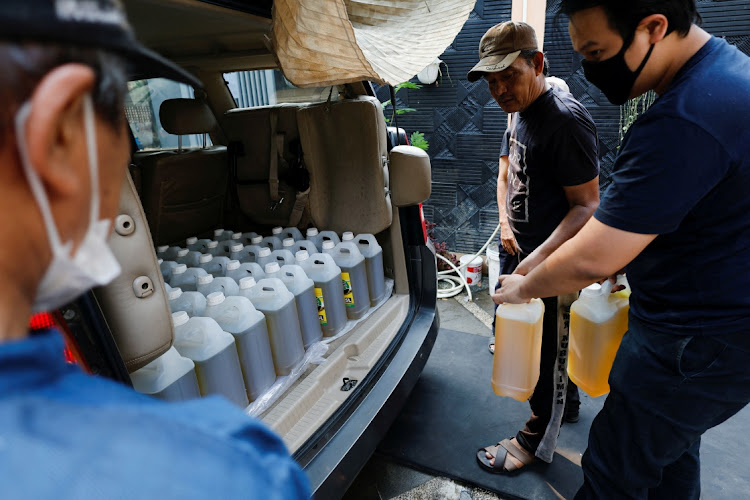 Residents prepare containers of cooking oil to be distributed to locals at a filling station after stocks ran out in Jakarta, Indonesia, March 10 2022. Picture: WILLY KURNIAWAN/REUTERS

Indonesia’s shock move to ban exports of cooking oil will reverberate across the world, threatening to push up costs for the likes of Nestlé and Unilever, as well as heightening concerns about food inflation.

The world’s biggest shipper, Indonesia, will halt some cooking oil exports from April 28 after a domestic shortage led to street protests over high food costs. This will squeeze already tight supplies of vegetable oils and add to the impact of Russia’s invasion of Ukraine, which has thrown sunflower oil trade into chaos.

While details are emerging that Indonesia’s ban will exclude some products, it still risks stoking food inflation. World food costs are at a record high and are surging at the fastest pace yet. The ubiquitous use of edible oils in everything from sweets to frying and fuel means that it could well be a thorn in the side of global food inflation for a long time to come. 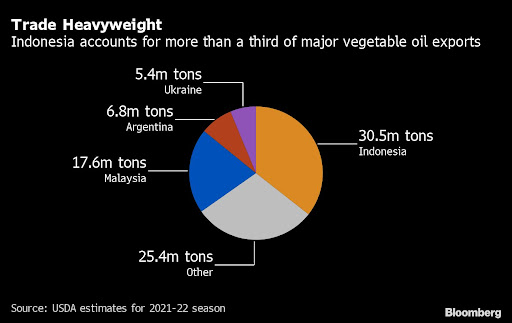 Here are the latest developments and their far-reaching effects:

The move by Indonesia, which accounts for a third of global edible oil exports, will add to turmoil facing emerging markets from Sri Lanka to Egypt and Tunisia. Even developed countries could see sharp rises in supermarket prices.

Palm oil is one of the most versatile staples, used in thousands of products from food to personal care items to biofuels. Prices of cooking oils have been on a tear due to drought and labour shortages. Then the war in Ukraine roiled trade of about 80% of global sunflower oil exports, boosting demand for alternatives such as palm and soybean oil and sending prices to record highs.

Indonesia’s ban applies to exports of RBD palm olein, a higher-value product that has been processed. Exports of crude palm oil and RBD palm oil will still be allowed, according to people familiar with the matter. RBD olein accounts for 30% to 40% of Indonesia’s total palm oil exports.

The move could increase costs for packaged food producers such as Nestlé, Mondelez International and Unilever. Nestlé declined to comment, while the other companies didn’t respond to a request for comment. It may also force governments to choose between using vegetable oils for food or biofuels.

India, the world’s biggest importer of palm, soya bean and sunflower oils, faces a further spike in inflation. Domestic prices of the edible oils in New Delhi surged between 12% and 17% since the war in Ukraine erupted late February. The government has abolished import levies and is trying to clamp down on hoarding of cooking oil, but prices are showing little signs of cooling.

“If this ban is seriously implemented, it can be highly inflationary,” said Atul Chaturvedi, president of the Solvent Extractors’ Association of India. Demand will probably shift, but the availability of other edible oils is also limited.

Indians prefer palm over other oils because it’s cheaper and can be blended easily with other fats. It also lasts longer than alternatives, making it cost-efficient for bulk users such as restaurants and hotels. Cooking oils play a starring role in feasts served during the country’s big festivals.

China is another big importer of Indonesian cooking oil. It bought 4.7-million tonnes of palm oil from the Southeast Asian nation in 2021, accounting for more than 70% of total imports. China’s purchases have slumped in 2022 on higher prices and as strict Covid-19 lockdowns hurt demand.

Compared with palm, China is more dependent on imported soya beans, which produce both oil for cooking and meal for animal feed to support the diets of its 1.4-billion population.

The export ban by Indonesia adds to headwinds for the Chinese government looking to keep inflation under control. While consumer inflation has remained relatively subdued, risks are growing because of soaring commodities prices and Covid-related disruptions to supply chains.

The export ban is a double-edged sword for Malaysia, the world’s second-biggest palm oil producer after Indonesia. Malaysian plantation players stand to gain from a surge in sales and windfall profits from the spike in prices. The country’s export revenues will probably climb.

Shares in companies including Boustead Plantations, Kuala Lumpur Kepong, IOI Corporation and Sime Darby Plantation climbed on Monday, while their Indonesian peers sank. Palm oil futures jumped as much as 7% in early trade, and then retreated as details of the excluded products emerged.

The higher costs of oilseeds will have a rippling effect across the Malaysian economy with its food inflation already at five-year highs. The government will have to fork out more subsidies to absorb higher costs of palm oil products. The ban would also curtail Malaysia’s palm oil imports, which are largely from neighbouring Indonesia, and tighten local supplies especially for refiners.

Malaysia may also struggle to fill the gap in global demand left by Indonesia as farmers grapple with chronic labour shortages that may only begin to ease from next month. Malaysia makes up about a third of the world’s palm oil supply, compared with Indonesia’s lion share of about 60%.

In the near term, the policy will probably achieve its intended effect of driving down domestic prices of cooking oil given that about 60% of Indonesia’s palm oil output tends to be exported, according to Citigroup.

It could also ease inflation expectations, Citigroup said, before indications that the ban will not be as strict as feared. If cooking oil prices revert to early 2021 levels and stabilise from there, it could reduce the bank’s inflation forecast this year by up to 0.5 percentage points.

This gain could, however, be offset by “adverse second-round impacts” like surging prices of soya bean, a substitute of palm.