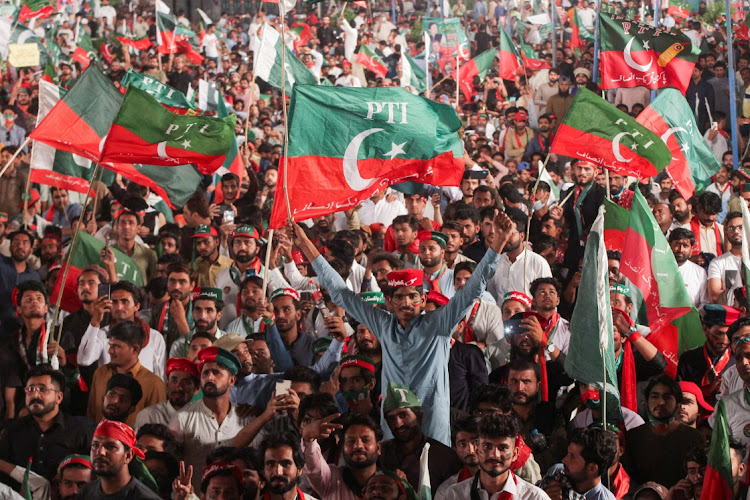 Supporters of the Pakistan Tehreek-e-Insaf political party wave party flags as they gather to listen the speech of the ousted Pakistani prime minister Imran Khan during a rally, in Lahore, Pakistan, on April 21 2022. Picture: REUTERS/MOHSIN RAZA

Pakistan has asked the International Monetary Fund (IMF) to extend its loan programme for a year and boost the $6bn funding to help ease difficulties in financing as a new government stepped in this month amid protests spearheaded by ousted premier Imran Khan.

Miftah Ismail, Pakistan’s finance minister, said the requests were made during “positive” talks with the fund for the resumption of the loan programme. The IMF has “largely agreed” to extend the current programme for another year, but details would be thrashed out during a mission visit to Pakistan next month, he said at a news conference in Washington.

The IMF suspended its loan to Pakistan in 2020 after the country failed to meet the conditions. The plan was revived last year after Khan’s administration agreed to tougher conditions, including raising oil prices and electricity tariffs, though a few months later he rolled back the increases to soothe public anger over rising living costs.

The country’s new government, led by Shehbaz Sharif, has promised populist measures and kept fuel prices unchanged this month to provide relief to its citizens grappling with Asia’s second-fastest inflation. This time, aid from the lender will be far more critical as foreign exchange reserves have fallen to less than two months of import cover.

Ismail has previously said the fuel price subsidy is “not sustainable,” and Pakistan was looking to find middle ground by reducing some expenses. The fuel pump subsidies are set to lapse in June.

In a statement, IMF mission chief Nathan Porter said both the lender and Pakistan agreed that prompt action is needed to reverse the country’s unfunded subsidies, which have slowed discussions over the unlocking of billions of dollars in aid.

Pakistan’s stocks gained as much as 1.4% on Monday, the first increase in six days, and the rupee strengthened 0.5% against the US dollar.

If the loan programme is extended and increased, it will give some comfort to investors as this may help arrest the continuous decline in forex reserves said Mohammed Sohail, CEO of Topline Securities. The opposition will “make more noise” on rising fuel prices and use this to blame the government for accepting IMF demands, but there’s limited options available, he added.

IMF’s talks with Pakistan next month will be carried out against the backdrop of protests spearheaded by Khan, who is pressuring for early elections. Under Pakistan’s laws, national polls must be held by 2023.

Since losing a no-confidence vote in April 2022 that he says was orchestrated by the US, Khan has amassed a large following of protesters across the country that shows he enjoys some support and this could deter investors if the rallies turn violent.

Washington has repeatedly denied Khan’s conspiracy claims. On Friday, Pakistan’s National Security Council (NSC), stacked with civilian and military leaders, said there was no evidence of a plot that Khan said had kicked into motion when he visited Moscow against US warnings.

The ruling came after Asad Majeed, an ex-Pakistan ambassador to the US who had written a cable to Islamabad about Washington’s take on Khan’s Moscow visit that had coincided with Russia’s invasion of Ukraine, briefed the civil and military leaders.

Khan has plans for more rallies with supporters planning a protest at the election commission office on Tuesday. At a rally last Friday, Khan said Pakistan’s economy was heading on the right path under his administration and the country would have got rid of the “IMF’s slavery.”

Instead, the US and other political parties have “toppled our government through a conspiracy,” he told the thousands of protesters who gathered in Lahore.